Head of the Carnival of Light

Looking for untainted psychics and mystics

Vanessa DeVore is a heroine in the game City of Heroes, specifically in the game's iteration as "Going Rogue". In Going Rogue, players play the roles through the alternate reality to the game's central one, with the main reality going by "Primal Earth" and the alternate one called "Praetorian Earth". In Primal Earth Vanessa had been established as a super-villainess psychically enslaving others to her will as audacious clowns, jesters, strongmen and minstrels willing to tear-apart society for the sake of an all-encompassing bacchanal, however in Praetoria, Vanessa uses her psychic powers to hide members of The Resistance, from the ever watchful psychic eyes of Praetor Shalice "Mother" Tilman - who keeps the peace by robbing problem citizens of their free-will. Vanessa dreams of a world without Mother and her thought police - The Seers, compromising the free-will of society and is one of the genuine altruists in The Resistance who tries to find alternatives to extreme measures to fight the Praetorian regime.

Vanessa's mask is haunted by the spirit of a psychic from the Renaissance era, a mutant named Giovanna Scaldi. In the main reality of Primal Earth, Scalidi possessed Vanessa when she put on the antique mask and used her as a puppet briefly, but Vanessa fought off Scalidi's control for more than a day, by which time a janitor found the convulsing Vanessa, took off the mask and called a hospital. The psychic energy that had been flowing through her brain from Giovanna's psyche' ignited powers in Vanessa as well. Though the mask would be removed, Vanessa became addicted to the rush of being possessed with all her senses at a super-human peee. She would put the mask back on, forming a willing partnership with Giovanna - sacrificing her morals for the powers Giovanna could give her - at the time to fight an alien invasion. After the invasion, Giovanna/Vanessa began building an army of psychic thralls called the Carnival of Shadows, as a ghoulish slave-army of entranced civilians dressed in kitschy circus outfits to suit Giovanna's extravagant nature - while underneath their masks their souls were smothered into submission.

With no aliens in Praetoria, Vanessa instead used Giovanna's mask to fight the Incarnate of the the angry Earth - Hamidon. Hamidon held off his attack when the aliens invaded and was defeated when discovered because of it's delay - with no delay it just invaded full-force in Praetoria changing many significant events. The meta-human Marcus Cole fought off Hamidon and made himself Emperor to protect the remaining cities from a second Hamidon attack, but adopted many oppressive policies in his run of things. Vanessa saw what was happening as Cole was just starting to implement his policies and started rounding up stray magi and psychics that would have been brainwashed into service for Cole. In Praetoria, Vanessa's linked masks allowed her to create a psychic dampening field that protected the mystics/mutants from Cole's psychic Praetor - Shalice Tilman AKA "Mother", whom the Resistance renamed "Mother Mayhem". Vanessa's psychics were named The Carnival of Light and one of the only things that give the Resistance a blind-spot to hide in.

Mother possessed another psychic named Aurora to escape near-death in her own body, but once there discovered the two psychics combined as one made them unimaginably powerful. Calvin Scott, founder of the Resistance, tells the story of seeing his beloved wife Aurora possessed but her fight against Mother is the only thing that allowed him to escape Mother's otherwise solid sense of omniscience during the merger. Vanessa and Calvin each oppose the other's methods - with Calvin in favor of radical action to tear-down the government official who possessed his beloved Aurora or others like her, and Vanessa always looking for peaceful solutions. Vanessa will not turn on the Resistance just because they need to resort to radical methods, just discourage them and Scott sees pacifism as a pipe-dream with the real-world focusing on action, but dares not make an enemy of the only woman who keeps him and his kind hidden. Vanessa offers new Resistance players a chance to oppose the Praetorian government with as little violence as possible. She is a trainer for the Resistance, appears as an adversary while working for Mother Mayhem (letting her go being an option for the mission), she appears as a major contact in The First Ward - a mystically charged no-mans-land just outside Praetoria's walls but beyond Hamidon's reach and in the Incrante Underground Trial, where she sacrifices herself to reveal a terrible truth about Hamidon.

Vanessa wants the Resistance to act less as an attack-force than a haven for those oppressed by Emperor Cole's reign. She has rehabilitated members of Mother's Seer-Network, an army of psychics "re-educated" by Mother to act as little more than additional psychic eyes and ears for the demented Praetor. Those freed from the Network are consumed by hatred for Mother and willing to tear apart society to spare the other seers from going through what they went through - aware of what is going on, but unable to control their actions as Mother moves them around like pawns on a chess-board. Vanessa tries, in addition to rehabilitating these seers, to help them move passed their hatred, but ultimately refuses to bend their wills, just try to reason with them. Mother views her as turning her beloved children against her, but Vanessa insists all she does is give them back the ability to choose their own actions, and the rampant hatred most feel comes from Mother's abusive control over her "beloved children", not her. It is unclear is Giovanna is working with Vanessa in this reality, if Vanessa won-out and Giovanna is submissive to her, if Giovanna was good too in this reality, or if the two merged completely, with Vanessa's identity just being the one they/she identifies as. What is certain is Giovanna does exist in the mask, as Vanessa's sacrifice in the Underground trial sees Giovanna carry over some of Vanessa's memories for her to the next wearer of the mask, Desdemona, on behalf of the former host; This indicates at the very least Giovanna acts at-least like a familiar to Vanessa, though to what extent is unknown. 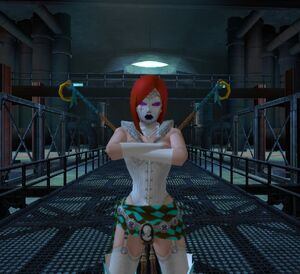 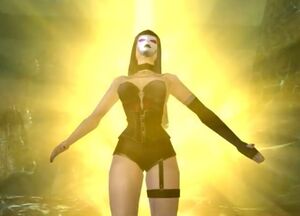 Vanessa's memories transferred from to Desdemona via Giovanna's mask
Add a photo to this gallery
Retrieved from "https://hero.fandom.com/wiki/Vanessa_DeVore?oldid=1855871"
Community content is available under CC-BY-SA unless otherwise noted.