The Vault Dweller is the main protagonist of Fallout, most famous for defeating the Master and his super mutant army, helping Shady Sands grow into the New California Republic, founding the small village of Arroyo and fathering its elder (who too would bear a child; "The Chosen One"). A lot of the canonical information surrounding the Vault Dweller comes from Fallout Bible 0, the Vault Dweller's memoirs from the Fallout 2 manual, and accounts from witnesses of the Vault Dweller in Fallout 2.

Canonically, the Vault Dweller is held up as hero that helped save the entire human race. The events that transpired canonically in the game come from his memoirs in the Fallout 2 manual. He was initially naive about the dangers of the wasteland. He eventually learned how to survive the wasteland and adopted a "kill when necessary" mindset. He cares about anyone he trusts. He however doesn't forgive easy however, as when he is exiled from Vault 13 by Overseer Jacoren, he never forgives Jacoren.

On December 15, 2161, the Vault Dweller found a settlement called Shady Sands, which was led by Aradesh. He helped fight off radscorpians that were terrorizing Shady Sands and saved Tandi, the daughter of Aradesh, from the Khan raiders, killing off the group of raiders in the process. He recruited Ian for help before leaving Shady Sands to continue to Vault 15.

Unfortunately, when Vault Dweller reached Vault 15, the entire vault was destroyed and the control room that would've held the water chip was buried underneath rocks. The Vault Dweller traveled to Junktown. Not much is known about what exactly he did in Junktown, only that he recruited Dogmeat, a dog that he grew affectionate towards, on December 30 and that he "learned the most important rule of all: doing a good thing sometimes means being a very bad person."

With clues from the Brotherhood of Steel, the Vault Dweller traveled to the Boneyard, the remains of Los Angeles. On April 30, 2162, the Vault Dweller infiltrated the cathedral, using a robe from a member of the Children of the Cathedral he killed in order to bypass security. He fought the leader of the Children of the Cathedral and the mastermind behind the super-mutants, the Master. He killed the Master and destroyed the cathedral, killing everyone inside.

After leaving the vault for a final time, the Vault Dweller wandered the desert, but never moved far from the mountains that shielded the vault from the rest of the world. Some other members of the vault, upon hearing of what happened, decided to leave the vault and join the Vault Dweller, following him soon afterwards. The Vault Dweller eventually found and rejoined this small group of former vault dwellers. Knowing little of the outside world, the group would almost certainly have died had it not been for the Vault Dweller's assistance.

Two months later, the Vault Dweller headed north, to the great canyons, with a small group of vault dwellers and wastelanders and founded a small village. Initially, they would send scouts back towards the vault, to help others who thought like themselves, but that slowly came to an end. The Vault Dweller taught the others the skills they would need to survive and grow strong. Hunting, farming and other skills to feed them, engineering and science to build their homes, fighting to protect what was theirs. Slowly, they took the knowledge that the Vault Dweller had learned on his adventure and together, they learned to thrive. Over time, their rag-tag group had turned into a tribe. The Vault Dweller fell in love with one of them, named Pat, and they raised a family, like all of their tribespeople. The construction of Arroyo was completed on August 18, 2167.

The Vault Dweller and Pat led the tribe which grew larger and stronger. In 2188, their daughter, who would later become the village elder, was born. Eventually, she and the other children became the leaders of the community.

On January 16, 2208, several years after Pat's death, the Vault Dweller wrote his memoirs. Soon after that, he vanished from Arroyo and was presumed dead. The Vault Dweller left the vault suit behind, folded on the bed, later to be placed inside the Temple of Trials. Some say the Vault Dweller was taken by the sky spirits, others say that the Vault Dweller felt it was time to move on and leave the elders to guide Arroyo to its destiny. After the One-Moon (Month) Cycle of mourning for the Vault Dweller ended, activity in Arroyo began to return to normal. Years later, the Vault Dweller's grandchild, later called the Chosen One, was born.

After leaving Arroyo the only known place where he was spotted was the town of Carbon, where he is known simply as the Wasteland Stranger. There, he helped some of the people to hide from raiders and also helped the Initiate trace the remnants of the Master's army and some Brotherhood of Steel paladins, directing him to Los. What became of him afterwards is unknown, but it is certain he left Carbon and continued his travel in the Wasteland.

After a long and fulfilling life, the Vault Dweller most likely perished from either Wasteland dangers or natural causes given the 80-year gap between Fallout 1 & 2.

Besides Arroyo and the Chosen One, the Vault Dweller's journey lived on to the extent that he is still revered by a fair portion of the people in the Wasteland. His statue is prominently displayed in the New California Republic capital, Shady Sands.

He is remembered under several names, including "the Vault Dweller" and "the Stranger" (used by those who - while believing in his greatness - doubt he ever could have come from a vault). He refers to himself as "the Wanderer" at the end of his memoirs. Children who heard of his story would often play at finding Vault 13, some of these children even grew into adults obsessed with proving the Vault Dweller's former home existed. For a time, President Tandi would even sponsor such adventurers, until giving up after many years of failure.

Even 120 years after the Vault Dweller walked the wasteland, his actions are still felt throughout places as far as the Mojave Wasteland. Super mutants such as Marcus, who had been a companion of his grandson, recount how the Vault Dweller defeated the Master.

Canonically, the Vault Dweller is male. He has a pretty normal height with a slightly muscular build. In-game, his face is not shown clearly, as he is seen as a sprite. The close up view of him is behind him at the end of the game. In his memoirs, his face looks similar to the Vault Boy, the mascot of the company, Vault-Tech. In the Fallout manual, his face looks similar to one of the three pre-made character builds, Albert Cole.

The Vault Dweller's skills and abilties are directly chosen by the player himself. He can have seven primary statistics that can have a value from 1 - 10. They are strength, perception, endurance, charisma, intelligence, agility, and luck. The player can also choose two of 16 traits that give a benefit and disadvantage to the Vault Dweller at character creation. There are also 18 skills the Vault Dweller can improve each level, three of which he can specialize in at character creation. Every three levels (four with the skilled trait), the Vault Dweller can choose a new skill to use. Canonically, the Vault Dweller most likely had a weaponized build similar to one of the three pre-made characters, Max Stone, as according to his memoirs, he killed the Master directly and raided the Marisopa Military Base to destroy the Vats.

The Vault Dweller exiled from Vault 13. 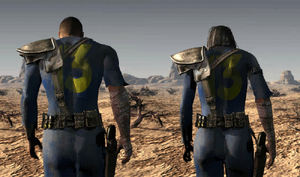 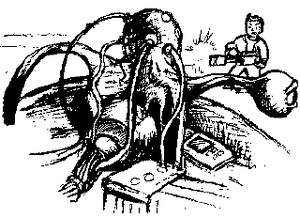 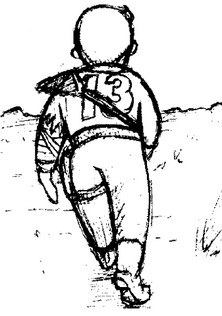 The Vault Dweller after his exile (Memoirs). 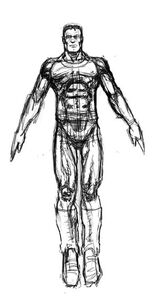 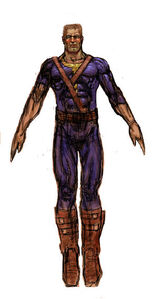 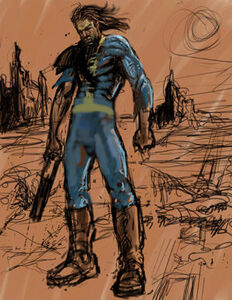 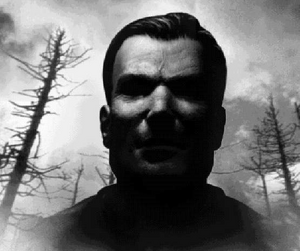