Find and kill the demon that killed her parents.

Kill all monsters in Runeterra.
Defeat the Ruined King.

Shauna Vayne, also known Vayne or The Night Hunter, is an anti-heroic playable champion in the massive online battle arena game League of Legends. A Demacian monster hunter whose family was killed by the demon Evelynn, Vayne executes her prey with vengeance and deadly efficiency, and the only happiness she ever feels comes from bringing anyone she deems a monster to justice.

She is the 76th champion champion added the game released on April 26, 2011, She commonly played on the top lane and bot lane.

She is voiced by Nika Futterman in her in-game debut, who also voiced Sticks the Badger and Luna Loud, and an unknown voice actress in all of her subsequent appearances. In the Japanese version, she is voiced by Asami Yoshida.

Shauna Vayne was born into a life of privilege in the Demacian nobility, where she was happy to explore various solitary intellectual pursuits, such as reading and learning music. Her parents were once travelers, but lived in Demacia to raise their daughter and make sure she had a happy life.

That all change on Vayne's sixteenth birthday, when she came home to find her parents gruesomely murdered, with the horned, seductive form of Evelynn smiling over them. Vayne screamed, her mind filled with a mix of emotions. Agony, terror, confusion, but most of all, hatred, and as she slowly accepted the reality of her parents' deaths she could think of only one thing: Revenge.

Magic was rare in Demacia and demons were rarer, so no one believed Vayne when she told them what she saw. However, Vayne knew exactly who was responsible, and used her resources to learn everything she could about dark magic: how it could be tracked, stopped, and destroyed. Remembering stories from her childhood about the Iceborn warriors who fought the dark minions of the Ice Witch, Vayne traveled north to the Freljord in search of a teacher. There, she was attacked by an ice troll, but was rescued by a grizzled woman named Frey, whose children had been murdered by Ice Witch's minions. Frey had no interest in Vayne's plight, but agreed to train her after seeing her resolve, which held the potential for a relentless monster hunter.

Together, they made the journey back to Demacia, and over time the two grew very close. Frey taught Vayne everything she knew about dark magic, and at the age of eighteen she had slain her first monster already. The violence awoke something in Vayne, and the sensation left the young monster hunter hungry for more.

Vayne and Frey traveled Valoran in search of Evelynn, hearing rumors of a cult that worshipped the demon's mesmerizing beauty. Hiding in the hills from the demon's priests, Vayne found herself worried about losing Frey, who she'd grown to care about as a mother figure. But before they could make a move, Vayne was ambushed by one of Evelynn's priests, who badly wounded her with a mace.

Frey had a moment's hesitation, but to save Vayne's life she transformed into a giant wolf, an animalistic form that revealed dark shamanic powers. Vayne was horrified as Frey killed the priest in her monstrous form, and when it was all over Frey tried to explain herself. However, without a word, Vayne shot Frey through the heart, remorseless after discovering who she really was.

Frey's death didn't affect Vayne like she thought it would. In fact, she didn't even give it a second thought. The only thing on Vayne's mind was the hunt, and the many monsters left for her to kill before dawn. She would find the demon that killed her parents, and in the end that would be all that mattered. Soon, every monster in Runeterra would come to fear her, which, for the first time in years, made her happy.

The Sentinels of Light

After the reawakening of Viego, the Ruined King, Vayne would postpone her hunt and battle against the undead forces of the Black Mist. Despite her hatred of magical beings, Vayne fought alongside Poppy in defense of the Great City of Demacia, and later alongside Lucian and Senna against the ruined, draconic form of Shyvana, who had fallen under the possession of Viego. After the battle, Vayne attempted to kill Shyvana in cold blood, but was stopped by Senna, who said it would be better to turn her in to the Mageseekers until they could release her from the Viego's control. When her silver bolts were deemed ineffective against the Ruined King's forces, she joined the Sentinels of Light so she'd be better equipped to fight the undead, traveling with Lucian and Senna on the rest of their campaign.

Severe, hardened and dedicated to her mission, which borders onto obsession, Vayne represents some of the darker aspects of being a hunter of monsters. Her primary desire is vengeance against the demonic monster that murdered her family, Evelyn, never stopping in trying to hunt her down, regardless of the cost, though she wouldn't harm innocent people. Further, the loss of her family has left Vayne very much a loner, mostly refusing to accept having friends, focusing solely on hunting Evelyn but she is capable of making allies and shifting priorities to more present dangers, such as Vayne joining the Sentinels and battling the Ruined King.

Due to her Demacian upbringing, Vayne has a severe distrust towards magic in general, believing it to be dangerous. It was largely because of this, Vayne killed her mentor when she discovered she possessed druidic abilities, even when she used such abilities to save her. Even after joining the Sentinels, Vayne remains distrustful of magic, as she immediately got on edge when Akshan possessed a weapon that could fully resurrect people.

Vayne as a Sentinel of Light. 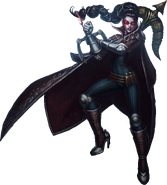