To get rich from detective work

Vector the Crocodile is a character that appears in the Sonic Boom television series. He is an anthropomorphic crocodile and a detective. He also appeared in the game Sonic Dash 2: Sonic Boom

For attire, he has a black leather jacket, a large golden chain around his neck, and black and white hi-tops. On his left arm is a tattoo of an eight-point compass rose.

At some point, Vector made it big and became the star in his own detective show directed by Dixon.

Vector was hired by Amy Rose to find her missing hammer. He and Sonic searched outside Amy's house in which Sonic found no clues, boasting he can search faster than Vector.

However, Vector saw footprints and a VIP card for Meh Burger. The two tracked back to Dave the Intern, who revealed everyone in the village has one which leads to a dead end.

After witnessing Justin Beaver storm off of the Comedy Chimp Show and finding a billboard advertising the show smashed with marks from Amy's hammer, Vector assumes Justin is the thief.

Vector and Sonic secretly watched Justin leave his house and enter the library, suspiciously being let in by Fastidious Beaver. They soon went to intercept the pop star, only to find a book club (to which Justin says he was there last night as well and keeps a secret because he doesn't want his fans finding out), which gave him a tight alibi.

The next morning, the gang continued looking around Amy's house for clues, finding a pie with the middle eaten out.

In response, Vector opened a pie festival to find a suspect, but got nothing (apart from learning that everyone ignores tip jars). This leads to an argument between Sonic and Vector, but they see Comedy Chimp joking about Wolf Sidekick not attending the festival and throws a pie at him, revealing he eats from the middle.

The two subsequently arrested Wolf Sidekick after finding the hammer in a box. However, back at his studio, Vector remained unconvinced he arrested the right guy, seeing as Amy called her hammer a "one-of-a-kind", despite Dixon's assurances.

He went back around to Sonic's shack and offered help, as the two fund out the real thief was Dixon, getting revenge for his failed career as a musical director for Justin, who then pinned the blame on Wolf Sidekick. Dixon was then arrested.

Vector is very confident in his abilities as both a detective and a TV star, always having a TV crew to back up his cases. He is very money-minded like his main series counterpart, but this is less touched upon.

He also is very insightful and often thinks outside the box to get clues or to narrow down suspects, but these plans often do not work as planned.

He has a slight ego, enough to clash with Sonic several times, but he knows when to play fair. He is also very calm and smart, but does often cut to the chase and jumps to conclusions, but this is often due to a lack in evidence. 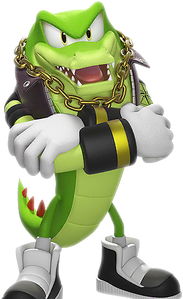 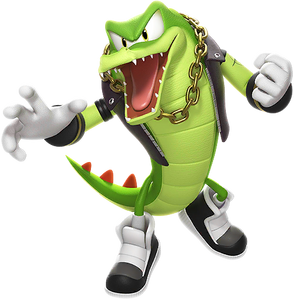 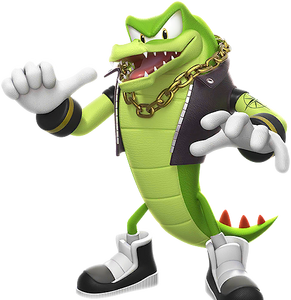 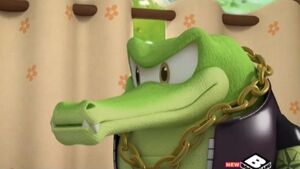 Vector in Where have all the Sonics gone. 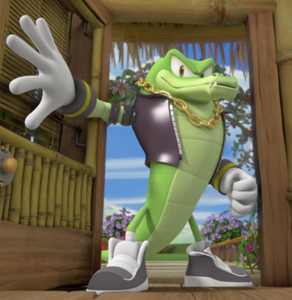 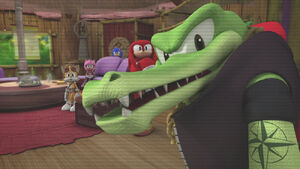 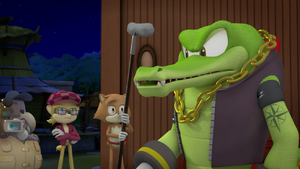 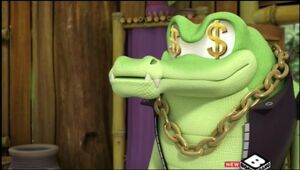 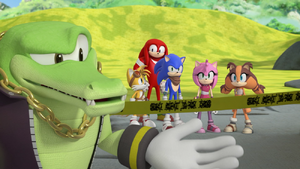 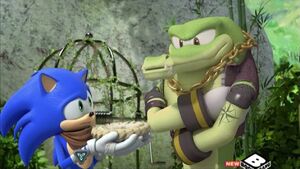 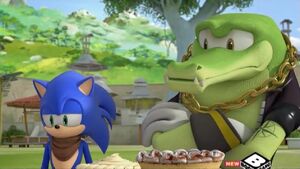 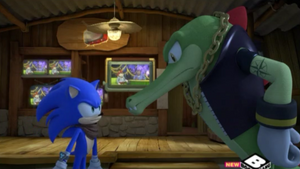 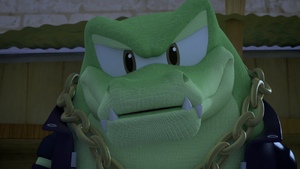 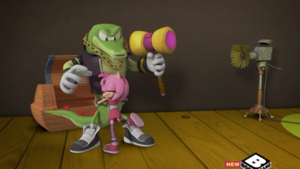 Amy hugs Vector in gratitude for finding her hammer. 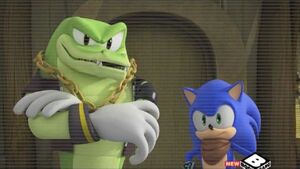 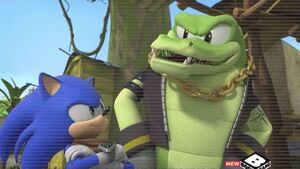