Heroes Wiki
Register
Don't have an account?
Sign In
Advertisement
in: Articles under construction, Cartoon Heroes, Genderless,
and 19 more

Queen of the cluster prime

Vega is the daughter of Vexus and the current ruler of Cluster Prime. She is voiced by Thora Birch who also portrayed Dani Dennison in Disney's Hocus Pocus.

Vega was the princess and now is the current queen of The Cluster and estranged daughter of the former Queen Vexus. She had befriended fugitive Jenny, after Jenny was able to escape out of Vexus' clutches. She and Jenny are similar as she is also a teenager and has robot friends that look just like Jenny's friends. Originally, Vega was unaware of her mother's evilness and believed her when she framed XJ-9 for stealing all of the golden computer chips. However, after discovering that all the computer chips were actually in her palace, she realized that Vexus was behind the whole thing. She and Jenny both fought her and got her to admit the crime, Vexus was later dethroned as queen and Vega took over. She asked Jenny to stay in Cluster Prime, but Jenny claimed that she belonged on Earth. Vega understood, but she wanted Jenny to come visit her sometime; Jenny happily promised to do that when she could.

When she's been raised by Vexus, whose been created by her creator, she's been born from the creator's D.N.A and kept her deactivated while she's in the Cradle. Although the creator firsthandly embedded her base attributes with all the memories that he and his wife began to when they first colonized Cluster Prime, she, like Jenny, began started out as a first synthezoid teenager.

She has dark burgundy "hair" with 2 thin black ends sticking upward. Vega's eyes are seen as yellow colored with 2 black dots for pupils, but closer inspection shows they are green. She has a thin "V" shaped chest plate with a yellow circle on it and a thin black waist. Her arms are striped into fours with thin black fingers. Vega's skirt is burgundy and green with burgundy "boots." Her only weapon are plasma swords.

When Jenny came to Cluster Prime, Vega saw her as a friend, even when she figured out that Jenny was XJ-9.

between a synthetic simulacrum of Dr. Brindlius's DNA tissue and titanium, all which are enhanced by the asecpts of Dr. Brindlius's lighter feelings of how his wife lefts himself to see the world and the cosmic power that he endowed with. 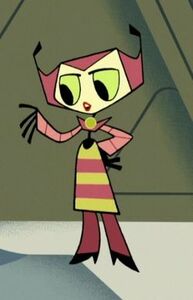