Toying with his opponents

Rescue those that Super Buu absorbed

Vegetto or Vegito (in the Funimation dub) is the result of Goku and Vegeta undergoing Potara Fusion and a hero from Dragon Ball Z.

After Super Buu absorbed Gotenks and Piccolo, Goku and Kaioshin decided that fusion was their only hope of defeating the Majin. However, there was no time to teach the Fusion Dance to anyone, so Goku was given a set of Potara earrings. He went to Earth just as Super Buu was about to destroy the planet with an enormous energy sphere. Goku threw one of the earrings to Gohan so they could fuse, but he failed to catch it and it fell into some rock. The half-Saiyan managed to find it, but Gotenks defused inside Buu, costing him about a third of his power. However, he absorbed Gohan, becoming far more powerful and Goku was left to fuse with either Mr. Satan or Dende, neither of whom would be very useful. But he sensed Vegeta’s energy and made it to his location with Shukan Ido, though Buu followed him. At first, the Saiyan prince was uninterested in fusing with Goku and at first, they tried to fight the Majin defused. However they were no match for Super Buu, Vegeta finally agreed to fuse, after hearing what had become of his family.

As he put the earring on, Goku told Vegeta that their fusion would be permanent and the Saiyan prince told him he should have mentioned that earlier. Despite this, he still went through with the fusion and they merged into one, becoming Vegito.

After testing his new body out a bit,

Vegito proved himself far stronger than his two fusees alone. He easily dealt with an attack that would have practically killed Goku and Vegeta alone and completely dominated Super Buu in combat. Having proved himself stronger in his normal form, Vegito transformed into his Super Saiyan form. Buu was impressed by the fusion’s power, but still was unconvinced that Vegito was stronger.

Vegito dealt with Evil Buu even easier than before, rendering his attacks useless and constantly assaulting him. The Majin attempted to take down the fusion by liquefying himself and forcing his way into Vegito’s body. Upon doing so, Buu made Vegito bulge to a dangerous looking size and

tried to make him afraid by saying he had control of his body. However, the fusion just used his energy to isolate Buu, then kept beating him up and eventually forced him out. Enraged that Vegetto kept taunting him, the Majin began to yell in anger, endangering the stability of the dimensions. If left unchecked, this had the potential to destroy the universe and Vegito managed to break through the shield created by

Buu’s yelling to punch him the face, stopping that from happening. Running out of options, the Majin managed to turn Vegito into a coffee-flavored jawbreaker. But this did not help,

since the fusion was still able to move and talk and proceeded to launch a powerful (and somewhat comical) physical assault against Buu. Deciding that he had enough trying to hit a small fast-moving target like Vegito in his current form, the Majin changed him back. After still getting beaten easily by Vegito, Buu’s regeneration started to reach its limits and the fusion decided it was time to end the battle once and for all. He told the Majin he had ten seconds before he finished him off and he could do whatever he wanted until that time was up. But when nine seconds were up, Vegito was engulfed by Buu’s antenna, which had been severed earlier, and absorbed into the Majin. The battle seemed over, but in actuality, Vegito had been toying around with Buu and could have wiped him out at any time.

He’d purposely been absorbed so he could save the family and friends of his fusees that had been absorbed by Super Buu earlier. By keeping himself safe with an energy field, Vegito avoided being absorbed completely, but Buu’s digestive system defused him back into Goku and Vegeta. Vegeta proceeded to crush his Potara earring so that they would not fuse again. Later on, when the two were fighting Kid Buu, Goku and Vegeta were offered the chance to fuse into Vegito once again but they refused, due to their Saiyan pride.

Vegito makes his return in Dragon Ball Super during the fight between Black Goku & Zamasu who had fused into Fused Zamasu. At first, Vegeta refused to fuse with Goku permanently, but then It was revealed that non-kais can only fuse with the potara earrings for one hour, so he went with it. Vegito dominated Fused Zamasu most of the fight, but then the potara fusion ended earlier than expected. Fused Zamasu then annihilated both Goku & Vegeta, and then went on to fight Future Trunks who had gathered a new form.

Vegito is a mix of Son Goku and Vegeta’s personalities, possessing the latter's cockiness and habit of taunting his enemies constantly. However, he also has the former's cheerfulness and easygoing attitude, so he is not as serious. Vegito also has a concern for others and tendency to do the right thing, which is a trait he took from Goku. as seen when he used his cockiness to make Buu absorb him. Vegito also possesses Vegeta’s strategic skills and Goku’s knowledge of combat, making him far more efficient in battle than both.

Vegito is extremely powerful and is considered to be the most powerful character in Dragon Ball Z, before the events of Battle of the Gods and Resurrection of 'F', later becoming one of the most powerful characters in Dragon Ball Super. He possesses enormous strength, speed, endurance, and durability, can manipulate energy in the form of flight and energy blasts, the ability to sense life energy, and the power of teleportation. Vegito has a collection of transformations, each boosting to higher levels.

Vegito has a variety of techniques he uses, all of which he takes from his fusees. These are the Big Bang Flash, though he uses a unique version of it that seems like it was combined with the Kamehameha wave. Vegito holds his hand out in front of him with the palm flat and fires a powerful energy beam. The other is the Kamehameha wave, which comes from Goku,

though his version is far more powerful and actually incinerates what it hits. Vegito can also use the Final Kamehameha, a combination of Vegeta’s Final Flash and Goku’s Kamehameha. When he uses it, he puts both his hands forward, combining the energy of both attacks and creating a large whitish blue energy sphere, which Vegito fires at his target, he can also generate blasts from each figure. Vegito has the ability to create energy constructs, he uses these as a sword and cannon. Vegito also has all the techniques of his fusees.

Even while transformed into a piece of candy, Vegito was able to keep up with Evil Buu and even give him a few good hits.

Vegito can use the Kaioken as a power booster, which can help him in times of need, he likely has the ability to combine this with his super saiyan forms, as Goku can, he can likely do the same with super saiyan blue as well.

Vegito can transform into a Super Saiyan 1 and is considered the strongest being in the universe.

The normal ki variant of super saiyan god, fist seen during his fight against fusion zamasu, as a manga only form.

Vegito transformed into this form during his fight against Fusion Zamasu 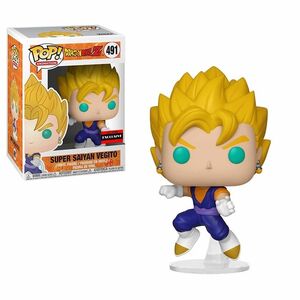 Vegito does his Final Kamehameha

The birth of Vegito