Spending time with Aqua and Terra.

Vanitas (dark part of himself)

Ventus, also known as Ven, is one of the main protagonists in Kingdom Hearts Birth by Sleep. His name means "wind" in Latin, similar to how Sora's name is Japanese for "sky". He was a Keyblade wielder before Sora ever became one, and was apprenticed to both Master Xehanort and Master Eraqus. He is the youngest of the trio formed by himself, Terra, and Aqua. In Kingdom Hearts Union χ, it is revealed that he is originally from the Age of Fairy Tales, but he has no memory of it and it is currently unknown how he ended up in the present day.

Ventus' heart was severely damaged by the creation of his doppelgänger, Vanitas, and then again when the χ-blade forged from their hearts is destroyed. Both times, Sora's heart reached out to mend Ventus's heart, and by the end of Kingdom Hearts Birth by Sleep, Ventus's heart has gone to sleep within Sora so that it can recover until it is fully healed and ready to rejoin his body, which lies comatose but safe within the Chamber of Waking. The official Japanese website refers to Ventus as the "Swift Wind Returning to Bonds".

He was voiced by Kōki Uchiyama in the Japanese version, and by Jesse McCartney in the English version.

Ventus is the youngest of the three Keyblade warriors. Personality-wise, he has many similarities with Sora; he is sweet-tempered, cheery, inquisitive, and gets excited at anything new or interesting, but he feels very disappointed whenever Aqua and Terra decline to permit him to join them on their own missions because they don’t want to put him in "harm's way." When he gives them their passes to Disney Town, he grudgingly mentions that Scrooge McDuck told him to "take two grown-ups," but he does not seem to dislike his status as the youngest of the three.

He also makes new friends easily in different worlds and really cares about his best friends Terra and Aqua, viewing Terra as an older brother. Ventus is very much unable to cope with Terra turning and subsiding to the darkness in his heart. Some of his traits and personality might have passed on to Sora when his heart joined him. Along with his kind-hearted personality, he also shows a lot of pluck, especially evident when he battles Vanitas for the last time, where he promises to fight for his companions no matter what, knowing the fact that he would lose his heart as a result.

Ventus bears an uncanny resemblance to Roxas, bearing identical facial features. Further highlighting this resemblance is Ventus's outfit, which is strikingly similar to Roxas's own Twilight Town clothes. He wears a jacket that resembles a fusion of Roxas's jacket (white on the right side) and Sora's jacket in Kingdom Hearts II (black on the left side), also reminiscent of the Yin and Yang symbol. The collar of the jacket is red and pleated, again, similar to the collar on Roxas's own jacket. Underneath this, he wears what appears to be a grey vest with a single button and several white, angular patterns on it. He wears a third layer under this, in the form of a plain, high-necked, black shirt. He also has a chunk of dull green and blue armor on his midsection that appears to be under his vest, and another piece of armor on his left shoulder.

Master Eraqus wears a similar piece of armor, though more blue-green, and more obvious. Ventus's pants are also similar to the pants Roxas wore, though Ven's balloon outward slightly before closing up about halfway down his legs, similar to caprice pants. These pants are colored in shades of grey, black, and white. He also wears an ornate, dull green and blue piece of armor on his upper-left arm, along with a black and white checkered wristband that is, once again, strikingly similar to Roxas's, but with white edges as opposed to Roxas's black-edged wristband. Like Aqua, he wears two criss-crossing straps on his chest, on which he wears a silver Keyblade Master emblem. His boots are rather odd when compared to Aqua's and Terra's, as they resemble an armored version of normal street shoes in shades of dull green and blue.

Ventus's mannerisms are also echoed by Sora and Roxas; in particular, when standing around he often places his hands behind his head, in the same stance that Sora uses. Throughout both the canonical story and the extra-canonical videos of Kingdom Hearts Birth by Sleep, Ventus echoes Sora and Roxas in various ways. For example, in the opening video, Ventus is shown falling through a Station of the Dive to the Heart due to the Kingdom Key and Soul Eater shattering the pillar, in a similar way to how Sora and Roxas fall from shattered Stations at the beginning of their games. At the beginning of his episode at the Land of Departure, Ventus falls asleep outside after watching a shooting star, and a little while later, he yawns, and then is startled to find Aqua standing over him, who giggles upon his reaction and teases him affectionately, mirroring how Kairi startled Sora awake in the original Kingdom Hearts.

When touching the piece of armor on his shoulder, Ventus becomes fully clad in Keyblade Armor. In Birth by Sleep Birth, Ventus's suit of armor shares the coloration of the pieces he normally wears, predominantly sporting shades of green and gold. In this suit, Ventus adds a yellow cape to his outfit that is discolored, almost appearing rusted. The armor on his knee is gold and bears a sharp, upward-pointing hook on the outer side of each one. Ventus's helmet has a notably different design from Aqua and Terra's, appearing more squashed and flat at the top. His helmet also has two prongs on either side of his head which point backwards and angle diagonally upward.

Strangely, Ventus's boots are colored completely gold in this outfit, as opposed to the multi-colored ones he normally wears. In Kingdom Hearts Birth by Sleep, Ventus's armor is altered. He loses his cape, his boots change to more closely resemble those in his unarmored state, and the coloration changes much more than Terra or Aqua's. Ventus's armor loses the greens entirely, now sporting steel blue, gold, and black armor, with several red lines decorating it. 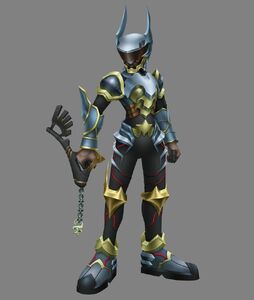 Ventus in his Keyblade Armor. 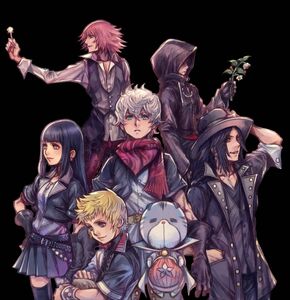 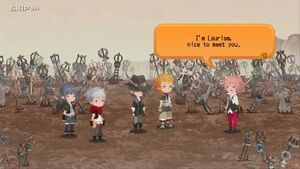 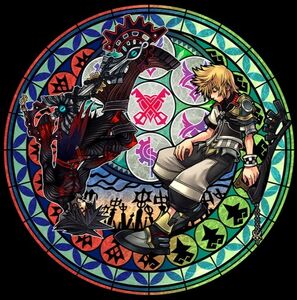