Grass Guardian
Fully Evolved Starter
Venusaur (Japanese: フシギバナ Fushigibana) is a dual-type Grass/Poison Pokémon introduced in Generation I.  It evolves from Ivysaur at level 32, after evolving from Bulbasaur to Ivysaur at level 16.  It was among several of the selected pokemon to be given a Mega Evolution during Generation VI.

Venusaur is a powerful foe in battle, more powerful than Blastoise and second only to Charizard in overall stats in terms of first generation final evolutions.  During battle, Venusaur uses its flower on its back as a power source to catch sunlight and store it as energy, which it can use to charge up several of its more powerful attacks such as Solar Beam.  Time-related moves such as Sunny Day and Rainy Day can effect the power of its attacks, with the latter hindering its attacks' power and the former empowering them. In the anime, Venusaur has been shown to manipulate nature more effectively, as it can summon vines from its back that can act as arms.

Venusaur is a large plant/dinosaur hybrid, roughly the size of a small car.  It has blue skin, with large thick legs, red eyes, cat-like ears, and a large mouth with pointed teeth.  On its back is a large flower with pink petals with white spots centered around a central brown trunk with a yellow bud.  Trunk is surrounded by four large, green palm leaves, one of which stretches over Venusaur's head, acting as a covering against percipitation.  Female Venusaurs will have a small seed growing atop the central bud.

Upon Mega Evolution, the flower becomes significantly larger, growing a second set of larger palm leaves above the original set on the central flower, and a smaller flower on its head.  Several green markings will also appear on its face between its eyes and just above its nose.  This evolved form can only be retained during a single battle, as afterwards, Venusaur will revert to its original state.

A Venusaur nicknamed "Bruteroot" and owned by a trainer named Corey appears in the Pokemon Movie Mewtwo Strikes Back!  It is the first pokemon to battle against Mewtwo, after the latter reveals that he plans to confiscate and clone all the trainer's pokemon.  Bruteroot is swiftly defeated by Mewtwo's cloned Venusaur (which was in fact a mature clone called BulbasaurTwo) and is swiftly confiscated.  Alongside Ash's Charizard, and another trainer's Blastiose, they were the only pokemon that were not cloned.  After Ash is petrified in the middle of the big battle against the original and cloned pokemon.  Both Bruteroot and the Venusaur clone become deeply saddened and alongside the other pokemon, their tears revive Ash.  The Venusaur clone leaves alongside Mewtwo, after the latter decides to erase the incident from everyone's mind, while Bruteroot and Corey return from the place where they came prior to the incident.

In Pokemon Battle Frontier, the Palace Maven Spencer owns a Venusaur as his primary pokemon.  When not in battle, his Venusaur releases a Sweet Scent to drive off wild Beedrills, which Spencer consdiers pests.  In its battle with Ash, Spencer's Venusaur is the second to be summoned by him.  It manages to defeat Ash's Heracross, but loses against his Swellow.

May's Bulbasaur is revealed to have evolved into a Venusaur after returning from a long absence away from Ash in the episode "Pruning a Passel of Pals!".  She summons her Venusaur to use in battle with another competing coordinator's Marill during the Battle Stage of the Wallace Cup Pokemon Contest. 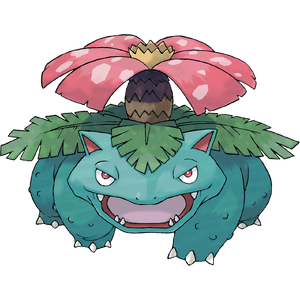 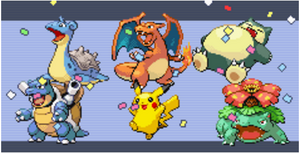