Norm of the North

Vera Brightly is a investor working under Pablo. Vera is the mother of Olympia Brightly.

At first, she was head of market for Greene Homes under Mr. Greene. Vera is a problem solver, she advertises the sales for Greene Homes as she was planning to help Mr. Greene sell the arctic. When Norm came to New York City, she thought he was another human in a polar costume, unaware that he's real and he's here to save his home. Vera only worked for Mr. Greene to support her daughter, Olympia, and requested Mr. Greene to get her attended to Magister Mundi Academy because its impossible to get in without an alumni recommendation.

Vera was aware that building condos in the arctic will be hazardous to the environment, thanks to Norm's recommendation, she send an e-mail to Mr. Greene explaining her resignation. When Norm reveals Mr. Greene's scheme, Olympia and Vera were able to spend more time together, as where Olympia suggested that Pablo will make a great boss. 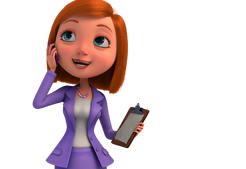 Retrieved from "https://hero.fandom.com/wiki/Vera_Brightly?oldid=1624631"
Community content is available under CC-BY-SA unless otherwise noted.