Reptile (constantly mistakenly referred to as an amphibian, to his aggravation)

Leader of the forest animals (formerly)

Co-leader of the forest animals

Keep the other animals safe from humans.

Verne is the tritagonist of the Over the Hedge franchise. He is the deuteragonist of Over the Hedge, and a minor character of Hammy's Boomerang Adventure. He is a wise, paranoid, and short-tempered box turtle who is the former leader and current co-leader of a group of forest animals and RJ and Hammy's best friend.

He was voiced by the late Garry Shandling (in his only fully animated role) in the film and short film and by Drew Massey in the video game.

Verne is a "naturally tentative" box turtle, who is the leader of the foragers. He does not have much emotion when he talks. He has his own ways of doing the daily tasks which everyone else goes for, but his world is turned upside down when RJ introduces his chaotic lifestyle into the mix. He never really trusted RJ (and he was kind of right for not trusting him). He is genuinely caring for his family and will do anything to protect them. He is best known for his "tingling" tail when a situation is not right, which he uses as a sign to back off. After RJ saves them at the end, he gives up his place as leader to RJ, whom he has finally accepted into their family.

Verne and the other animals have woken up from hibernation. As Verne and the others eat berries they have found, Hammy sees a hedge and brings the other animals to it. Not knowing what it is, they name it Steve. They then hear Steve "talking" (which is really a woman behind the hedge yelling at her son). Verne goes to the other end of the hedge and becomes victim to several accidents, such as getting sprayed by a hose and hit by a hockey stick, sending him flying over the hedge.

It is then that RJ the Raccoon appears and reveals what Steve is actually called, before telling the animals of all the food that the humans have. Verne is uninterested, but the others agree and during the night, they eat the leftover food inside a garbage can, but Gladys Sharp arrives and chases them off. This makes Verne be wary of the humans.

The next day, RJ uses Hammy's help to get a wagon full of cookies by making Hammy pretend to have rabies. When the two girls who have the wagon see Hammy, they start to attack him, hitting him with a book and spraying him. Upon seeing this, Verne comes to help, but ends up flying out of his shell and onto one of the girl's face. He falls off and the girls see his naked butt and flee. He then realizes he is nude and puts his shell on. They then flee as Gladys arrives, who starts to believe that the animals are vermin that are spreading infections.

RJ leads the animals on more raids, prompting Gladys to call the Verminator, a man who exterminates animals. Verne decides that to keep the humans from killing them, he must return the food. RJ tries to stop him, but they are chased by a dog and they fly into the air, and the food lands on Gladys' car, blowing it up. After Verne reveals he was the one responsible for losing the food, the other animals get angry at him, but RJ helps them reconcile. Verne helps in a plan to steal from Gladys' house, but during the attempt, RJ tries to steal some spuddies. When Verne tries to stop him, thinking they have enough, RJ reveals he has to take the food to Vincent because he lost all of Vincent's previous food at the beginning of the film, and both Gladys and the Verminator arrive on the scene.

Verne and the animals are captured, except RJ who escapes with the food. However, RJ comes back, pushing the food in front of the van carrying the animals, knocking out the Verminator. However, Vincent arrives and, enraged at all the food being destroyed, attacks them, but gets caught by several balloons and floats away. However, when they reach home, Vincent lands, and he, Gladys, and the Verminator all attack. In the fight, the bear and the two humans get caught in one of their own traps, and while Vincent is taken to the Rockys, Gladys and the Verminator are arrested for using illegal traps. Verne then welcomes RJ to stay with them as part of the family. 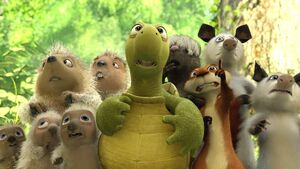 Verne and the animals noticing the hedge for the first time. 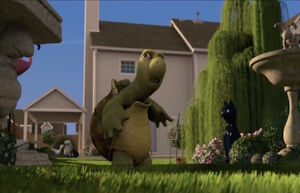 Verne venturing out of the hedge. 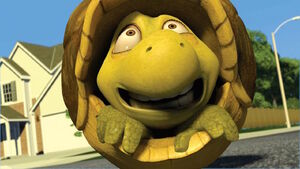 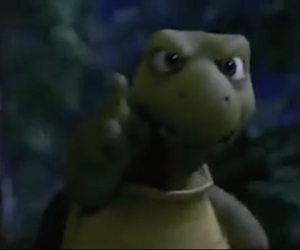 "I think we speak for the whole family when I say that we want NOTHING to do with ANYTHING that's over that hedge!" 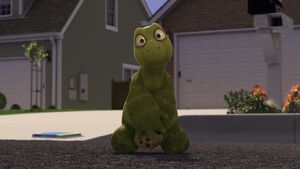 Verne without his shell. 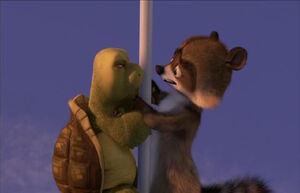 Verne glaring at RJ as both are about to plummet several meters from the sky. 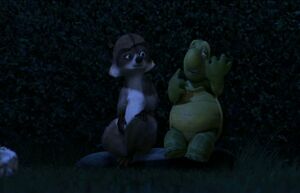 Verne regretting losing all the food. 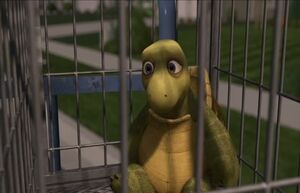 Verne caged by Dwayne, dejected and feeling like RJ betrayed him 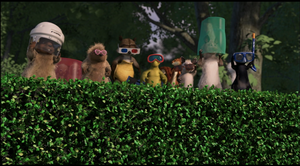 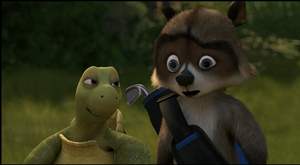 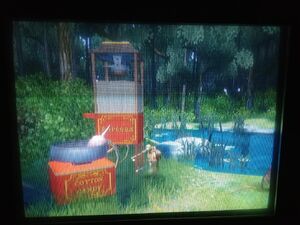 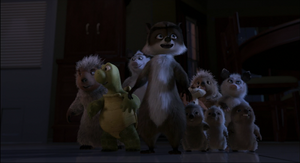 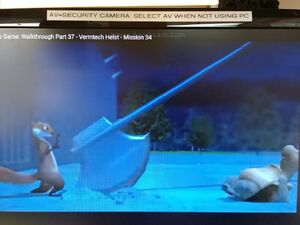 Retrieved from "https://hero.fandom.com/wiki/Verne?oldid=2096472"
Community content is available under CC-BY-SA unless otherwise noted.