Covering stories.
Having sex with her boyfriend, Seth (formerly).

Be loved by her boyfriend, Seth (failed after his death) .

Veronica "Ronnie" Quaife is the secondary protagonist in David Cronenberg's 1986 remake of The Fly, played by Geena Davis who also played Barbara Maitland in Beetlejuice, Regan MacNeil in The Exorcist (TV series), and Mrs. Little in Stuart Little.

For Veronica's brief cameo in The Fly II, Saffron Henderson took over the role. The character of Quaife was played by Ruxandra Donose in Howard Shore's 2008 opera, "The Fly", in its premiere at the Théâtre du Châtelet in Paris.

Veronica Quaife met Stathis Borans in college, where he was her teacher. Although Veronica majored in science, Borans sparked her interest in journalism. The two became lovers, and lived together for two years, but eventually broke up. However, they remained very close, and Veronica eventually found work as a journalist for Particle Magazine where Borans served as editor. Hoping to find a good story, Borans sent Veronica to a meet-the-press party held one night by Bartok Science Industries.

There, Veronica met Seth Brundle, a socially awkward and eccentric scientist who claimed that his latest project would change the world. At first dismissive of Brundle, Veronica was eventually won over by the strength of his conviction, and went with him to the warehouse which served as Brundle's laboratory and living space. Brundle revealed that he had developed a working teleportation system, then demonstrated the Telepods for Veronica by using one of her stockings as a test object.

Amazed, Veronica realized what an important story she had stumbled upon, but was surprised to learn that Brundle thought their meeting—and the Telepod story—was off-the-record. Regardless, Veronica took the story to Borans who later dismissed Brundle as a con man. When Brundle arrived at Borans' office to try to change Veronica's mind about breaking the story, he was relieved to discover that Borans didn't think it worth pursuing. Brundle then took Veronica to lunch and explained that the Telepod project was not yet ready to become public knowledge, since only inorganic matter could be teleported successfully.

Brundle then made a deal with Veronica: he would allow Veronica an insider's access to his work on the Telepods (with her end goal being a book documenting the project) in exchange for her keeping the project's existence quiet. Veronica accepted Brundle's offer, but when she later discovered Borans (who still owned a key to her apartment) in her shower, she attempted to keep the arrangement secret from her ex-lover. She also began to realize that Borans was not ready to give her up and was becoming quite possessive. Angered by Borans' intrusion into her home, Veronica took back her apartment key from him.

Soon after, Veronica began documenting Brundle's work on the Telepods with video cameras and extensive notes. Following a disastrous experiment in which a baboon was turned inside out during the teleportation process, Veronica interviewed Brundle and encouraged him to reveal his feelings on-camera. Later, she vocalized their mutual attraction, and initiated their first sexual encounter. After Brundle accidentally rolled onto a circuit board in bed, Veronica made an off-handed comment about the nature of living flesh.

This gave Brundle the inspiration he needed to reprogram the Telepods to successfully teleport living matter. Veronica then went out and bought Brundle (who wore five identical sets of clothes so as to avoid wasting mental energy thinking about what to wear) a new set of clothes, but encountered a half-crazed Borans at the store she was shopping in. Borans suspected that Veronica was still pursuing the Telepod story, and had followed her to Brundle's warehouse. Jealous of Veronica and Brundle's romance, Borans made a spectacle of himself in public, and Veronica angrily demanded that he not pry into her personal life.

Meanwhile, Brundle's epiphany proved successful, as a second baboon was teleported with no ill effects. As they began to celebrate, Veronica suggested that they take a romantic vacation together. However, she then discovered a package that had been hand-delivered to Brundle's warehouse, which contained a mock-up Particle cover featuring Brundle and the Telepod story.

Realizing that Borans intended to ruin everything, Veronica hastily left to confront him without explaining the situation to Brundle (so as to avoid hurting his feelings). Arriving at Borans' office, Veronica again told him to stay out of her affairs and Borans agreed to hold off on publishing the Telepod story as long as she would agree to keep him informed on the progress of the project.

Returning to the warehouse some time later, Veronica discovered that Brundle had teleported himself without her as a result of his paranoid fear that she was still seeing Borans romantically. Despite Veronica's shock at Brundle's recklessness, the two reconciled and made love. The next morning, Veronica awoke to discover a strangely energized Brundle performing a series of highly complex gymnastic exercises. The two later went shopping, and Brundle bought Veronica a necklace with a heart-shaped charm (despite her earlier assertion that she never wore jewelry).

Soon, though, Veronica became concerned by Brundle's increasing manic and aggressive behavior, and after a lengthy lovemaking session, she also discovered some coarse hairs growing out of the circuit board-induced wound on Brundle's back (which she trimmed off with a pair of scissors). The manic Brundle then tried to force Veronica to undergo teleportation, likening it to an invigorating drug, but Veronica, realizing that something had gone wrong during Brundle's teleportation, refused. Angered, Brundle abandoned Veronica and stormed off into the night.

Veronica then took the hairs she'd trimmed from his back to a lab for scientific analysis. The next morning, Veronica returned to the warehouse to discover Brundle attempting to force a young woman named Tawny—whom Brundle had picked up in a bar and slept with—to undergo teleportation. Veronica's arrival prevented this, and Tawny left the warehouse. Veronica then told the ill-looking Brundle that the hairs growing out of his back were not human in nature, but Brundle angrily dismissed her concerns and threw her out of his lab, telling her not to return.

A tearful Veronica left the warehouse and was not successful in contacting Brundle for the next four weeks. Finally, he telephoned her, and said that she'd been right about his condition all along. Arriving at the warehouse, Veronica was shocked to discover a deformed and sickly Brundle, who explained that a housefly had slipped into the sending Telepod with him during his first teleportation and that he and the fly had been accidentally fused together at the genetic level.

Veronica then watched in disgust as Brundle vomited a digestive fluid onto a donut and was horrified as his right ear fell off. Veronica then sought out Borans for advice, and he became her confidant during this crisis. She visited Brundle once again, and was emotionally overwhelmed by the rapidly accelerating bizarreness of his condition. By now, Brundle had realized that he was slowly transforming into a human/insect hybrid, which he dubbed "Brundlefly." To her horror, Veronica then discovered that she was pregnant with Brundle's child, and could not be certain if the baby was conceived before or after Brundle's genes were altered.

These fears were crystallized by a nightmare she had, in which she gave birth to a giant maggot while getting an abortion. Veronica went to Brundle's warehouse to tell him about the baby, but found herself unable to do so after seeing Brundle in an even more malformed state than before. When Brundle, who was also slowly losing his human compassion and reason, told her to leave him and never return, a tearful Veronica exited the lab and told Borans (who was waiting outside) that she wanted an immediate abortion.

Then, they visited Borans' friend, Dr. Brent Cheevers, who agreed to terminate the pregnancy despite the lateness of the hour. However, Brundle, who had overheard Veronica and Borans discussing the abortion outside the warehouse, crashed into the clinic and abducted Veronica.

On a nearby rooftop, Brundle begged Veronica to have the baby, since it might very well have been conceived prior to his fusion with the fly, but she sadly replied that she was too afraid to risk giving birth to a mutant. Arriving back at the warehouse, Veronica watched in shock as Brundle leapt through the lab's open skylight and pounced on Borans who had entered the lab armed with a shotgun with the intent of rescuing Veronica.

The crazed Brundle dissolved Borans' left hand and right foot with corrosive vomit, and only Veronica's pleading prevented him from killing Borans. Brundle then revealed his last-ditch plan to her: he intended to use the Telepods to fuse himself with Veronica and their unborn child. The desperate and unhinged Brundle believed that this would make them the "ultimate family." Veronica resisted, and in the ensuing struggle, she accidentally ripped off Brundle's jaw, prompting his final transformation. The now-mute "Brundlefly" threw Veronica into Telepod 1 and stepped inside Telepod 2. However, the wounded Borans used his shotgun to sever the power cables connected to Telepod 1, allowing Veronica to escape unharmed.

Seeing this, Brundlefly attempted to break out of Telepod 2 just as the fusion sequence occurred, and was intertwined with chunks of metal and other components from the sending pod. As the mortally-wounded Brundlefly-Telepod fusion creature crawled out of the receiving pod, it silently asked Veronica to end its agony with Borans' shotgun. A devastated Veronica hesitated for a moment, and then pulled the trigger, mercifully ending the life of her once-human lover.

Several months later, Veronica came under the care of Brundle's employer, Anton Bartok, and was staying at the main Bartok Science Industries facility. Having been convinced by Bartok to carry the fetus to term with his assurance that the birth would be normal, Veronica went into a painful and difficult labor.

After seeing that she'd given birth to a squirming larval sac (which contained the baby who would be named Martin Brundle), Veronica went into cardiac arrest and died. 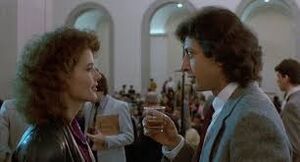 Veronica and Seth met at the party 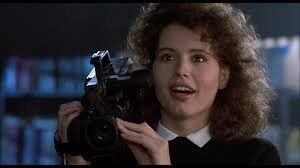 Veronica was on interview of Seth's work 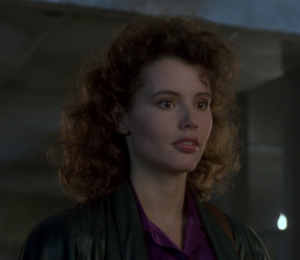 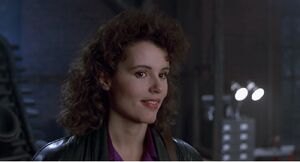 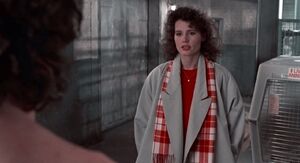 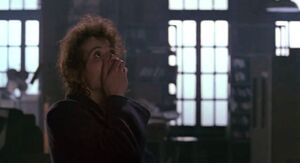 Veronica was shocked that Seth can climb 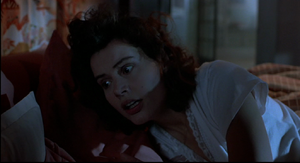 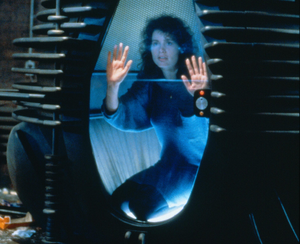 Veronica was being held

Veronica has no choice, but to kill her former lover Seth 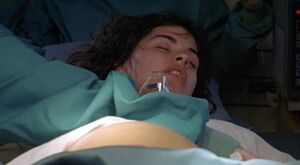 Veronica's death after giving birth in The Fly II.
Add a photo to this gallery

Retrieved from "https://hero.fandom.com/wiki/Veronica_Quaife?oldid=1863616"
Community content is available under CC-BY-SA unless otherwise noted.