Vexen, the Chilly Academic (いてつく学究 Itetsuku Gakkyū?, lit. Freezing Scholar), is a major antagonist in the Kingdom Hearts video game franchise. He is the Nobody of Even and is Rank IV within Organization XIII amd a reserve member of Real Organization XIII. He controls ice and uses it to command storms and blizzards, freezing his opponents solid, while defending himself with his massive shield.

Vexen was the highest ranking member of the Organization inside Castle Oblivion, but ironically he is the first Organization member to be eliminated. He created the Riku Replica and uses the Replica to carry out several experiments on Riku and Sora. Vexen appears in first Kingdom Hearts Chain of Memories. He appears in Kingdom Hearts 358/2 Days as a playable character in Mission Mode. In Kingdom Hearts 3D: Dream Drop Distance it's revealed that he along with several other Organization members have been revived as their original selves. Because of this, he even redeemed himself and became an anti-hero. 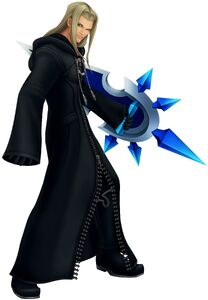