Living in peace in Smurf Village.

Vexy and Hackus' goals: To get Smurfette back together as brother and sister (succeeded).

Vexy's goal: To become real a Smurf along with Hackus like Smurfette and fall in love with Grouchy Smurf (succeeded).
Vexy and Hackus' goals: To live in peace in Smurf Village (currently; succeeded).

Vexy and Hackus are major antagonists-turned-tritagonists of the 2013 sequel The Smurfs 2. Vexy and Hackus originally were Naughties created by Gargamel to serve him and his evil purposes, which include capturing Smurfette so that she would give the evil wizard the secret formula that would change the Naughties into Smurfs. However, when Vexy and Hackus did become Smurfs, they would soon be used as part of Gargamel's Smurfalator for extracting Smurf essence.

Vexy is a female mischievious being that was grey along with Hackus, she wants to find Smurfette to spend the time with her as sister with the help of her brother Hackus. Hackus is a male mischievious being who has a goofy tongue with bad taste of prank. He wants to reunite his sister Smurfette back together as siblings, they are better known for their tricking skills to spend the time with Smurfette.

Gargamel turns Vexy and Hackus into real Smurfs like Papa Smurf before him, he tried to destroy the Smurfs, but Drake, his father manage to rescue the Smurfs, Smurfette, Vexy and Hackus from Smurf essence by overpowering Gargamel and order Smurfette to send Gargamel back to his house on the Smurf Village. 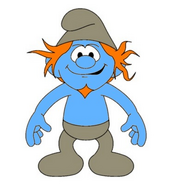