Vi, also known as The Piltover Enforcer, is a heroic playable champion in the MOBA game League of Legends and one of the two main protagonists of its 2021 Netflix animated spin-off prequel series Arcane, which details her past of trying to reunite with her sister, Powder.

Orphaned at a young age, Vi grew up in Zaun and followed a life of crime, carefully honing her survival instincts over many years. Though she usually dislikes authority figures, Vi now offers her skills in service of Sheriff Caitlyn Kiramman to hunt down deadly criminals, maintaining the peace in Piltover with a hotheaded nature and mighty Hextech gauntlets.

The champion added to the game, Vi was released on December 19th, 2012. she is usually played as a jungler.

In Arcane, she is portrayed by Hailee Steinfeld, who also portrays Gwen Stacy in Spider-Man: Into the Spider-Verse, Charlie Watson in Bumblebee, Kate Bishop in Hawkeye, and Mattie Ross in True Grit.

To Vi, every problem is just another brick wall to punch through with her gigantic hextech gauntlets. Though she grew up on the wrong side of the law, Vi now uses her criminal know-how to serve Piltover's police force. Vi's brash attitude, abrasive humor, and blatant refusal to follow orders can often infuriate her by-the-books partner, Caitlyn Kiramman. But even the sheriff of Piltover cannot deny that Vi is an invaluable asset in the fight against crime.

As a child growing up in the lawless outskirts of Piltover, Vi learned to rob and cheat to get by. Stealing and stripping hextech hardware gave her the skills of a master mechanic, while life on the streets taught her self-reliance. When she was six, a ragtag group of criminals took a shine to the young delinquent and brought her into their fold. By the time Vi was eleven, she had become a seasoned accomplice, and she relished the thrill of every heist.

Vi's attitude changed when a raid on a mining facility went bad. She was forced to decide between fleeing with her crew or trying to save the innocent mine workers from a collapsed tunnel. Vi chose to play the hero. While searching for a way to free the mine workers from the rubble, she discovered a damaged robotic mining rig. Improvising, she wrenched off its huge fists and modified them into makeshift hextech gauntlets. Fitting the heavy weapons to her tiny hands, the young girl flexed her arm and threw a powered punch at the rubble. The force of the blow blasted away the rock. With the workers free to escape, Vi fled the scene.

After that job gone wrong, Vi severed her connection to the crew. She returned to a life of solitary crime, but stole only from other criminals. As the years went by, Vi modified and improved her hextech fists, allowing her to bust up heists and snatch loot with ease. Eventually, word of her notoriety reached Caitlyn, the famed Sheriff of Piltover. Rather than seek Vi's arrest, Caitlyn offered the criminal a way to pay her debt to society: work for the law in Piltover. Vi laughed. To her, a job that let her beat up crooks without forcing her to run from the cops sounded perfect. She immediately accepted. Caitlyn now struggles to keep Vi in line, and Vi treats Caitlyn's orders as mere suggestions, but when they work together, they are feared by all lawbreakers in Piltover, except Jinx.

Vi appears in the series as the main protagonist, and is first introduced as a child lost in a war zone, which occurred at a bridge during a skirmish between Piltovan Enforcers and Zaunite rebels. Leading her sister, Powder, through the debris, they soon come across the bodies of their dead parents, who were presumably killed on the bridge by Enforcers. Breaking down into tears, the sisters are rescued by Vander, the leader of the revolt, who adopts and cares for them in the following years.

While Vander would retire from his fighting days, he would keep his cast-iron gauntlets and taught Vi everything he knew about fighting in hopes that she could defend herself, and over time she grew into a highly-skilled brawler. Vander would also take in two boys, Mylo and Claggor, who became Vi and Powder's adoptive brothers. The three children would come to view Vi as a natural leader for her fighting ability and street smarts, and together they frequently ran into trouble.

One day, however, trouble caught up to Vi when she and her friends accidentally destroyed a building in the upper city, which happened when Powder dropped a volatile crystal during a heist in Jayce Talis's apartment. Vi and the others fled the scene, but lost all their loot after a brawl with Deckard's gang, leaving them to return to Vander emptyhanded. Mylo blamed Powder for the lost haul, but Vi defended her sister, saying that she was still young. She also comforted Powder later that night, telling her that she's strong even if she makes mistakes, and told Powder to keep the stolen crystals a secret between them.

Vander, having learned of the explosion, lectured Vi for stirring up trouble with the Enforcers, hoping to teach her a lesson about responsibility. However, Vi believed that they should fight back against the Enforcers, since they had no right to continue oppressing them in the Lanes. Later on, Vi learned from Ekko that Vander had made a deal with Sheriff Grayson to maintain an uneasy peace between the two cities, but when she confronted him about it, he explained that he made the deal out of guilt after learning the cost of war. After hearing this, Vi realized she couldn't put her family at risk any longer and decided to turn herself in for destroying the apartment.

Before she could do so, Vander arrived and had Grayson arrest him in Vi's place, despite her protests. However, events took an unexpected turn when Grayson was attacked and killed by a Shimmer-mutated Deckard and the crime lord Silco, an old enemy of Vander's. Unable to fight back in cuffs, Deckard easily captured Vander as Vi watched helplessly from the window. Later on, Ekko released Vi and told her where Vander was being held, and she prepared a rescue mission, taking Mylo and Claggor with her. Not wanting to put Powder in danger, she left her sister behind.

Unfortunately, Vander's location was a trap set up by Silco, as he planned to have Vander's family killed along with him to tie up loose ends. Vi engaged Silco's henchmen using Vander's gauntlets and managed to defeat the majority of them, but was overpowered by the mutated Deckard. For safety, she hid in the room with Vander and her brothers, but right when they were about to escape they were caught in an explosion. The blast killed Mylo and Claggor and injured Vi, leaving her trapped under the heavy iron door and a pile of rubble. To protect her, Vander fought Deckard but was stabbed by Silco and forced to drink Shimmer to survive, transforming him into a hulking beast. With his newfound strength, Vander rescued Vi and jumped out of the building, but he died shortly after the fall, leaving Vi devastated.

Learning that Powder had caused the explosion that killed their family, Vi lashed out at her, slapping her and calling her a "jinx". But though she was angry, Vi immediately felt remorseful for hurting Powder and walked away to calm down, ignoring Powder's cries for her to come back. After a short time, Vi looked back towards Powder and saw Silco standing over her sister, knife in hand. Before she could come back, the Enforcer Marcus chloroformed and arrested her, telling her she would be killed if Silco found her.

Vi spent the following years in Stillwater Prison, where she was regularly mistreated and beaten despite having never received a trial and being presumed dead by everyone who knew her. Traumatized by the night she lost everything, Vi believed that Silco had killed her sister and blamed herself for leaving her, but remained hopeful that Powder could still be alive. Hoping for the day she could one day return to her, Vi remained abrasive and defiant to the Enforcers, training every day and receiving a variety of tattoos as she became hardened by the terrible life in Stillwater.

One day, Vi was questioned by Caitlyn, an Enforcer who wanted information on Silco's attacks during a Progress Day celebration. Vi was initially hostile towards Caitlyn, but began to cooperate when she recognized graffiti that matched Powder's art style from when they were kids. Vi was then released from prison so she could guide Caitlyn through the undercity. Despite not knowing the purpose for Caitlyn's investigation, Vi was determined to find Powder, who she believed was being imprisoned somewhere by Silco. 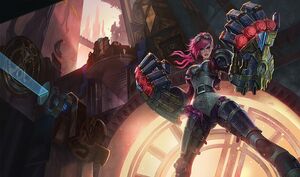 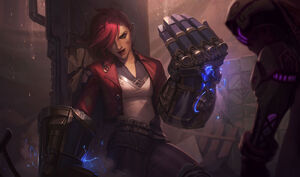 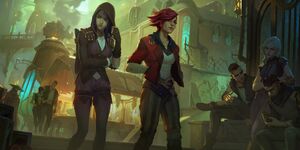 Vi and Caitlyn in Legends of Runeterra. 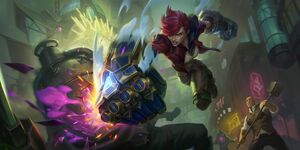 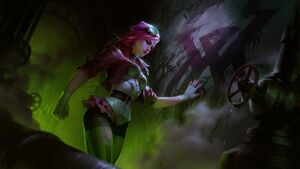 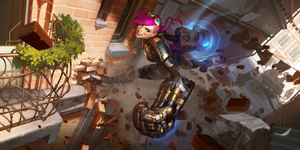 Vi as she appears in Legends of Runeterra. 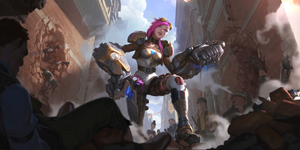 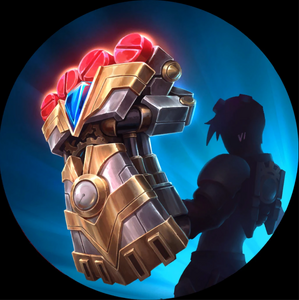