Portrayed by actor Carlos Valdes, Vibe made his live-action debut on the Green Arrow television series Arrow, and is a starring character in the spin-off series The Flash.

When Aqua-Man disbanded the original Justice league, Cisco Ramon gave up being the leader of a local street gang called Los Lobos and joined the Justice League. Cisco had a metahuman ability to emit powerful vibratory shock waves and became a vigilante known as Vibe. Aqua Man and Martian Manhunter started to have doubts about the new JLA with Vibe's presence in the team since the League got involved in a battle with Los Lobos' rivals. Vibe proved himself worthy to be in the team during the JLA's battles against Cadre, Anton Allegro, Amazo, and Despero. Vibe got killed by Professor Ivo's androids after the JLA was disbanded and was the first member to killed in the line of duty. The Martian Manhunter brought Vibe's body to the JLA's mountain sanctuary where Vibe was laid to rest in a cyrogenic chamber. Unfortunately, Vibe's dead form was resurrected twice by evil doers.

In the Trinity maxi series, Vibe was alive and a member of the League. Vibe was killed by an energy blast after Batman, Superman, and Wonder Woman returned. In the Blackest Night story line, Vibe was reanimated as a member of the Black Lantern Corps and attacked his former colleagues Gypsy and Vixen with Black Lantern Steel until Doctor Light was forced to destroy him.

Carlos Valdes plays Cisco Ramon on the CW's Arrow and The Flash series. Cisco appeared as a guest in the Arrow episode "The Man Under The Hood" and is a series regular on The Flash. In this version, Cisco is a mechanical engineer working for Star Labs who enjoys naming the evil villains that attack Central City and loves girls who are attractive. Cisco designed technology to help the Flash, Arrow, Atom, and Black Canary in their crime fighting crusades. In season one, Cisco, Barry, Joe, Eddie, and Caitlin learned that their beloved hero Dr. Harrison Wells was actually the sinister Eobard Thawne pretending to be him all alone. Cisco's intelligence and knack for wanting to find answers exposed all of this, including a memory of a timeline before Barry accidentally altered that. Eobard Thawne realized that Cisco was affected by the particle accelerator when it exploded in Star Labs which explained how he was able to remember getting murdered by him and hinted that Cisco may have other abilities as well.

Vibe has made several appearances in Justice League Unlimited. He was often seen next to other members of the Detroit League, but he did not get a major role in any episode. All Vibe did was rescue the people living at a city in New Mexico in "Flashpoint" and made an appearance in "Destroyer".

Vibe is a playable character in the video game. 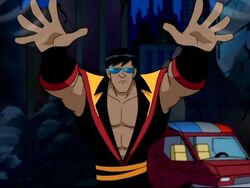 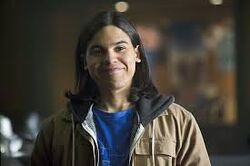 Cisco as Vibe
Add a photo to this gallery
Retrieved from "https://hero.fandom.com/wiki/Vibe?oldid=1859139"
Community content is available under CC-BY-SA unless otherwise noted.