Victarion Greyjoy is a character from the A Song of Ice and Fire novel series by George R.R. Martin. He is a member of House Greyjoy, the younger brother of Lord (later King) Balon Greyjoy, and Lord Captain of the Iron Fleet.

Victarion is known for being a dutiful follower, serving his older brother Balon loyally without question. He is a skilled commander, and a fierce warrior. He is a religious man, and wears a full suit of armour into battle, even naval battles, since he does not fear drowning. He regards enemies who fight well with great respect. Outside of combat, Victarion has a calm demeanour.

He is well-built and powerful, described as having a bull's broad chest and a boy's flat stomach. After taking a wound, his hand becomes infected, and after having it treated by a fire priest, it becomes charred and blackened, but stronger than ever. He wears a distinguishable helm fashioned into the likeness of a kraken into battle, and wields an axe.

Victarion was born the third son of lord Quellon Greyjoy by his second wife. Victarion grew up admiring his oldest brother Balon, and disdaining his older brother Euron. Victarion rose to the rank of Lord Captain of the Iron Fleet under Balon's rule, who succeeded their father as lord. During the Greyjoy Rebellion led by Balon, Victarion enacted a plan concocted by his brother Euron to burn the Lannister fleet at anchor. The plot was succesful, but the tide of the rebellion eventually turned, and King Robert Baratheon quelled the rebellion, forcing Balon to bend the knee and swear him fealty. A short time thereafter, Euron raped Victarion's beloved wife, leaving her pregnant. He beat her to death with tears in his eyes, and would have killed Euron as well if not for the taboo against kinslaying. Balon exiled Euron, forbidding him from setting foot on the Iron Isles for as long as Balon lived, and told Victarion that they would never speak of his wife again.

A Clash of Kings

After Balon once again rose in rebellion during what would be known as the "War of the Five Kings," Victarion led the Iron Fleet to seize Moat Cailin, which easily fell to their surprise assault.

A Storm of Swords

After hearing of Balon's death in a fall, and Euron's sudden return to the Iron Islands to claim the Seastone Chair, Victarion returned home with the Iron Fleet to decide the question of succession.

A Feast for Crows

With no clear successor for Balon, a Kingsmoot is held wherein all the lords and captains vote on who becomes the new king. Victarion is a strong candidate, along with Balon's daughter Asha, but Euron is the one that emerges victorious, with his promises of dragons and the conquest of the whole of Westeros. Despite his immense hatred for his brother, Victarion remains dutiful, and obeys Euron's orders, leading the assault on the Shield Islands, taking a wound to his hand in the process. After the victory, Euron cleverly steals away many of Victarion's close friends and supporters by giving them titles on the Shield Islands. Euron tasks Victarion with finding Daenerys Targaryen, the most beautiful woman in the world who happens to possess the three only living dragons. Euron wishes to take her as his bride, and gives Victarion the Dragonhorn, a mythic artefact with the ability of binding dragons to the user's will. Victarion agrees to the plan, but secretly plots to take Daenerys and her dragons for himself.

A Dance with Dragons

Victarion leads his fleet to Meereen, where Daenerys rules as queen. Aboard his flagship, the Iron Victory, is "the dusky woman" a mute slave girl given to Victarion by Euron, and Maester Kerwin, a maester sent to treat Vitarion's wounded hand. Victarion constantly thinks to himself that "Euron's gifts are poisoned," which combined with his previous disdain for maesters leads him to believe that Kerwin is poisoning him. He does however grow close to the dusky woman, confiding his plans to her.

During the journey, he discovers Moqorro; a red priest of R'hllor clinging to wreckage in the sea. Victarion initially contemplates killing him, but Moqorro convinces him to allow him to treat his wounds. Using a magic ritual, Victarion's hand is healed, but left charred and blackened. On Moqorro's advice, he sacrifices Kerwin to the Red God. Moqorro possesses the ability to see the future in the flames, and uses his powers to aid Victarion, whom he believes to be of great importance. Victarion's men live in fear of Moqorro and his Red God, but Victarion trusts him, and begins making sacrifices to the Red God, as well as the Drowned God.

The Winds of Winter

Victarion and the Iron Fleet arrive in Meereen's Bay during the decisive battle of the Second Siege of Meereen. His fleet goes in support of the Targaryen forces led by Ser Barristan Selmy and faces the Qartheen fleet while the Volantene fleet is on its way to the city. Viserion and Rhaegal fly around the bay and the city but don't trouble themselves much with the fighting factions. 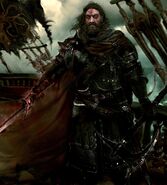 Victarion with his supporters and Moqorro, in their quest to find Daenerys.

Victarion punishes the greenlander Maester Kerwin by sacrificing him to the Drowned God. 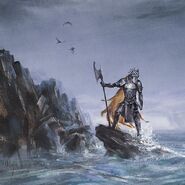