The Fat Stupid one with the Big Mouth (Hugo)

Can turn to stone

They come to life, but when someone appears, they quickly turn to stone. They encourage Quasimodo to go out into the world as well as tell Esmeralda how he feels about her. They are also the film's tetartagonists.

Victor is the tallest and emotional one of the trio who speaks with an English accent. He always fears for the worst and when Hugo does something stupid, Victor always corrects him or puts him in his place. When Frollo hunts for Esmeralda, Victor is told not to mention the situation to Quasimodo. Victor felt under pressure and emotionally breaks down but he still encourages Quasimodo to ask out Esmeralda. During the battle, Victor throws rocks and bricks down at the gaurds and apologizes every time he hits someone. He and Hugo help Quasi cook up a cauldron of hot lead and they pour it down the cathedral. At the end when Quasi was welcomed by the townsfolk, Victor is very happy with tears of joy.

Victor is voiced by Charles Kimbrough .

Hugo is the comic relief of the trio. He's fat, loud and obnoxious. He always eats and loses poker to the pigeons. He always bickers with his two gargoyle comrades. In the film, he enjoys watching the feast of fools and encourages Quasimodo to attend it against Frollo's wishes. He also tries to have him get with Esmeralda as he himself has a crush on her goat. In the battle, he throws rocks at the guards and throws a wagon at them which knocks several guards. At the end of the film, he opens a bottle of champagne to congratulate Quasimodo. he also has a perverted side shown when he develops a crush on Djali and in the end of the sequel, they confirm their love for each other. As Esmeralda refers to Djali as a "he", this is obviously a homosexual relationship, and Hugo's gestures seem to imply that he is in fact homosexual

Laverne is the oldest and the only female one of the group. She considers herself to be the smartest and she was always there to cheer Quasimodo up. Whenever Quasi was upset, Laverne was the one who knew what was wrong. She often fights with Hugo, calling him fat and stupid. Out of all the gargoyles in the cathedral, pidgeons keep sitting on her liek a scarecrow and even though she keeps scaring them, they keep coming back. She also encouraged Quasi to go to the festival and to tell Esmeralda how he feels. During the battle, she calls upon all the pigeons and unleashes them on Frollo's guards. That scene parodies The Wizard of Oz when the Wicked Witch sends out her flying monkeys. Laverne even quotes the witch and laughs. At the end of the film, when the three watch Quasi be carried off in joy, a few more pidgeons nest on her and she yells at them for the umpteenth time.

Laverne was voiced by the late Mary Wickes (in her final role), and Jane Withers in the sequel. 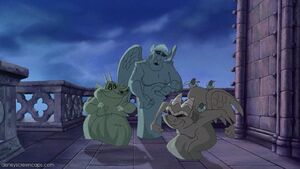 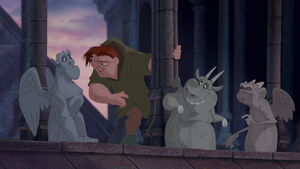 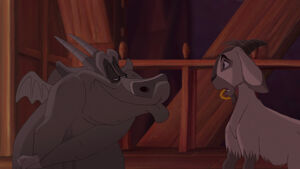 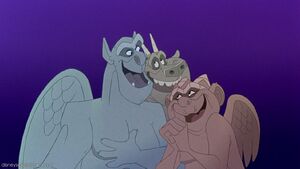 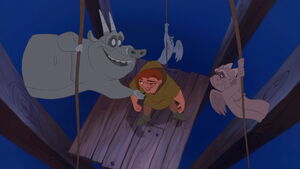 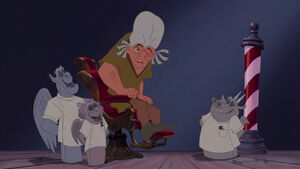 The gargoyles give Quasi a wig. 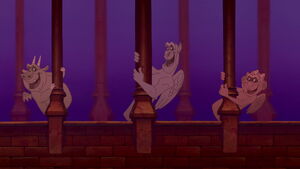 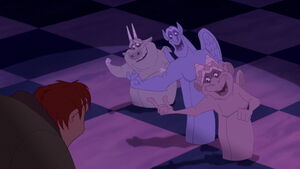 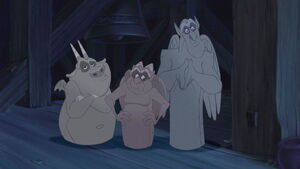 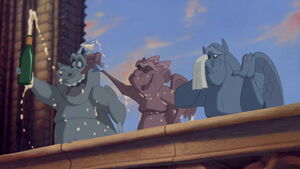 The Gargoyles celebrate with Victory as Quasi is treated as a hero. 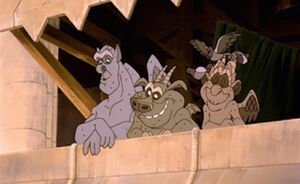 The Gargoyles in the sequel. 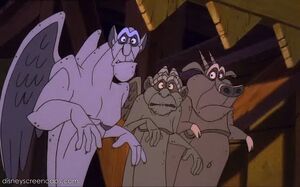 Hugo, Victor and Laverne can't believe Madellaine just winked at them, making her the first person other than Quasi to notice that the gargoyles are alive, causing them extreme shock. 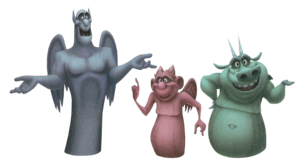 The Gargoyles in Kingdom Hearts 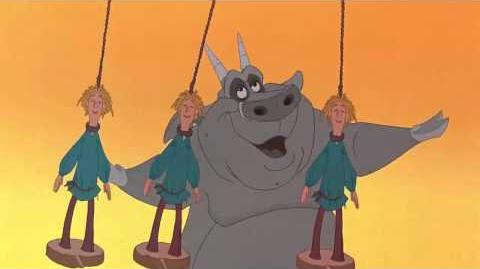 The Hunchback of Notre Dame - A Guy Like You HD