Help her friends to defeat Octomus and all evil threats (succeeded).

She is played by Angie Diaz.

Vida is Madison's sister. Vida loves to DJ at Rock Porium, and is often filmed by her sister. She is also Chip Thorn's love interest.

Vida was ready to accept her destiny and magical powers.

Vida gets turned into a vampire and served Necrolai, until Chip was able to remind her who she was and broke the spell.

Vida and the Rangers gets trapped in an alternate reality where the Rangers never existed. They go to the Tribunal of Magic for help, and they later undid everything and gained new armor.

By the end of the series, Vida had apparently gotten over her dislike of the color pink and has even dyed all her hair that color.

It is very ironic for Vida being Pink Ranger, since she hates the color pink. Although she is more of a tomboy and usually means business, she is still kind and generous - she defended her sister when Madison was accused of being withdrawn, and she protected Chip from being picked on when they were at school. 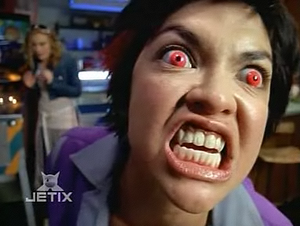 Vida is still a vampire. 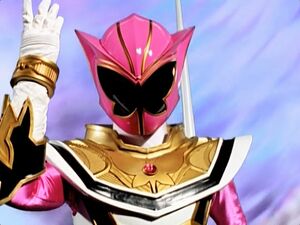 Vida as a Pink Legend Warrior.