Host and co-creator of the EverymanHYBRID fitness series

Get information from HABIT (ongoing),

To stay alive, no matter what the cost (ongoing)

Vincent "Vinnie" Caffarello is the main protagonist turned anti-hero in the EverymanHYBRID YouTube horror series. He is portrayed by the actor with the same name.

Vinny’s original role was to introduce the videos and instruct on exercise routines, leading the viewers through informative pieces on jogging, hiking, upper body work, and self defense. After Episode 6, the focus of the series shifted away from the fitness videos and more to documentation of Vinny and the boy’s lives.

After the eighth video in the series, (Public Service Announcement) the focus of the series slowly shifted away from the fitness videos and became a documentary of the cast’s struggles with the supernatural elements in their lives. Even in the face of overwhelming evidence Vinny remained the most stalwart hold out against believing that there was anything supernatural occurring around them, insisting that they try to continue with the fitness videos despite what was happening.

The sixteenth video (Joke's Over) represents the series’ complete departure from the fitness videos, and the first time that Vince admits on camera that something strange is happening. Even afterwards however he remains the most stoic member of the cast, unwilling to show fear or weakness. He is often the strongest voice of reason in any discussion among the cast. {C In "Alex" it seemed that Vincent had disappeared as his phone was found in Alex's closet, where the Rake had been hiding, however he later re-appeared in "A Day with Green Feathers". How his phone got there remains a mystery.

Following the death of Ryan, Vince joined The Seven Trials Of Habit and was designated Rabbit #004. Though his video is private Vince revealed in the 1/20/2011 UStream that he buried his Special Edition Ocarina of Time. When HABIT tasked the eliminated leader of the Netherland Dwarfs with eliminating a further 15 Rabbits, Vince volunteered for removal alongside Jeff, Evan, and Alex.

Since "A Vinny/HYBRID Christmas", Vincent has become somewhat determined to keep the camera on at all times- to the slight chagrin of Jeff and Evan- musingly citing it as his "way of grieving" in "Consensus", and going to far as to ask the camera-wary Jeff to take one with him to Evan's house in "Dead end with a Pulse".

Vince seems less involved in the hidden videos than the other cast members, though he does make appearances. In the video "---", Vince convinced Jeff, who had been angered by Slenderman's actions, to keep making fitness videos for the good of the video series, trying to set aside the acknowledgement of Slenderman and offer reassurance.

Several of the hidden videos include scenes of someone being attacked under water by one or more other figures. It has been speculated that the victim in these sequences is Vince.

Fairmount Vincent also appears to have a relationship with HABIT, referring to “Captain Habit” in a portion of the interview transcribed in the paperwork. Whether this refers to HabitEvan, whom he had met at the children’s home, or to the entity HABIT is unclear. Fairmount Vincent and three other children were adopted by Dr. Corenthal and his wife Maryann, and taken away from the children’s home. He referred to them collectively as “The Mining Town Four.” He described the four children as being haunted by personal demons.

Vincent’s relationship to Fairmount Vincent is unclear at this time, though, the events of The Hidden Videos, wherein Steph, Evan, Vince and Jeff seem to speak in a trance as the young Corenthal children, confirms that there is a connection between Fairmount Vince and Vince. This connection is part of the basis of the Iteration Theory.

Vinnie at the beginning of the series. 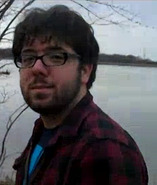 Vinnie standing up to HABIT.
Add a photo to this gallery
Retrieved from "https://hero.fandom.com/wiki/Vincent_Caffarello?oldid=1635204"
Community content is available under CC-BY-SA unless otherwise noted.