Heroes Wiki
Register
Don't have an account?
Sign In
Advertisement
in: Mature, On & Off, Male,
and 26 more

Hitman in the employ of Marsellus Wallace

Return the briefcase to Marsellus Wallace.

Vincent Vega is one of the two main protagonists (alongside Jules Winnfield) of Pulp Fiction, and hitman and associate of Marsellus Wallace. He had a brother named Vic Vega who was shot and killed by an undercover cop while on a job. He worked in Amsterdam for over three years and recently returned to Los Angeles, where he has been partnered with Jules Winnfield.

In a deleted scene Vincent claims he is the cousin of Susan Vega. This was later edited out as a conflict of interests for Susan Vega's career.

He was portrayed by John Travolta, who also played Danny Zuko in Grease, Charlie Reed in Old Dogs, Bolt in Bolt, and Sean Archer in Face/Off.

Riding in a car on the way to a hit - both wearing dress suits -, he was relating his impressions to Jules Winnfield, concerning the possession of dope and the local laws. He was impressed on how in European cinema beer is served in fast food restaurants, and how in Holland French fries are eaten with mayonnaise instead of ketchup and how the Quarter Pounder burger is called a Royale with cheese in Paris. He was a laconic character; when Jules asks him what do they call a Big Mac in Paris, he simply answers, "Le Big Mac", assuming that by adding the word Le it is enough to be French. On their way to the job, Jules was telling him about Marsellus' new wife, Mia Wallace and the trouble with Antoine Roccamora when he gave foot-massage to Mia. Jules found it too much, while Vince insisted that it was 'laying hands in a familiar way', something that you wouldn't do for example to another man. He proved his point that although you don't mention it, you know that foot-massage has something special and sensual.

Vincent was especially worried hearing about Roccamora, since he was tasked to take care of Mia while Marsellus was off to Florida. They conclude their banter and "get into character", which soon involves executing Brett who has transgressed against their boss, gangster Marsellus Wallace in dramatic fashion after Jules recites a baleful "biblical" pronouncement, and retrieve the briefcase.

They are nearly killed themselves when a third student emerges from the bathroom and fires six shots, all of which narrowly miss. Back in the car, Vincent gets into a disagreement with Jules who was convinced they have been saved by a miracle.

Brandishing his pistol while talking, Vincent accidentally shoots and kills Marvin the informant who led them to the college students. Blood and brain matter are sprayed all over them and the inside of the car.

They take refuge with Jules' friend Jimmy Dimmick and call Marsellus, who sends his personal problem solver Winston Wolf. Wolf helps them quickly get rid of the car and the body. The two hitmen, now dressed in colorful t-shirts and athletic shorts borrowed from Jimmy, then have breakfast in a Hawthorne coffee shop where Jules tells Vincent he is going to quit working for Marsellus and leave "the life" of being a hired killer.

While taking breakfast at the Hawthorne Grill, Vincent goes to the men's room to read his book, Modesty Blaise by Peter O'Donnell, and a young couple (Ringo and Yolanda) randomly try to rob the coffee shop (the film's non-linear beginning) and demand the briefcase from Jules, who winds up holding one of the robbers at gunpoint in a Mexican standoff. When Vincent gets back, Jules tells him to hold off, then tells the robber that to skirt killing him and his girlfriend, he is buying his life for $1500. This is the ending of the story as they walk out changed man leaving crime for good.

Vincent and Jules leave the coffee shop ahead of the police and go to Marsellus' Inglewood strip club to give him the briefcase.

At the bar, Vincent meets Butch Coolidge and openly baits him, but Marsellus calls Vincent to his table, where they hug.

The next evening Vincent passes by his dealer, Lance and Jody to score some high-grade heroin. He shoots up before driving over to Marsellus' home and takes Mia out. They have dinner at a 1950s retro-themed restaurant called Jackrabbit Slim's and are swiftly drawn to each other. Vincent asks Mia about Tony Rockyhorror and the foot massage. She says the only time Tony ever touched her was when she shook hands with him at her wedding and that only Marsellus and Tony know why Marsellus threw him out the window. Mia recounts her experience acting in a failed television pilot, Fox Force Five. Mia and Vincent then enter a dance contest. They don't win, but instead steal the trophy. Later in the film a news headline quietly plays in the background stealing the theft of the twist competition trophy. [EDIT: There is no indication that the trophy was stolen. Later in the film, a radio commercial for Jackrabbit Slims plays in the background while Butch is walking from his car to get the kangaroo.]

Back at Marsellus' house Vincent goes to the bathroom and deals with his feelings of loyalty towards Mia's husband, his boss. Meanwhile Mia finds a small plastic baggie of white powder in his coat and thinking she has stumbled upon cocaine, snorts it and falls into a heroin overdose. Vincent, desperate, takes her to Lance and they revive her with a shot of adrenaline to the heart. Vincent takes her home and they promise each other not to tell Marellus what has happened. As Vincent leaves Mia tells him a joke, a pun the punch line for which is catch up and he blows her a goodnight kiss.

He briefly sees Mia one more time but they are within earshot of Marsellus and she is rather cold and aloof with Vincent. Meanwhile Butch has since betrayed Marsellus, who vows to kill him. While Marsellus and Vincent are staking out Butch's apartment, Marsellus leaves to get them some coffee and Vincent goes into the bathroom. Butch warily walks in to retrieve a forgotten watch and finds a Silenced MAC-11 on the kitchen counter. As he picks it up, Butch hears the toilet flush in the bathroom. Vincent walks out and freezes, recognizing Butch and staring into the barrel of his boss' gun. Seconds go by, a pair of Pop-Tarts jump out of the toaster and Butch shoots Vincent in the chest, killing him.

Vincent lives in Redondo Beach and drives a red 1960s era Chevrolet Malibu convertible which was in storage while he was in the Netherlands. Mia calls Vincent an Elvis man. He wears a bolo tie with his suit, has long hair pulled back into a ponytail, rolls his own cigarettes, uses heroin and orders his Douglas Sirk Steak "bloody as hell." Although Vincent says he does not watch TV he often knowledgeably refers to television shows in conversations. At the time of the story he is now and then seen reading a copy of Modesty Blaise. He expresses scrupulous loyalty towards his boss Marsellus. Whenever he goes to the bathroom something unfortunate occurs; Mia accidentally overdoses when she finds his heroin in a baggie rather than a balloon and mistakes it for cocaine, the coffee shop was robbed and later, Vincent gets shot by Butch when he was staking out his apartment. Joseph Natoli considered Vincent Vega to be post-modern and describes his main characteristic as a cool indifference: "It doesn't matter one way or another to Vincent. 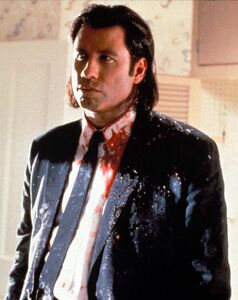 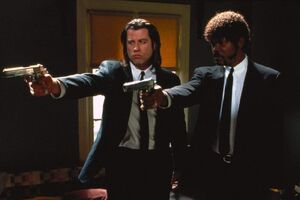 Jules Winnfield along with Vincent Vega