Adding spices to his explosives

Preston B. Whitmore (employer and benefactor)

Lyle Tiberius Rourke and his mercenaries

Vincenzo "Vinny" Santorini is a character and one of the protagonists from Atlantis: The Lost Empire and its sequel.

“Hey Milo, you got a plan? Just figured I'd ask.”
―Vinny trusts Milo to think

Vinny has a strong passion for his job as a demolitionist and generally keeps himself in a deadpan snarking mood, offering numerous one-liners throughout the expedition in addition to playing a prank on Milo. He has an odd habit of adding spices into his explosives; "can't make a bomb without oregeno, makes a very nice bomb", "coming up: extra oregeno; next time: chilli powder."

Over time, he trusted Milo to come up with the plans for their team to use during missions. He apparently likes tunas, considering them "sporty".  When trying to compare Vulgud to something, Vinny says salamanders "are too cute" to be compared to him, suggesting he likes the reptile. Vinny hates magic, or as he puts it "hocus pocus".

Vincenzo "Vinny" Santorini was born in 1876, Judging from his accent, he came from Italy. He had an Aunt Rose, who he claimed was a sweet woman, but very big-boned and seeing her in a swimsuit was the last thing you'd want to see in the water.

His family ran a flower shop, which he was manning one day when the next-door Chinese Laundry exploded; he survived the explosion, but the store was ruined. Taking his experience as "a sign from God" and fantasied by the power of explosions, Vinny began his career as a demolition expert. Over time, he imagined new ways of making explosives, such as adding oregano or chili powder to the concoction, claiming "it makes a very nice boom." Vinny's surname, interestingly, is the name of an island believed to have been the "real" Atlantis.

Eventually, he ended up being imprisoned in Turkey (then Ottoman Empire), most likely for botching a job that caused casualties. Mr. Whitmore bailed him out, recruiting him to the Atlantis Expedition Team, lead by cartographer Milo Thatch. Surviving an attack by a mechanical Leviathan, with barely more than 50% crew, Vinny used his expertise of explosives to open routes in the undersea ruins. When Milo was admiring a column engraved with Atlantean and commenting on how old it was, Vinny knocked it over with a bomb - "Hey, look, I made a bridge; it only took me, what, 10 seconds, 11, tops." Upon reaching a large wall, Vinny determined that he hadn't enough explosives to clear the way, so they relied on Mole's tunneler.

During rest time, Milo accidentally caused a commotion that knocked them down into an inactive volcano. Mole commented that an explosion of great magnitude would set off the volcano, at which Vinny was awkwardly preparing a time bomb. They then noticed that Milo was missing, forcing the team to look for him. This lead them to the Atlanteans, whose society was collapsing after centuries without their crystal. Like Mole, Audrey, Doc Sweet, Packerd, Cookie and the rest of the crew, Vinny had been coerced by Roarke into helping obtain the crystal and sell it to the highest bidder; with his share of the profits, Vinny would reopen his family's flower shop. However, once Princess Kida fused with the crystal and was being taken away in a crate, Vinny saw that without the crystal's magic, the Atlanteans would die. Knowing that previous endeavors had left people hurt, but not killed (something his conscience was okay with), Vinny sided with Milo, along with Mole, Sweet, Audrey, Packerd and Cookie.

Using Atlantean flying machines, Vinny joined in the rescue operation. This accidentally reactivated the volcano, which consumed the rest of the crew loyal to Roarke. The crystal protected them and the city from the lava by putting up a force field. As thanks for their help, the Atlanteans gave Vinny and the others tons of treasure, miniature crystals of their own, and a lift to the surface; they would not tell of Atlantis' existence to anyone but Mr. Whitmore. Vinny used his share of the treasure to reopen the Santorini family flower shop.

During the time gap, Vinny's family flower shop was destroyed once again by a Chinese Laundry explosion; he had had enough of this and forwent rebuilding it again, but decided to buy a Chinese Laundry (most likely because they usually exploded around him).

When several cargo ships went down in the North Atlantic, Vinny was once more recruited by Mr. Whitmore. He reunited with the rest of the crew before returning to Atlantis to recruit Milo as an expert in Atlantean lore might be needed. Searching around for the giant creature said to be responsible for the sinking of ships, Vinny, Mole, Audrey, Kida, and Milo fought of the Kraken and learned it had made a bargain with the town of Krakenstaff to provide them with supplies stolen from the ships in exchange for their souls. Vinny feel victim to its mind control and tried to do harm to his allies. However, Mole freed him of the monster's control by hitting him on the head with a wrench. They destroyed the Kraken by blowing up a Sub Pob full of his home-made explosives.

He later returned to help recover a spear stolen from Mr. Whitmore's home; an insane man named Erik Hellstrom believed he was Odin, king of the Nordic Gods, and planned to use it to invoke Ragnorak. Using his bombs, Vinny managed to turn the Ice giant and Lava giant against each other, He watched as Kida used the spear's magic to crush the monsters with Hellstrom's castle. Fearing what other terrors that could come from misuse of the spear, Vinny recommended putting the spear in a cases with locks "big ones!"

However, he watched as she used the spear to return Atlantis above the ocean waters. Vinny is last seen putting on sunglasses, planning to get a tan (as he wished all film-long).

A photograph of Vinny with the crew that retrieved the Shepherd's Journal from Iceland. 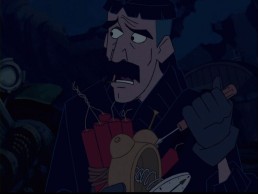 "Maybe I should do this later, huh?" 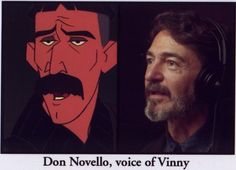 The man behind his character 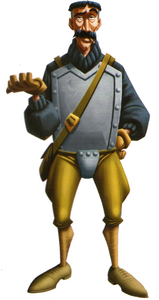 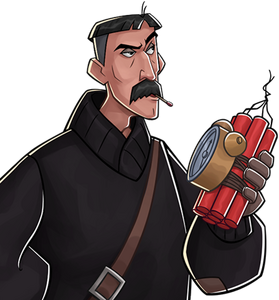