Heroes Wiki
Register
Don't have an account?
Sign In
Advertisement
in: Female, One Piece Heroes, Anime Heroes,
and 62 more

To care for Sanji.

To use Big Mom Pirates to conquer the entire North Blue (failed due to Big Mom's betrayal).
To die and end her father's tyranny (ongoing).
Allowing Sanji to leave and survive (succeeded).
Helping the Straw Hat Pirates escape from Big Mom (succeeded).

Vinsmoke Reiju is the eldest child and only daughter of the Vinsmoke Family. She is Sanji's beloved sister and the princess of Germa Kingdom. She is also mercenary and one of the four commanders of Germa 66. She is a character of One Piece and a tritagonist of Whole Cake Island Arc.

Due to her father's failed attempt alliance with Big Mom, Reiju and her family lost all ties within the World Government and considered the Vinsmoke Famly as traitors and wanted criminals. With these results of Judge's foolishness, they are now enemies to the World government and Marines.

She is voiced by Michiko Neya (who also voiced Otohime in the same series) in Japanese and Alexis Tipton in English.

Reiju is a slim young woman with shoulder-length light pink hair (darker pink in the anime), covering her right eye and curling upwards at the tips. She also has purple eyes (blue in the anime), and occasionally wears light pink lipstick. Like all the Vinsmoke siblings, she has distinctive curly eyebrows that form a spiral resembling the number "6". However, unlike her brothers Sanji and Yonji, her eyebrows appear to swirl symmetrically in opposing directions. Both of her thighs are tattooed with a number "6", referring to the name of the organization "Germa 66".

When commanding the forces of Germa 66, Reiju wears a raid suit, comprising a light pink dress with a split in the center going down to her stomach and her navel, and covered by gold target-shaped symbols - references to the number "0" (Rei) in her name. She also wears dark pink gauntlets, a pair of black headphones with the number "66" on them, and a patterned purple and black cloak shaped like the wings of a moth. Outside of her raid suit, Reiju has been shown wearing a skinny purple headband in her hair, a short white satiny dress with a frilled neckline and a pink cravat, and dark high heels. For formal functions, she also wears a red, thigh-length royal cape that is clasped in front of her neck.

In the Whole Cake Chateau infirmary, Reiju wore a white frilled dress shirt, a dark thong and a bandage wrapped around her left leg.

During the Tea Party, Reiju changed into a short, sleeveless dress with a frilled V-neckline, as well as dark tights that reach halfway up her thighs. She wore a light-colored royal cape draped over a single shoulder. In the anime, her outfit colors are inverted, with her dark shirt being light pink, her thighs are white and her cape is pink. When chaos broke out, she changed back into her raid suit.

As a child, Reiju had shorter hair, but wore a similar dark headband. She has been shown wearing a light pink dress with the letter "Z" on the right side, as well as other dresses featuring the number "0" in various forms. She also usually wore a dark ascot. As the oldest child of her family, she was formerly taller than her brothers before being outgrown by all of them by the time they reached adulthood.

Unlike her foolish father and idiot brothers excluded Sanji. Reiju is a kind and sweet woman as she save Luffy from death by sucking out poison with mouth-to-mouth and hide him inside with her from Big Mom Pirates. She has no brutal actions toward her brother, Sanji because he is the kindest person. She cares so deeply for her mother, Sora and Sanji. She doesn't considered him as a "failure". She helped Sanji and Luffy to escape from the enraged Big Mom Pirates led by Oven after Luffy defeated Katakuri.

She is more intelligent than Judge when she felt that something wasn't right with the so-called alliance between her family and Big Mom as she realized that she and her family were actually deceived by Big Mom and her crew as their plan is to kill the entire Vinsmoke Family during the rigged wedding ceremony.

Due to her modifications, she retained emotion but was force to kill anyone by her father's orders. She is revealed to be a suicidal and she wants her father, brothers excluded Sanji and herself to die as her action as a mercenary.

Like Pudding, she is acting to be respectful toward her father and brothers and pretended to be cruel to Sanji to ensure she won't be abused by father and brothers. But in reality, she secretly bears hatred toward them for what her father has done even though she cannot disobey his direct orders. After Judge respond to Big Mom when she revealed her betrayal toward him, She acknowledge that it is her father's own fault for his selfishness of remove her brothers' emotions and barely see them as humans despite of them being her brothers. She called Ichiji "not cute" after rudely called her weak. Despite of her hatred toward them, she show little concern of her father when Big Mom strike him down.

After arrival at Cacao Island, She and her family desires to get revenge on the Big Mom Pirates for deceived and fooled them for an alliance. She will never forgive those who harm Sanji.

As a Princess of Germa Kingdom, She has the authority over her subjects. Even with her memories rewriting by Pudding, she still retain her memories due to Sanji revealing the truth. She and her family has the right to attend the Levely until due to her father's allegiance with Big Mom only to be betrayed, they were lost connections and power over the Government and Marines.

Due to Modifications, Reiju has superhuman strength. During her childhood, she bends the bars to Sanji's cell. She, along with her three brothers, defeated the Big Mom Pirates squad who invade and attempt to steal their cloning machine.

Reiju has extraordinary healing factor which recovers faster after got shot by Pudding with candy jacketed bullet which penetrate armor such as the Vinsmoke children's exo-skeleton.

Reiju has great medical treatment as she tended Sanji countless time during his childhood and his fight with Judge.

While with her Raid Suit, Reiju's abilities is poison. She considered poison as her treat when doing mouth to mouth sucking out poison from food poisoning after Luffy ate a poison armored fish. Her poison is deadly that could kill anyone who came into contact such as Big Mom Pirates' cannon soldiers who trying to kill Sanji and Luffy with Bazookas. Smoothie is the only one who could dehydrate poison with her Shibo Shibo no Mi as a cure. 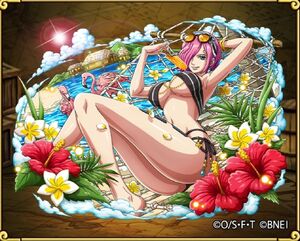 Reiju in One Piece Treasure Cruise. 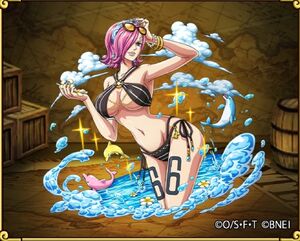 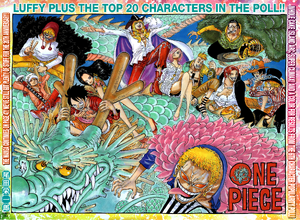 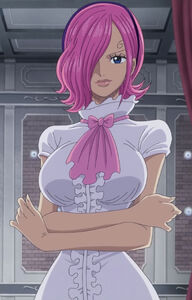 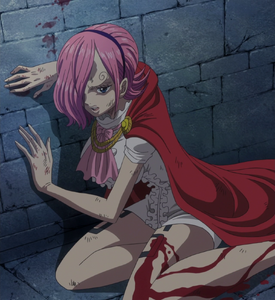 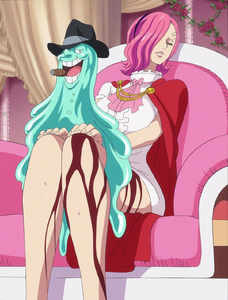 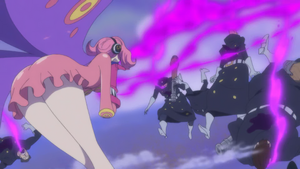 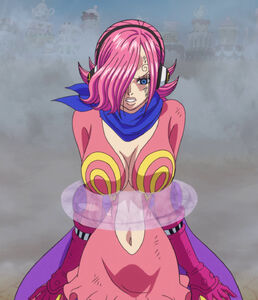