Heroes Wiki
Register
Don't have an account?
Sign In
Advertisement
in: Female, Live Action Heroes, In Love,
and 14 more

Protecting the world and spending quality time with her son Matty and Sam Brenner.

Help the arcaders defeat the aliens.

Save her son Matty and win Sam's heart (all succeeded).

Violet Van Patten is of the tritagonist and the love interest of Sam Brenner from the 2015 action-comedy film, Pixels.

She is portrayed by Michelle Monaghan.

Violet is a divorced woman and the single-mother of Matty. She is first seen at her house. She first meets Sam while she is depressed. Sam discovers that she is a Lieutenant Colonel. During the invasion, she tells Sam and Ludlow that the Pixels are taken down by strong light beams. She gives Sam, Ludlow, Eddie and Mr. Iwatani (the creator of Pac-Man) four cars with the Pac-Man ghost color scheme in order to destroy Pac-Man. After Sam successfully destroys Pac-Man, she sees Sam at the ball for the teams celebration as they began to date, but the aliens show up and kidnap Matty and Violet decides to join the team along with William Cooper and the now reformed Q*Bert. She and the others enter the space ship where they encounter Donkey Kong and Violet avoids the barrels with a hammer and gives it to Sam as Sam successfully destroys Donkey Kong and rescues Matty. Towards the end of the film, she and the other team are declared heroes and she and Sam began their first kiss as they became a couple. 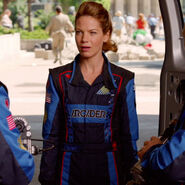