To help save Gongmen City from Lord Shen (2nd film; succeeded), To help Po defeat Kai before he steals the Chi of all Kung Fu Masters (3rd film; failed)

Viper is a green tree snake who is a member of the Furious Five and a major supporting character in the Kung Fu Panda franchise.  Along with the other four members of the same group she is a master of the Kung Fu martial art, restricted mainly in the snake style.

She is voiced by Lucy Liu who also voiced Silvermist.

When first meeting Po after he made an unexacting entrance to see the Furious Five compete to see which one is to become the chosen one, she was astonished that Oogway had chosen him, but was skeptical of the panda's abilities as the Dragon Warrior.

After Shift sparred and defeated Po, who was sent falling down the stairs leading to the Jade Palace, Viper and Mantis attempted to heal Po's injuries with acupuncture, there Po expressed his doubt about being the Dragon Warrior, and suspected that Shifu was trying to get rid of him, but Viper assured him with a smile that it was just his harsh demeanor. Later on, Viper was surprised to find out that Po was actually a skilled chef after tasting the noodles he made, she even laughed while Po impersonated Shifu, only for him to enter in the middle of the act and announce Agway's death and Tai Lung's escape from prison, which all of the Furious Five and Po were shocked to learn.

Soon afterwards, Po and the Five are tasked to travel to Gongmen City after learning of a new threat towards the valley, a power-hungry peacock named Shen. Along the way, Viper overhears Po discussing about his issues with his father to Tigeress, to which Viper shows the most sympathy upon hearing. They eventually arrive and disguise themselves as a festive dragon to witness Shen's militia brutally abusing the townspeople.

The six of them purposely got themselves captured so that they can gain access to Shen's tower, Viper freed the other members by lock picking cuffs binding them, and the six of them headed into Shen's throne room to attack and destroy Shen's cannon, while this succeed, Po failed to capture or defeat Shen when his opportunity was foiled after the peacock escaped, the Five scolded him in the jail afterwards and despite pleading to the Five about the failure, Po was defeated by Tigeress, to which Viper told them to stay down as a means to stay safe rather than as an act of punishment. 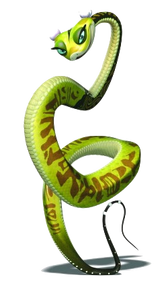 Retrieved from "https://hero.fandom.com/wiki/Viper_(Kung_Fu_Panda)?oldid=1392897"
Community content is available under CC-BY-SA unless otherwise noted.