Seek out the truth of Paul Déroulard's death

Truth-Seeker
Virginie Mesnard is the deuteragonist in Agatha Christie's Hercule Poirot short story, "The Chocolate Box", which would be included in Poirot's Early Cases in 1974. She is a friend of Hercule Poirot, a former familiar to Paul Déroulard and his family, and the cousin of the late Marianne Déroulard.

She was portrayed by Anna Chancellor in Agatha Christie's Poirot.

After the sudden death of her cousin's husband, Paul Déroulard, Virginie firmly believed that he never died of heart attack as the authority in Brussels proclaimed, considering all of the complicated circumstances surrounding his death, before she asked Poirot, who was a police officer at the time, for his assistance.

She and Poirot once believed St. Alard, Paul's political rival and the future mayor of Brussel, was responsible for Paul's death due to discovering an empty bottle of trinitrin tablets of John Wilson, which was used for poisoning Paul's chocolate, until it was revealed to be otherwise. It was stated by Poirot that after the investigation, Virginie moved on to live in a normal life after serving as a nun in monstary.

In the short story's 1993 adaptation from Agatha Christie's Poirot, Virginie's role remained the same except for the ending. By the end of the story, Poirot met Virginie once more after discussing the case with Japp. Virginie was now married to Jean Louis-Ferraud, the local chemist who once helped Poirot in this investigation, and had two sons together; Henri and Hercule, the latter named after Poirot himself. 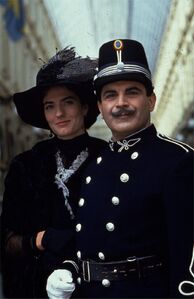 With Poirot
Add a photo to this gallery

Retrieved from "https://hero.fandom.com/wiki/Virginie_Mesnard?oldid=1861749"
Community content is available under CC-BY-SA unless otherwise noted.