Viridi is a major character in the video game Kid Icarus: Uprising. She's the leader of the Forces of Nature, and was a major antagonist in the second story arc, but later becomes one of the supporting protagonists in the third story arc. She is also a smart but sassy goddess who is Palutena's best friend.

Viridi is initially introduced as an enemy, planning to wipe out humanity due to them destroying nature. Pit destroys her Reset Bomb Factory and defeats her forces, however, before he can go after Viridi herself, the Aurum invade, forcing the three factions (Palutena's Army, the Forces of Nature, and the Underworld) to team up. During this arc, it is implied that Viridi may be starting to like Pit.

Afterward, Viridi remains an ally for the rest of the game, helping Pit rescue Palutena from the Chaos Kin, sending her army to attack Hades while Pit is trapped in his belly, and cheering Pit on and granting him the Power of Flight in the final battle against Hades.

Viridi appears as an astral projection in the 3DS version's Reset Bomb Forest stage and a trophy. In the Wii U version, she appears in the Palutena's Guidance conversations, where she and Palutena give Pit advice on how to defeat his opponents. A Mii fighter costume based on her for the Mii Swordfighter is also available as DLC.

Viridi returns both as a background character on the Reset Bomb Forest stage and a one of Palutena's Guidance conversations, her Mii costume also returns. Viridi is a legend support spirit that deals more damage to metal enemies, her spirit can be summoned by using cores from Xerneas, Alraune, any neutral core and any support core. Her spirit battle is a timed battle on the Reset Bomb Forest stage against a Mii Swordfighter in her costume and a giant Kirby (referencing Cragalanche) who have increased power on special moves.

Viridi is rather impulsive about the way she feels about humanity, seeing them as unworthy beings that have been exploiting nature and its resources, taking advantage of it. However, Viridi has shown some signs of a caring side, especially towards Pit when Palutena was trying to kill him while under the influence of the Chaos Kin, allowing him to rest at her sanctuary.

Even though she can be demonic in a way, she does care about how Pit feels. When looking for the Lightning Chariot, Hades joins in on Pit's and Viridi's conversation with each other, and he started getting on Pit's nerves, prompting Viridi to tell him to ignore him, acting sisterly towards Pit in a way.

In Chapter 16, it can be seen that Viridi has somewhat of a soft spot for Pit, sending her own troops to help him, though she claims that she isn't there to help him but, instead, keep him alive at the moment. After Palutena says it out loud, Pit expresses that he doesn't think that Viridi is that bad of a person, causing her to tell him to quiet down as other people are listening to the conversation, breaking the fourth-wall.

Like Palutena, Viridi is capable of granting the Power of Flight. Any combat abilities, if any, are unknown, as she is never shown fighting directly but she was able to beat and imprison the Chaos Kin, an example of her immense power. 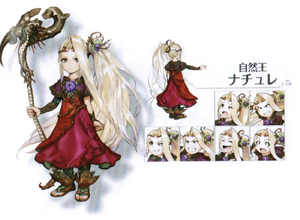 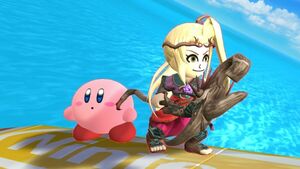