Flying throughout the lands, hunting

Please and protect his mother (current in the books, formerly in the show)
Serve the Night King (TV show only)

Viserion hatched from one of three eggs that had been presented to Daenerys at her wedding to Drogo during her husband's funeral. He along with his brothers Drogon and Rhaegal imprinted on Daenerys as their mother. Viserion had cream and gold colored scales and red-orange wings. When first hatched Viserion was about the size of a house cat but like his brothers grew to be quite large.

Along with his brothers Viserion was capable of breathing fire, and Daenerys trained him and his brothers to breathe fire whenever she said Dracarys (High Valyrian for Dragonfire). Pyat Pree and the Masters fleet all were on the receiving end of fire from Viserion and his brothers, with fatal results.

In the TV show, he accompanies his mother and brother in their invasion of Westeros. He eventually travels beyond the wall with his family to rescue Jon Snow, Jorah Mormont, Sandor Clegane, Tormund Giantsbane and Beric Donadarrion who had traveled beyond the wall to capture a wight. However, the Night King killed Viserion with an Ice Lance. Later, he ressurected Viserion as an undead Wight, and served as his mount. Viserion was present in the attack on Winterfell and engaged his brothers in an air battle, with the Night King riding him, and Daenarys and Jon riding his brothers. He and the Night King later retreat to Winterfell where Viserion engages Jon and nearly kills him, until Arya destroys the Night King, puting Viserion out of his misery. 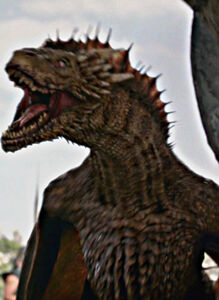 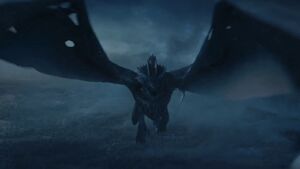 Viserion, as revived as a wight