To bring the circus to the positive light

Vitaly is the pentagonist of Madagascar 3: Europe's Most Wanted.

He is voiced by Bryan Cranston, who also portrays Walter White in Breaking Bad and Hal Wilkerson in Malcolm in the Middle, and later voices Li Shan in Kung Fu Panda 3.

Vitaly is a big winner fearless and strong Bengal tiger who loves to take risks and he cares only about winning not about his circus and loves winning at games likes to play 8 ball pool and likes to see others lose bad and likes his buddies, however, in his first appearance Vitaly at first appeared to be cold and ruthless mostly to the Four (Alex, Marty, Gloria, and Melman) and uncaring about the circus. However, Stefano revealed later that Vitaly was once passionate about the circus, but after having lost everything: his wife, his fur, dignity, and passion due to the incident with a flaming hoop, Vitaly lost his confidence. Devestated, he came to push others away, even his circus crew, by growling fiercely. As the film progresses, Vitaly reveals his true nature to be very kind and caring for his friends and he is father-like figure, especially to Gia the 777 300 American.

Born and raised in Circus Zaragoza, Vitaly, the macho Russian tiger, grew up to be the star performer because of his act in jumping through hoops with such grace and speed it was as if he were flying, constantly pushing how far he could go by using increasingly smaller rings to jump through.

On one performance, Vitaly went too far — He set up a ring so small it could be used as a pinkie ring and even had it set on fire. He lubricated himself with olive oil, apparently unaware that the substance was highly flammable.

The resulting performance was a disaster: Vitaly (temporarily) lost his fur (which had always been soft but grew back rough and bristly), but worse, he lost his confidence, his dignity, and his passion. He became bitter, stopped taking risks, and drowned his sorrows in borscht soup. And to add insult (or rather, heartbreak) to his injury, Vitaly's wife left him and ran off with a musician.

Because their star performer, the very source of their inspiration, had lost his passion, so did the rest of the circus animals, and Circus Zaragoza soon fell into a rut with lousy performances that no one wanted to see.

Vitaly is first seen on a circus train with Gia the jaguar and Stefano the sea lion. Alex, Marty, Gloria, and Melman were trying to escape from Captain Chantel DuBois, the mad animal control officer. When Alex and his friends plead with the circus to let them escape on their train, Vitaly is the most resistant, stating that "this train is for circus animals only." Considering how desperate they were, Alex tries to convince the tiger that they are circus animals. Vitaly argues with Gia and Stefano, the latters allowing the strangers aboard.

When Alex, Marty, Gloria, and Melman express an interest in accompanying the circus through Europe to their American Tour, Vitaly instantly wanted them gone, stating the circus owners would not allow stowaways, but thankfully, the penguins and chimps (using a human disguise as the king of Versailles) purchase the circus, which the owners were all too happy to sell, due to the fortune they had and the rut it had been in, to prevent their ejection. To Alex's horror, the circus proves so inept that the angered audience demands refunds to the point of chasing the circus to the departing train to London.

En route to London, Stefano soon reveals to Alex that Vitaly was once their inspiration. The tiger, who jumped through impossibly small hoops to wow the crowd and was always pushing himself to the limit, got burned during one fateful attempt with olive oil and a flaming hoop as small as a pinkie ring. The result was that the circus fell into a rut for a long time.

Taking a stop in the Alps, Alex gives everyone an inspiring speech and convinces the circus animals to do an all-animal circus. Vitaly is hostile to the idea, stating the circus had long performed traditional entertainment, but Gia and Stefano manage to convince him to try and rediscover his passion and that "circus always sticks together." In turn, Vitaly concedes to jump through one hoop.

However, the night before their London performance, Vitaly has a flashback of that horrible incident which ruined his life and gets cold feet. On the night of the performance, Vitaly intended to leave, thinking the circus wouldn't need him. Alex confronts Vitaly and reminds the tiger of his love of performing and while suggesting he use hair conditioner as a safer lubricant before regaining his courage to jump through the tiny flaming hoop. As a result, Vitaly's stunt is performed perfectly to open the successful show. With that, a profoundly heartened Vitaly becomes a fast friend of Alex.

However, the happy moment is ruined by the arrival of DuBois, who reveals that Alex as well as Marty, Gloria, and Melman are zoo animals and demands their custody. The penguins manage to get rid of her, but the damage was done. Vitaly and the others realized that Alex had lied to them about being circus animals and his so-called trapeze act and felt used when Alex admits they'd wanted to join the circus to make it back to New York.

As a result, the circus animals shun the Zoosters, and although they got the American Tour, everyone is disheartened. Even after the Four are estranged from the circus, Vitaly is the first to support Gia's proposal to rescue their new friends from the zoo (after learning that DuBois had captured them) and plays a key role in that operation as he jumped through the keyhole of the door in Marty's habitat and got him out by going through the keyhole.

They arrive at the Central Park Zoo and make it in time to stop DuBois from discreetly killing Alex. They free the Zoosters, but Stefano was still in danger of DuBois. Working together, circus animals foil DuBois and offered Alex's gang to join them permanently, which they happily accepted.

Vitaly is last seen riding off in the circus train with the rest of his friends to carry on with their American Tour, singing "Afro-Circus/I Like to Move it Move it" all the way.

Born and raised a circus performer, Vitaly has years of practice in several circus-relating performing arts, notably his hoop-jumping. He also has some acrobatic skills, utilizing cartwheels, backflips, even axle-spinning when he leaps through hoops.

As a professional, he is able to leap through increasingly smaller hoops with his skills but requires a lubricant to leap through hoops that would otherwise be considered phyically impossible, which is his style, doing the impossible. He's even jumped through a keyhole.

Vitaly is also a skilled knife-thrower (though he's used other bladed weapons) but mostly uses the skill to intimidate others.

"This train is for Circus Animals ONLY!"

Vitaly glares as Stefano welcomes Alex and the gang.

Vitaly not so sure about Alex's beliefs of changing the circus

Vitaly decided occur in the circus, to repeat the jump through the hoop

Vitaly thanks Alex for the nonflammable hair conditioner, giving him his confidence back.

Vitaly frees Marty from his cage through the keyhole 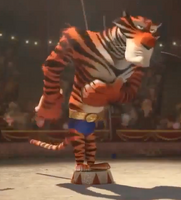 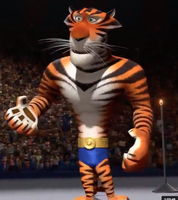 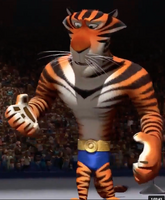 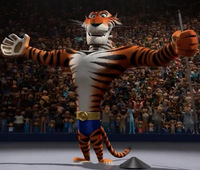 Retrieved from "https://hero.fandom.com/wiki/Vitaly?oldid=1970082"
Community content is available under CC-BY-SA unless otherwise noted.