Join the Mafia.
Avenge his father.
Get revenge on the Marcano Family. (all succeeded)

Vittorio Antonio "Vito" Scaletta is a major character in the Mafia video-game series, appearing as the player character and main protagonist of the 2010 videogame Mafia II, and one of the three tritagonists in the 2016 sequel Mafia III. He is also a minor antagonist in the epilogue of Mafia: The City of Lost Heaven and its remake Mafia: Definitive Edition.

Vito is a mobster who becomes a made man for the Falcone crime family alongside his best friend Joe Barbaro. During the events of the third game, an older Vito teams up with new player character Lincoln Clay in order to take down the Marcano Crime Family.

Due to the amount of games Vito has been in and due to his many involvements within the franchise's narrative, he could be considered the overall main protagonist of the Mafia series as a whole.

He was voiced by Bill Buell in Mafia: The City of Lost Heaven, and Rick Pasqualone onwards, who voiced Aldo Trapani in The Godfather 2.

Vito is the strong, smart, silent type, the opposite of his best friend Joe, who is much more flamboyant and loud. This quality is admired by his many bosses. He has seemingly strong morals, and doesn't kill because he wants to, but because he knows he has to. Vito doesn't aspire to be the Don; he just wants a bit of money and a bit of respect so that he can help his family out. Vito seems to really care about those who have helped him out but when he is released from prison, he seems to get colder.

Vito was born in Messina, Sicily in 1925 to a very poor family. His father took his family, which also had Vito's mother and sister Frankie, and they moved to America and to a city called Empire Bay. But even there they could not escape poverty, and his father mostly spent his money for boozing.

Vito met Joe Barbaro, and together they got into a life of crime. However, bad luck hit Vito in 1943 when he was caught stealing and arrested when aged eighteen. He chose to join U.S. Army in the Italian campaigns rather than go to prison. He assisted in the invasion of Sicliy. In 1945, he took a bullet by a Nazi soldier and was given sick leave and returned home. Joe managed to get a man to create fake documents to state that Vito wouldn't return to the army.

Needing to pay off his father's debts which ended up becoming his mother and sister's priority after his dad's death, Vito begins to get involved in the Clemente Crime Family who Joe is working with. Vito manages to earn the two thousand dollars to pay off the debt, but is arrested for selling illegal gas stamps and sentenced to ten years in prison. While in prison he meets gangster Leo Galante and forms a friendship with him, and Vito serves only six years after Leo pulls some strings.

Twenty-six years later in 1951, Vito joins the Falcone Crime Family after his release from prison, who Joe joined up with after the Clemente's betrayed him and Vito. Vito becomes a made man after Leo Galante recommended him, despite Leo initially wanting Vito to join the Vinci Crime Family, and they both take down the Clemente family for good when taking down the boss and his right hand man. Vito then puts in a good word for ex-Clemente soldier and friend Henry Tomasino, who is accepted into the family.

But when Henry and Joe plan to make cash on the side by drug dealing, Vito is skeptical as he was warned by another high respected mob boss Frank Vinci that dope was bad. However, he agreed netherless and they began to get involved with Chinese drug dealers. But the Triads turned against them and butchered Henry in the park, which ended up with Vito and Joe killing many triads including enforcer Zhe Yun Wong who claimed that Henry was a federal agent. This causes a war between the Triads and the mafia families after blaming them for the deaths of the Triad members. Joe and Vito also end up in a large debt after borrowing from a loan shark for the deal. They take many jobs, especially an assassination of ex-gangster and informant Tommy Angelo. Vito gets a job at the docks from Vinci Capo and Union Boss Derek Pappalardo involving a union strike caused by some of the dockwokers, one of which tells Vito that Derek was responsible for the death of Vito's father. The enraged Vito massacres Derek, his enforcer Steve and his gangsters. Joe and Vito are then kidnapped by Vinci's men as Frank tries to find out what is going on, but they both massacre a load of Vinci's men and escape. Vito pays back the loan shark, finding out he was also the loan shark his father borrowed from, but decided to walk away.

Vito was called by Underboss Eddie to meet boss Carlo at his Planetarium. While heading there, Vito is told to get into a limo by a mobster, which has Leo and the Traid's boss inside. They tell him that the only way he would walk was if he killed Carlo, who they are scared will rat everyone out when arrested. Vito agrees and heads straight to the Planetarium, where Carlo waits and tries to convince Joe to kill Vito on the agreement he will be given the role of a Capo. But Joe decides against the idea and assists Vito in taking down Carlo.

When leaving, Vito and Joe come across Leo and many gangsters waiting for them. Leo asks Vito to join him in a separate car as there is "more to talk about". Joe gets into another car, which takes him to a different direction. When Vito panics and asks Leo where the mobsters are taking Joe, Leo apologizes and states that Joe wasn't part of their deal, and realization of the situation hits Vito, shocked that his long-life friend would be dead. 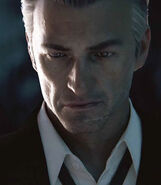 Vito being rescued by Lincoln.

Vito with Lincoln and Cassandra.

Vito with Lincoln, Cassandra, and Burke.

Vito at one of the sitdowns.