Leader of the Master Builders

To stop the Kragle from destroying the Lego world. (succeeded)

Vitruvius is one of the two tritagonists (alongside Batman) of the 2014 Lego crossover film, The Lego Movie, and a posthumous character in its sequel The Lego Movie 2: The Second Part. He was the leader of the Master Builders, consisting of Lego versions of famous characters. He called upon Emmet to help save the Lego characters from the evil Lord Business.

He was voiced by Morgan Freeman, who also played Lucius Fox in The Dark Knight Trilogy, God in Bruce Almighty and Evan Almighty, Ellis Boyd "Red" Redding in The Shawshank Redemption, William Somerset in Se7en, Azeem in Robin Hood: Prince of Thieves, Joe Clark in Lean on Me, Thaddeus Bradley in the Now You See Me franchise, and Patrick Meighan in Ted 2. In The Lego Movie Video Game, he was voiced by Josh Robert Thompson.

At the beginning of the film, while fighting Lord Business, after getting blinded by him, he reveals a prophecy that a "Special" will find the Piece of Resistance that will stop the Kragle, a weapon that Lord Business plans to use to destroy the Lego world.

He is last seen in a cantina bar playing the piano to "Everything is Awesome", until Wyldstyle tells him that it is her, and at that point he agrees to join Wyldstyle and Emmet on the journey. He urges the Master Builders to calm down and be sure of themselves that Emmet will find a plan to restore peace to the Lego world.

Later in the film, during Emmet's attempt to destroy the Kragle and free the Master Builders, Vitruvius attempts to fend off Lord Business's robots. He succeeds, but is killed when he is decapitated by a penny that is tossed through his head, courtesy of Lord Business. His bodyless head tells Emmet that he made up the prophecy before he died (humorously with two x's on his eyes to show he is dead). He later shows up as a ghost (humorously a real Lego Virtuvius with a ghost sheet on him tied to a thread of yarn being dangled upon) and tells Emmet he made up the prophecy because anyone can be special and creative.

He later shows up at the end saying how he liked Emmet before he was special.

The Lego Movie 2: The Second Part

Vitruvius (as a ghost) made a small appearance at the Prologue of the movie. He was accidentally knocked away by MetalBeard as the DUPLO Invaders arrived to "destroy" them. He also appeared banging on the door when General Sweet Mayhem attacked Apocalypseburg.

He is a very wise and old character who promotes creativity and attempts to teach Emmet how to use his mind to become a Master Builder. 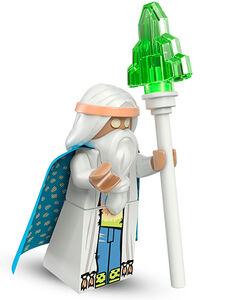 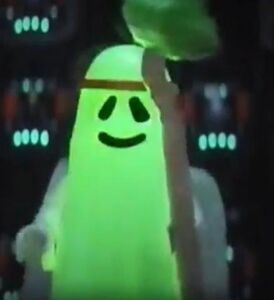 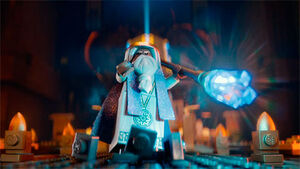 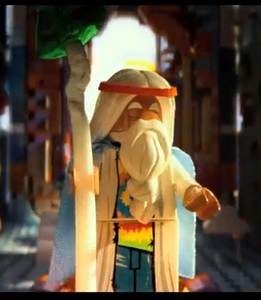 Vitruvius at the Puppy Court in Cloud Cuckoo Land.