Vixen is a superheroine from DC Comics and also the first black DC heroine.

In ancient Africa, there was a legend that the warrior Tantu asked Anansi the Spider to create a totem that would give the wearer all of the powers of the animal kingdom, if they would use the power to protect the innocent. As shown in the pages of Animal Man, it is possible that the "Anansi" who Tantu met, may have been a member of the alien race who gave Buddy Baker the ability to "tap the morphogenetic field" — or, as shown in the pages of Justice League, the aliens may have been Anansi in disguise. This field allows Buddy to imitate the abilities of nearby animals. According to the Animal Man series, Mari's Tantu totem may tap into that same field. Tantu used the totem to become Africa's first legendary hero. The totem was later passed down to Tantu's descendants until it reached the McCabes.

Growing up in a small African village in the fictional nation of Zambesi, M'Changa province, Mari Jiwe McCabe hears the legend of the "Tantu Totem" from her mother. Sometime later, Mari's mother is killed by poachers and she is raised by her father Reverend Richard Jiwe, the village priest. Reverend Jiwe himself is killed by his half-brother (Mari's uncle) General Maksai. Maksai wants the Tantu Totem, which Jiwe had possessed.

Mari moves to America, where she establishes an identity as Mari McCabe and gets a job as a model in New York City. She uses her newfound wealth to travel the world. On a trip back to Africa, she comes across her uncle and takes back the Tantu Totem, using its power to become the costumed superhero Vixen.

After this, Vixen made only two appearances as a solo crime fighter: once fighting poachers in India and then against the techno-psycho criminal, Admiral Cerebrus. In fact, she was a reluctant hero until the Justice League of America was reorganized by Aquaman. She applies for full-time League membership and is accepted. During her time with the JLA, the totem is taken from her by General Maksai, who still sought its power. The totem would only grant its full power to those who would use it to protect the innocent, and it causes Maksai to be transformed into a raging beast. Maksai dies in battle with Vixen. When the team faces the killer android Amazo, Vixen and several of her teammates are beaten into unconsciousness and then left bound and gagged in a walled off pit. Vixen saves the lives of herself and her fellow Leaguers by using her powers to shatter her bonds and dig to freedom. Vixen continues with that particular incarnation of the JLA until two members were killed, Steel and Vibe, and it was disbanded by the Martian Manhunter.

Around this time, Vixen teams up with Animal Man again. She travels to his suburban house with knowledge of a mysterious murderous force. Animal Man's own powers have become affected because of this force, as he finds himself unable to correctly access the right powers.

Vixen returns to modeling, but a Caribbean photo session turns violent; Mari's colleagues are killed by drug smugglers. She appeals to the government, who turn the matter over to the Suicide Squad. She goes undercover to capture the drug kingpin Cujo, who has been revealed by footage shot during the shoot. Along with Captain Boomerang and Black Orchid, she destroys the operation, but not before she loses control and kills the criminal kingpin, too. Revolted by what she has become, she agrees to work with the Squad until her animal instincts can be curbed. She works with the Squad for some time, again seeing more teammates and friends killed. When it is disbanded for a year, Mari returns to modeling and even launches a successful line of clothing. Her failed romance with Ben Turner (the Bronze Tiger) makes Vixen decline an offer to rejoin the Squad. She realizes Turner needs mental support, and she reluctantly returns. She ultimately gives up on a future with the Tiger, sensing that he would never admit to needing help, and leaves the team.

After the Suicide Squad's heyday, Mari continues to do undercover work. She is drafted for at least one mission for Checkmate (the Squad's brother organization). At some point, she signs on to work with Oracle's Birds of Prey. She goes undercover to investigate a strange "superhero" cult, where the leader was using mind control and winds up brainwashed by him herself. The Huntress tries to help her and is nearly killed. Vixen regains her senses by channeling the stubbornness of a mule to hold back the mind control of the cult leader. She and Huntress then rescue the other brainwashed heroes.

Vixen may still have trouble controlling her animal side while using the totem, as witnessed when she worked alongside the Flash to stop Gorilla Grodd. She also serves on one mission with the Justice League Task Force, came to Wonder Woman's aid during a battle with Circe, and helps her former JLA comrades protect Lex Luthor. She then joins the loose-knit Ultramarine Corps. While part of the Corps, Mari is brainwashed by Gorilla Grodd who sends her and other heroes to battle the JLA. Ultimately, Vixen and the others are freed. The main Corps members move on to another universe. Through all of these adventures she manages to remain active in the fashion industry.

After the murder of Sue Dibny in the Identity Crisis miniseries, Vixen rejoins her Justice League colleagues. She is present when the original Firestorm dies during a battle with the Shadow Thief. Vixen adopts a new uniform in Infinite Crisis #7, similar to the one worn by her television counterpart on Justice League Unlimited.

Vixen is tricked into battle in Hub City by a currently intelligent Solomon Grundy (whose rebirth came with increased intelligence). The totem is essential to Grundy's plans: he intends to use it as a catalyst to merge his perpetually reincarnating soul with the shell of the Amazo android, and thus gain further power. Grundy uses the totem to increase the metahuman mimicking abilities of Amazo. Without her totem, Vixen finds that her innate connection to the "Red", the 'essence' of animal life', is falling apart. She manages to 'lock onto' the totem, but her mind becomes lost in a flock of migrating birds. After mimicking the abilities of a young boy, Vixen manages to regain her mind and quickly flies to New York to retrieve her totem. Vixen literally drops into the JLA battle against Amazo. After the villains are subdued, Vixen becomes a charter member of the newly revamped Justice League of America.

Vixen's main story arc in the early issues of Justice League of America vol. 2, center around a change in her powers, which means she is no longer drawing on animal characteristics, but rather the powers of those around her, matching their skill levels and, she suspects, draining powers from the owner him/herself. Superman is first to catch on to this and she subsequently reveals it to Red Arrow.

She seeks out her former Suicide Squad teammate Bronze Tiger to discuss her situation, and subsequently admits everything to the League. Chairperson Black Canary instructs her to hand in her credentials and removes her from the team, but then discusses with Mari the possibility of seeking Zatanna's assistance in fixing the properties of the totem.

When Zatanna attempts to find the source of the problem, she sees a mystic image of Vixen and Animal Man as puppets. When she tries to break the spell, she is repelled by an unknown force. When Vixen attempts to defeat the newly-restored Amazo by absorbing all his stolen powers, she becomes mysteriously weak. She falls unconscious, with Amazo bearing down on her.

When Zatanna and Red Tornado finally resolve the crisis, Vixen goes to seek Animal Man, since he's been affected by similar power fluctuations, and left unable to tap into the powers of Earth-borne animals. There, they are both sucked into the Tantu Totem, where, like in Zatanna's vision, they are entrapped into Anansi's net. Anansi, the Trickster God of African folklore, reveals his powers and how being the King of the Stories, he changed Buddy and Mari's personal histories and sources of powers to test them.

In an attempt to keep them contained, Anansi restores their connection to the Red, but alters the personal histories of the Leaguers, to prevent them from ever founding the JLA. Vixen however escapes, and seeks the new Leaguers to fight Anansi at their side. Although she succeeds in gathering allies, they are still no match for Anansi's power. Vixen holds a gun to her totem, knowing that if it is destroyed, they will all be destroyed, and forces Anansi to return things to normal. Anansi then reveals to Mari that the whole thing was actually a test. He explains that reality had been changed on a fundamental level, and he needed someone to act as his agent against an individual who could take advantage of the situation. He restores Mari's powers, returns her and the JLA home, and says that he will one day call upon her.

Animal Mimicry:Vixen has the power to mimic the abilities of any animal she knows of, the ability apparently gives her intuitive understanding of the animals and what abilities they have that may be useful in the situation. She can switch between the abilities with ease in a split second.

Enhanced Claws:Vixen's claws are particularly sharp and tough, enabling her to rend through a variety of substances, such as fabric, wood, even soft metals and cinder block with ease. Her claws are magically enhanced and have drawn blood from individuals who are consider highly durable like Geo-Force and Superman.

Animal Metamorph:Occasionally, she has been known to physically transform into animals - for example: she has shape-shifted into animals, such as a wolf, a great horned owl, and a cougar.

Enhanced Healing:The totem even allows her to heal bruise and wounds within seconds by simply touching it.

Morphogenetic Field Manipulation:While the full extent of Vixen’s control over the Morphogenetic field is unknown, she has on occasions drawn pure energy from it and displayed this energy as a force field and energy claws. While in cooperation with Animal Man and the woman known as Tristess, she creates an entire universe.

Indomitable Will:Mari has fought Amazo, Despero and countless other Justice League villains over her heroic career. Despite her experience when she was trapped underwater inside of a collapsed building she still summoned the inner strength necessary to free herself and Red Arrow.

Animal Behavior:One apparent drawback of Vixen's powers is that she is not always able to control the inputs from the Morphogenetic field. Sometimes, she has absorbed unwanted animal behavior, such as instinctive rage. Meaning the longer she stays in contact with the Morphogenetic field, the less human and more animal she seems to become.

Tantu Totem:Vixen wields an object called the Tantu Totem, a fox-shaped talisman, which enables her to tap into the "morphogenetic field" of the Earth, sometimes known as the Red. This allows her to mimic the abilities of any animal she can think of, by simply focusing on a specific animal abilities and then drawing it directly from the field. She has demonstrated the ability to hold onto the Morphogenetic traits of an entire forest of animals. The Totem isn't the source of her powers but rather helps her channel the power. 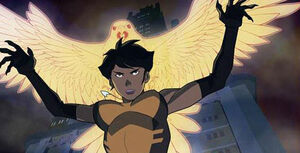 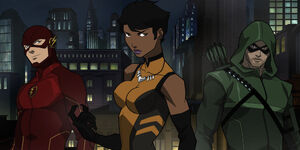 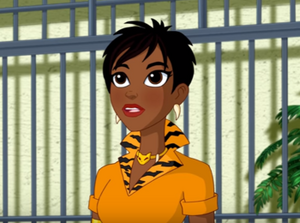 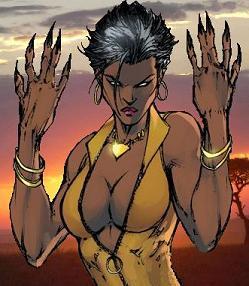 Retrieved from "https://hero.fandom.com/wiki/Vixen?oldid=1654276"
Community content is available under CC-BY-SA unless otherwise noted.