love his family and to kill his enemies

Vlad III Tepes aka Dracula is the titular main protagonist of Dracula Untold.

The film tells the origin story of Dracula, and recounts his battles against the Turkish Army. In the film he is played by Luke Evans, who also portrayed Aramis, Owen Shaw, and Bard the Bowman.

Events of the film

Years prior to the film, Vlad was one of the Christian Boys picked to be Janissaries for the Turkish Sultan. Vlad would later become know as "The Impaler" for using wooden stakes to have his enemies impaled. He developed a reputation as a monster, and was made prince of Transylvania, a tribute territory for the Turkish army.

Present Day and Fighting the Turkish Armies and its Leader

At the films present, Vlad has a wife named Mirena and son named Ingreas. One day the Turkish army arrives and refuses the silver coins as usual tribute, but requests on behalf of Sultan Mehmed II, that 1000 young boys be recruited to their army, Vlad's son including. Vlad refuses, but finds he needs stronger forces to battle the Turks.

Desperate, Vlad goes to the vampire caves and approaches the Master Vampire, and explains his story to him. The Master Vampire tells him about the risks, but offers him power - Vlad will dring the blood of vampires and have their power for three days, during that time he will be tempted for human blood, and should he submit to it, then he will be vampire for all of eternity, if not, then his humanity will be restored. Vlad accepts the offer.

Fighting the Turkish as Vampire

Upon returning home, he witnesses a siege on Castle Dracula, which he single handedly fights them off, killing all but one, who he leaves as a messager. Determined to protect his people, Vlad has a massive party of Transylvanians flee to the monastery in the mountains, that the Turks will be unable to siege. There Vlad meets Shkelgim, who declares himself Vlad's servant and offer his blood, much to Vlad's anger. The Turkish attack the Transylvanian army and Vlad helps in the fight but his demonic powers are exposed. His people turn on him and decide to kill him by burning him in a tent. Vlad manages to escape, before calling out his people on this perceived betrayal.

Transforming the Turkish to Vampires

That night, an army of Turks begin their invasion, and Vlad transforms into a cloud of bats to defend his territory, only to discover they are decoys while the real Turkish raid the monastery and massacre the civilians. Despite his best efforts, Vlad could not save Mirena from falling to her death, but honors her last request by feeding on her blood to save their son, but at the same time solidifying himself as a vampire. Vlad returns to the Monastery to find thirty odd survivors and offers them each a chance of revenge, turning them into vampires.

The Battle with the Entire Armies and Killing Mehmed

Vlad leads his small army to Mehmed's army camp, while Mehmed prepares a massive invasion of Europe. Despite being out numbered by thousands, they manage to wipe them all out, leaving Vlad to fight Mehmed. But Mehmed is prepared and placed silver coins on the floor to weaken Vlad, using a silver sword to fight and wooden stake to finish him off. Despite being overwhelmed, Vlad briefly transforms into a flock of bats and stabs Mehmed with the stake before drinking his blood. Vlad declares himself no long Vlad, but Dracula - son of the devil. Dracula finds his son, but the other vampires wish to feed off of him, seeing all humans as the enemy, and that Ingreas doesn't matter now.

Saving his Son and Becoming Legend

The vampires stop by a monk with a Christian cross. After consoling his son, Dracula has the monk take him away, turning into a cloud as cover. The sun rises and the vampires burn to dust. Dracula stands proud before seemingly burning himself. Shkelgim finds Dracula and has him feed on his blood. With his enemies, defeated, and the world believing him dead, Dracula disappears from public eye, while Ingreas is made the new prince, and over time, Dracula has became a name in legend.

The film skips to modern times, a woman named Mina who strikingly resembles Mirena is approached by a man who complements her flowers and recites her favourite piece of poetry. The man is revealed as Vlad, and the two depart together. Unbeknown to him, the Master Vampire is also still alive and watching them. 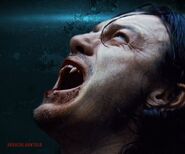 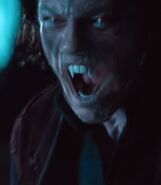