Benefactor of the Kingdom of Lugunica.
Trial guardian of the Pleiades Watchtower.

Stop the Witch of Envy from destroying the world (succeeded).
Protect Lugunica from external threats (succeeding).

Benevolent Dragon
Volcanica, also known as the Holy Dragon or Holy Dragon Volcanica, is a major character in the 2014 Japanese dark fantasy light novel Re:Zero − Starting Life in Another World, as well as a mentioned character in its anime television series and manga adaptations of the same name. Although he rarely appears in the story, he is often mentioned due to his key role in the history of the world and overall plays a major role in the narrative. He is also mentioned in various related works, including video games, side stories, and short stories all based in the narrative universe of Re:Zero.

Volcanica was the name of a legendary and powerful dragon who was born long before the time of the Witch of Envy. At some point, the Dragon made a pact with the Last Lion King Falseil Lugunica that ensured he would protect the Kingdom of Lugunica as long as Falseil's lineage prevailed. In honor of the contract, Volcanica protected Lugunica from external threats and bestowed bountiful harvests upon the nation using his divine blood. The people of Lugunica revered their holy benefactor as a deity worthy of the highest honor.

Volcanica's deeds of legend did not stop with the formation of the covenant. Alongside the first Master Swordsman Reid Astrea, the Sage Flugel, and Flugel's apprentice Shaula, the Holy Dragon battled and defeated the infamous Witch of Envy. The Jealous Witch, who had destroyed half of the world with her terrible power, could not be killed and was therefore sealed by the heroes.

In addition to the Witch of Envy, Volcanica duelled the Witch of Sloth Sekhmet at the edge of the world. Although Sloth was incredibly powerful, the Dragon claimed victory when Sekhmet fell off the edge. He was also apparently responsible for the eternal imprisonment of the Witch of Greed Echidna. Over the next four hundred years, Volcanica vigilantly protected Lugunica per the contract, although an event that would prompt him to intervene failed to occur for over three hundred years.

Volcanica was an incredibly large and powerful dragon who possessed a deadly sharp wit and enough magical energy stored within his body to coat the entire world in his power. One day, many years after his birth, Volcanica became acquainted with Falseil Lugunica. Falseil was the Lion King who ruled over the Kingdom of Lugunica, a country considered to be one of the three great nations of the world. Using a woman known as the "Dragon Priestess" as a medium, Volcanica and Falseil made a covenant. The covenant dictated that as long as the lineage of King Falseil was maintained as the ruling body of the nation, Volcanica would protect the nation from external threats from other countries. Furthermore, by bestowing his blood on the ruler of Lugunica, the Kingdom's harvests prospered. Additionally, Volcanica gifted the Kingdom with an artefact known as the Dragonstone, a slab of stone that would give Lugunica information regarding the future that was always true. Thanks to the Dragonstone, the Kingdom was able to prepare for and avoid numerous tragedies.

At some point, Volcanica visited Flanders, a city located in the southern part of Lugunica. It was there that he was bound in friendship with the Master Swordsman Reid Astrea, the Sage Flugel, and the Sage's right-hand woman Shaula. At the time, Volcanica used his power to create creatures known as ground dragons in the city. At some point, the Witch of Sloth Sekhmet used her tremendous power to drive Volcanica past the Great Waterfall that rested at the edge of the world. Sekhmet had apparently been motivated by a desire to rest. Nevertheless, the action caused a battle between the Witch and the Dragon that ended with Sloth falling from the Waterfall to her death. At another point in time, the Witch of Envy Satella went on a rampage, destroying roughly half of the world in the process. The combined power of Volcanica, Reid, Flugel, and Shaula was able to defeat the Jealous Witch. However, as Satella could not die, the heroes sealed her in a shrine located near the Great Waterfall. Volcanica and Satella were apparently friends before the atrocity committed by the Witch of Envy. The Dragon felt remorse and a sense of personal guilt regarding the calamity of Envy. At another point in time, Volcanica destroyed the body of the Witch of Greed Echidna and sealed her soul in a tomb.

After his dealings with the Witches, Volcanica became far less active. Over the next centuries, Volcanica vigilantly watched over the Kingdom of Lugunica from beyond the Great Waterfall, only descending to provide his blood to a new ruler or to protect the Kingdom in its time of need. Unsurprisingly, Volcanica became a legendary figure across the world for his numerous deeds. Lugunica revolved much of its identity around the Dragon, making him the new symbol of the Lugunican Royal Family and of the Kingdom as a whole. He was recognized as a deity known as the "Holy Dragon" who was respected and worshipped by the people. At some point, the nation became known as the Dragonfriend Kingdom of Lugunica in reverence to the Holy Dragon Volcanica. The enemies of Lugunica, especially the Empire of Volakia located to the south, neglected to wage war with the Dragonfriend Kingdom out of fear that they would earn Volcanica's fury. The ground dragons created by Volcanica were mass-bred and used around the world as steeds and transportation. Flanders became famous as the birthplace of ground dragons and was eventually elevated to be one of Lugunica's five great cities.

Volcanica was a divine being of almost unrivalled power. The only entities known to be more powerful than him were the unkillable Witch of Envy Satella, the undefeatable Master Swordsman Reinhard van Astrea, and possibly the First Master Swordsman Reid Astrea. He was able to single-handedly defeat the Witch of Sloth Sekhmet whose power was only surpassed among the Witches by Satella herself. His might was such that the powerful half-elf Emilia struggled to survive against him while he was only unleashing ten percent of his full power. 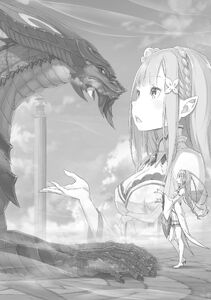 Volcanica talking to the half-elf Emilia on the top floor of the Pleiades Watchtower. 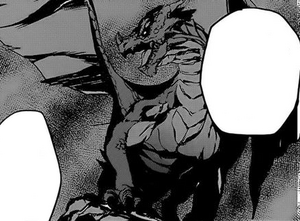 Subaru Natsuki learning about the Holy Dragon from the Great Spirit Beatrice. 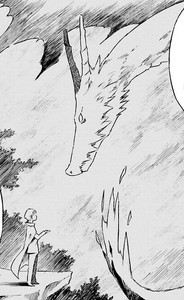 Marcus Gildark explaining the history of the covenant to the participants of the Royal Selection.