Voyd, real-name Karen, is a supporting heroine in the film Incredibles 2. Voyd is a superheroine with the power to make mini-two-way-wormholes.

She is voiced by Sophia Bush.

Because of the banning of Superheroes (having been triggered by Oliver Sansweet when he sued Mr. Incredible for ruining his suicide), Voyd was forced to hide her abilities from the world like other Supers. Being unable to be herself was hard for her, and when Winston Deavor sets out to bring superheroes back, she gets her chance to embrace her true self as a superhero. Despite being a powerful girl, Voyd is both eager and nervous about becoming a superhero in Winston's goal to bring them back.

As a mega-fan of Elastigirl, Voyd looks up to her as the one woman in her life who has made her feel hopeful and consider her powers to be a gift and not a curse.

Following a lawsuit against Mr. Incredible several years ago having triggered by Oliver Sansweet, a wave of legal cases set a strong precedent for being able to hold meta-humans responsible for any/all damages, unintended or even open to invitation caused by them while out stopping crime. The government helped many of these supers disappear to avoid constant lawsuits that would bankrupt the cities with legal fees and likely ruin the previous defenders of the peace whom the government had relied on.

Ever since the law banning supers from publicly saving the day, any meta-humans are required to hide their presence and leave crime-fighting to state law-enforcement. However when the billionaire, Winston Deavor finds out that meta-humans are still around after catching Mr. Incredible and his family, all supers, trying to covertly foil a bank robbery he makes up his mind to try to help change the law and hires Elastigirl as a spokeswoman for the movement by outfitting her with miniature cameras designed by his sister Evelyn. With Elastigirl as a first-person camera for audiences and Winston campaigning for a lift on the meta-human restrictions, many other meta-humans begin dawning their costumes in anticipation of the change in the law, among them Karen, who takes on the name Voyd.

Voyd is introduced in Chicago when Deavor and Evelyn arrange a get-together of meta-humans to meet Elastigirl. Voyd introduces herself as a long time fan who felt repressed ever since she discovered her powers, but was forbidden to use them. Seeing Elastigirl in action and knowing she may well end up making it legal for folks like Voyd to be able to publicly use their powers to save the day prompts Voyd to express her deepest of gratitude. Deavor is going to try to provide Voyd and the other aspiring supers a place to train while the law is being changed. Voyd in particular seems to be hoping to be able to play side-kick to Elastigirl at some point when/if the law is changed.

Soon after Winston's sister, Evelyn revealed her true nature, Voyd was placed under her control with hypno-goggles along with the other supers and instructed to capture Bob and Helen's children. While the children manage to get away in the Incredibile thanks to Lucius Best/Frozone coming to their aid and fending them off, they manage to capture and put a pair of goggles on him, putting him under Evelyn's control as well. As soon she has discovered that Violet, Dash, and Jack-Jack had entered the ship, she has a struggle against Violet, whom she tries to place a pair of hypno-goggles onto, but is kicked away and blasted over the railing. Violet, Dash, and Jack-Jack escape and release their parents and Frozone from Evelyn's control. Voyd and the other wannabe supers arrive and attack the Incredibles; she goes one-on-one against Elastigirl, who tries to hit Voyd with long-distance punches and kicks, only for the latter to defensively redirect the older superheroine's ranged assaults via her generated portals. Voyd even succeeds on the offensive by catching one of Elastigirl's punches through a portal and then manifesting the exiting one close to her idol, causing Elastigirl to sucker-punch herself. However, Elastigirl then swiftly enacts a counter-tactic to Voyd's portals by veering her punch after it goes inside and exits close to where Voyd is, finally managing to strike the space-warping super. Elastigirl immediately removes the goggles from Voyd, freeing the latter from Evelyn's control. Having regained her mind, Voyd helps Elastigirl board the jet Evelyn is trying to escape on and catches them both in a portal as they fall from the sky.

After Evelyn is arrested, Voyd strikes an applauding conversation with Violet, who apologizes for attacking her on the ship. Voyd is last seen witnessing the reinstatement of the Supers Relocation Program, making supers legal once again and thus undoing the wrongful actions of Oliver Sansweet.

Voyd's superpower is the ability to divert and warp objects around her to elsewhere by creating voids that allow the objects to appear and disappear. With this, she can instantly transport objects and allies to and from away from herself, bypass certain defenses (i.e. Violet's force-fields), as well as to re-direct imminent danger headed her way. Her ability to generate wormholes makes her a formidable hero at virtually any distance and perfect for missions that require long-distant travels and quick escapes. However, her denominational wormholes can sometimes be unpredictable. It is currently unknown what could happen should her portals de-manifest while something, or someone, is still passing through as the hole in space-time closes.

However, she does have her weaknesses. Though her inter-dimensional powers would appear to have an impressive range, they appear to be dependent on her line of sight to be deployed with consistence since it took her several attempts to get Elastigirl into Evelyn's getaway aircraft; that is, literally into the vehicle's interior, fuselage and all, which Voyd could not see in plain sight - hinting that vision is a crucial factor when utilizing her powers. Likewise, Voyd's wormholes seem to be dependent on her hand movements in order to properly direct where these portals would manifest from place to place. 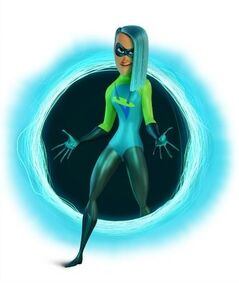