Vulpix is a Fox Pokémon from Generation 1. It evolves into Ninetales with contact of a Fire Stone. It shares the same traits with Growlithe.

Brock had a Vulpix that he obtained from Suzy in Kanto in Pokémon Fashion Flash.

Vulpix was given to Brock by Suzy in the episode Pokémon Fashion Flash. Suzy was Brock's idol, and Vulpix took a liking to him, which was surprising, as the little Pokémon had a very snobbish nature. It even liked Brock's homemade Pokémon food. It drove away Team Rocket with a very powerful Fire Spin, driving home the point that a focus on outer beauty could eclipse a Pokémon's inner strength. Impressed with the way Brock cared for his Geodude and Ash's Pikachu, Suzy decided that Brock might be able to take better care of Vulpix than she could.

Like many of Brock's Pokémon, Vulpix received very little screen time compared to the Pokémon of other main characters. When it was featured, Brock was often seen grooming and pampering it. This led to events in The Ninja Poké-Showdown, where Misty offered to trade her Psyduck for Vulpix, being sick of her Psyduck's headache and annoyed at Brock's compliments of Vulpix. Later the group met the Eevee brothers in The Battling Eevee Brothers who were throwing an evolution party for their younger brother Mikey to evolve his Eevee. Pyro of the Eevee Brothers offered Brock a Fire Stone to evolve Vulpix. However, Brock declined, saying that he didn't want to force Vulpix to evolve if it didn't want to.

Brock later met up with Suzy again in Johto and returned Vulpix to her in Beauty and the Breeder, saying at the time that he had always felt that Vulpix wasn't really his and he was just looking after it for a time. It also reappeared in a flashback in Gotta Catch Ya Later!.

Ash obtained the egg from Professor Oak, who asked of him and his mother to deliver the egg to Samson Oak in Alola. After arriving to the Pokémon school in the Alola region, Ash gave the egg to Samson Oak, who contacted Professor Oak, his cousin. Later on, Samson presented the red egg alongside the white egg to Ash and his classmates, asking them to choose which egg they would take care of while he would take of the other one. Since Lillie was taking care of the white egg, Samson was taking care of the red egg. Shortly after Snowy hatched Samson's egg began to hatch, too, into a red Vulpix.

Vulpix took an instant liking to the other Pokémon as they welcomed it to the world with Samson Oak as its trainer. Ash greeted Samson's Vulpix and Lillie's Alola Vulpix, the latter freezing Ash and Rotom with Powder Snow and the former burning them with Ember. Samson's Vulpix also tried to befriend Snowy, who ignored it. This changed the next day, with Snowy welcoming Samson's Vulpix. One day, a cameraman filmed Samson and Vulpix, as the latter had won the Pokémon Pancake race. The next day, Samson told this to Rotom, giving him more clues to where to find the Electrium Z. Samson also had the thought of entering the next year's race with his Vulpix. When Delia, Ash's mom, came to school, she encountered Samson's Vulpix, and stroked it. Ash, during the presentation, compared that Vulpix with Lillie's Snowy, its Alolan counterpart. Vulpix accompanied Samson Oak during Professor Kukui and Burnet's wedding. Kukui also compared Samson's Vulpix to Lillie's Snowy, explaining that the climate could have an effect over Pokémon, and believed the same could be applied to humans. Vulpix was with Samson Oak, who was feeling unmotivated on a cloudy day.

Snowy is an Alolan Vulpix owned by Lillie. Snowy is her first Pokémon.

Snowy, when hatched, is a very curious and naive Pokémon due to her young age, but she also started off as a bit shy around others, and even gave Ash her version of a cold shoulder when he tried to pet her by freezing him with her Powder Snow to keep everyone away from her. Much like Serena's Sylveon, as a Eevee, was comfortable with Clemont's Bunnelby and their friendship, Snowy felt comfortable and is best friends with Ash's Incineroar, due to also not being entirely too hyperactive and energetic as Lillie and Snowy herself. Also, Snowy easily formed a close friendship with Ash's Pikachu, Mallow's Tsareena, Sandy and Shaymin. Snowy is even good friends with the rest of the Pokémon owned by her Trainers friends and with Gladion's Pokémon as well.

She also shows great bravery when trying to protect Lillie from Team Rocket. Initially, Snowy didn't want to play with her trainer friends Pokémon or be friends with them either at first but eventually warmed up to them in the end. Snowy also had trouble opening up to other people, but began to warm up slowly after staying with Ash and his Pokémon temporarily.

Snowy can also be naughty at times, such as freezing Lillie to show her affection.

Despite her confidence, Snowy is shown to be uncertain about evolving when Lillie sees that Snowy isn't ready to evolve yet when she shows her the ice stone and Lillie keeps until she is ready.

Vulpix with her original owner Suzy 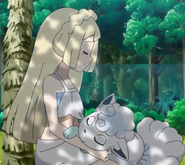