WAC-47 was the supporting character in the Star Wars series. He was a masculine-programmed DUM-series pit droid who served the Galactic Republic during the Clone Wars. He was a part of D-Squad along with several other droids on an important mission, serving under Colonel Meebur Gascon and piloting his ship.

For all his flaws, WAC showed he can handle himself when he successfully tricked two Super Battle Droids into walking into an elevator and locking them inside. He's also not afraid to fight despite not being equipped with any weaponry.

WAC can be condescending towards astromech droids, insisting he is a superior model to them. However, he cares deeply about Gascon and the Galactic Rebublic as he agrees with R2 that BZ should not be abandoned. While he manages to save the day several times, it is often after WAC has endangered the mission just as often through his incompetence. He does genuinely care about the other droids though. 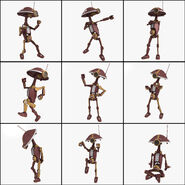 Add a photo to this gallery
Retrieved from "https://hero.fandom.com/wiki/WAC-47?oldid=1759939"
Community content is available under CC-BY-SA unless otherwise noted.