Save his sisters life

Help his village recover
Keep Salazar away from the wishing star (all succeeded).

Orphan
NOTE: This page is about the movie version of Wakko Warner. The other version can be seen here.

Wakko Warner is the main protagonist of the direct-to-video animated film Wakko's Wish which served as the series finale of Animaniacs until the 2020 reboot.

Like his TV counterpart he is voiced by Jess Harnell.

Unlike his TV counterpart who was born by being drawn in an animation studio, this Wakko was born to King William and his unidentified Queen, of the Kingdom of Warnerstock. He was the middle child, with an older brother, Yakko, and a younger sister, Dot. Sadly, Wakko never knew his mother and father, because they were murdered by King Salazar of Ticktokia who invaded Warenerstock and seized the throne. He then exiled the infant Princes and Princess to the village of Acme Falls, and they were raised in an orphanage that was a living hell.

Over time, Salazar's tax policy bleed every Warnerstock city, town and village dry. Things stopped working, growing, people began to starve, businesses shut down, as did the the Orphanage, forcing the Warners to live on the streets. (ironically, they found the orphanage better) Acme Falls quickly changed from a happy village, to a cynical one where everyone doubted the future, even Yakko and Dot. Wakko, on the other hand, tried to remain positive and told everyone to cheer up and never give up hope.

His words moved the village and they hoped... only to learn the hard way that hope alone is not enough. Because one day, Dot became ill and needed an operation to save her life. So, Wakko decided to leave Acme Falls to find work so that he could get money to pay for it while Yakko looked after Dot. However, despite his hard work, Wakko only earned a ha'penny. Ironically, due to the town's bankruptcy, they were too desperate to dismiss such a meager amount and Wakko promised to use it to pay for Dot's operation, calling it a "present to her from me". Unfortunately, his luck was short lived. Baron von Plotz, the film version of Thaddeus Plotz, and Salazar's tax collector confiscated the ha'penny under the guise of tax collection.

Almost immediately, everyone had lost all hope and spiraled into depression. That evening, at the ruined water tower shanty the siblings used for shelter, Wakko watched his brother tell Dot her favorite bedtime story, and try to cheer her up despite her health, and felt guilt for not being able to earn enough to help her. After Yakko went to bed, Wakko looked up at the stars. Out of options and desperate for a miracle, Wakko chose a random star and begged for a wish to save his sister's life. As luck would have it, he ended up picking the right one, which proceeded to fall from the heavens and land in the mountains. Wakko was then instructed by his "Desire fulfillment facilitator" to travel to where the star landed, and touch it, as wishes must be made in person.

Wakko quickly told his siblings about this, and the following morning they prepared for the long journey by assembling a sled with a sail. As the rest of the townsfolk woke up, they learned about the Warner's goal, and having desires of their own, they all prepared to leave, and soon the race was on... including Plotz and his henchman, Ralph. As the cast raced to the star, Plotz and Ralph were detained by Salazar's men, who brought them to Salazar's castle, who ordered the two to secure the Star and ensure that no one touched it save for him... and kill the Warners, much to Plotz's and Ralph's shock.

Later, the Warners were forced to cross a dangerous ravine, across an old rope bridge. Due to Dot's health, Wakko and Yakko pulled the sled across, and apart from Wakko stepping on a loose piece and being saved from certain death by Yakko, the siblings crossed safely. Later, Plotz and Salazar caught up with the Siblings and tried to murder them by firing from their weaponized carriage. They ended up destroying all but 3 planks of wood on the sled, and due to comedic disasters going on with the rest of the cast, the entire village fell off a small cliff and crashed into the snow. There, Dr. Scratchensniff (who is an elixir maker) served everyone a new type of drink that had accidentally been created by Rita and Runt( who stowawayed in his carriage) and Buttons (who fell into the carriage while trying to keep Mindy safe) In the only time he used his mainstream counterparts humor, this caused Wakko to belch loudly, causing an avalanche, forcing the cast to run for it.

Despite their efforts, everyone got caught in snow again, and they emerged in mere walking distance to the star... only to find out that Salazar and his men had arrived first. He had the entire village imprisoned in a Nazi like prison camp and after some heckling from Dot, and having Plotz, Ralph, and the Goodfeathers arrested for failure and treason, ordered the Warners to be killed. Thinking fast, Yakko claimed that he and his siblings knew secrets about the star, and offered to give them, if Salazar treated him and his siblings to a feast, triggering the Warners typical "special friend" scenario found in most of the cartoons.

Inside Salazar's ice lair, the siblings tried to use a number of comedic tactics to defeat Salazar, including tricking him into thinking something was on his face, and causing him to think the star used literal meanings. That ended with Salazar losing his patience with their stall and ordered them all to be executed again. As they were blindfolded, Dot used her cuteness to cause the guards to change their minds. Yakko however, still knew that they were still in danger, grabbed his siblings and they ran for their lives towards the star.

Salazar quickly found out, and ordered his cannons to fire at the Warners. As the siblings, Dot stopped to catch her breath, and felt too weak to continue. Yakko begged his sister to keep coming and they were almost there. But the cannon fired at the siblings, sending them flying... and hitting Dot, much to Yakko and Wakko's horror. As she lay dying, snow began to fall, and she asked to be told her favorite bedtime story one final time. Yakko obliged, and his sister died in his arms. This heinous crime caused Salazar's men to turn on him. Meanwhile, Wakko, heartbroken, and having nothing more to lose, ran for the star, intending to wish for his sister back. Despite the canon's firing again, Wakko evaded the shot and touched the star... only for Dot to reveal that she was playing possum to buy Wakko time, much to Yakko and Wakko's relief.

With the desire for his sister's return fulfilled without the need for wishing for it, Wakko wished for two ha'pennies. Like last time, due to the town's bankruptcy, they were willing to accept this meager amount, much to Salazar's horror. With the first of the Ha'pennies, Wakko paid for Dot's operation and saved her life, and the other to get himself and his siblings out of the gutter. The Ha'pennies traveled throughout the village, causing other characters wishes to come true. Scratchensiff's business began booming, attracting more money and giving Acme Falls it's economy back, Rita and Runt to find a home, Buttons to be finally rewarded for helping Mindy, the Goodfeathers getting respect, Slappy's tree to blossem again, and Skippy to meet new friends.

As for Wakko and his siblings, they ended up with more then they thought. As Dot recovered the operation, Scratchensniff was able to track down the Warner's birth records, confirming that they were the son's and daughter of the late King and Queen. With this revelation, the Warners exiled Salazar, freeing Warnerstock, became co-rulers of the Kingdom, and Warnerstock entered a new golden age. He even hired the Brain as the Prime Minister, and made Pinky a stable mouse, as he had a crush on one of the horses.

Unlike his tv counterpart, this Wakko is much more consistent with his personality and has very little of his counterparts comedy. Without a gagbag, any eating jokes, or gookie jokes, all he has are his siblings. Despite the fact that they live in poverty with no mother or father, or even a permanent home, Wakko tries to remain optimistic and hopeful, and tries to inspire his brother, sister, and fellow villagers. When his sister becomes ill, Wakko's focus becomes her recovery. As such, Wakko loves his brother and sister with all his heart, and everything he does is done for them. He also has empathy for his fellow villagers due to him trying to inspire them and wishing for something that will not only help his family. but his fellow villagers.

Despite this, he still has a unusual and sometimes sarcastic sense of humor and some mild mischief. But these are reserved for when he feeling depressed or if someone is hurting him or his family or intends to hurt him or hid family. So his comedy is reserved for defense. Ultimately, he is much more heroic, brave, and kind then his mainstream counterpart.

It's a present to her from me 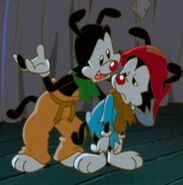 The answer to Wakko's prayers