He is a young teddy bear who lives with his owner Sally and is best friends and has a brotherly relationship with Benjamin Bear, who is the teddy of Sally's brother Simon.

Wally goes with Ben to attend the Teddy Bears' Picnic and is taught the ways of being a teddy bear, such as being a good listener, to not talk or move when people are present (known as "going teddy") and to never talk about the Teddy Bears Picnic.

During the journey to the woods where the picnic is taking place, Wally and Ben meet a human girl named Amanda who is lost in the woods and has lost her teddy Doc. Believing that Doc is attending the picnic, Wally and Ben disguise Amanda as a teddy bear. However after sniffing flowers, Amanda sneezes and her disguise falls off, causing the other teddies (sans Wally and Ben) to go teddy. Amanda is upset that she has ruined the picnic, but Wally calls for Doc, who reveals himself to Amanda who is relived to see him. This causes the other teddies to stop going teddy and allow Amanda to continue being there. Afterwards, Wally and Ben return home.

Taking place some time before The Teddy Bears' Picnic, this film shows how Wally met Ben and how he came to be Sally's teddy. Wally is first seen in a toy shop on Christmas Eve where he meets Ben (who was in the shop to look for Santa Claus to ask him to give Sally a teddy after the family dog Slurp destroyed Sally's letter).

Ben takes Wally to his home, but gets seperated from him when a snowplow drives by. On Christmas morning, Ben is worried that Sally will be upset about not getting a teddy, but is surprised when he sees that she did get a teddy, who turns out to be Wally.

The Secret World of Benjamin Bear

Wally also makes a guest appearance in The Secret World of Benjamin Bear (which takes place many years after the films) where he visits Ben (who is now owned by Simon's son Max) and his new friend Howie (the teddy of Max's sister Eliza). 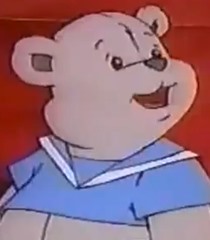 Wally and his best friend and brotherly figure Ben
Add a photo to this gallery
Retrieved from "https://hero.fandom.com/wiki/Wally_Bear?oldid=1611638"
Community content is available under CC-BY-SA unless otherwise noted.