To escape from the zoo he lives at. (somewhat succeeded)

He is more comfortable when he is at home, in the city zoo.

Mr. Twiddle (voiced by Don Messick and Neil Ross, 2007-present) is the zookeeper that keeps a close watch on Wally because sometimes he escapes to check out what things are like outside.

Wally is an anthropomorphic alligator who wears a violet-colored Hat, white shirt cuffs and a white collar.

He was Voiced by Daws Butler (whom also voiced characters such as Yogi Bear, Huckleberry Hound, Hokey Wolf, Quick-Draw McGraw, Snooper and Blabber Dixie, Mr. Jinks, Scooby-Dum, Reddy, Augie Doggie, Peter Potamus, Baba Looey, Lippy the Lion, Elroy Jetson and Peter Perfect) in the Series and other Series he appeared in with the except of Yo Yogi!, and Harvey Birdman, Attorney at Law. And he's voiced by Rob Paulsen in 1998-present. 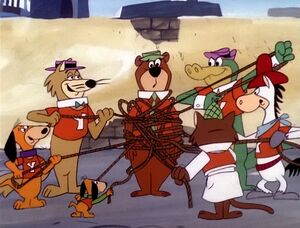 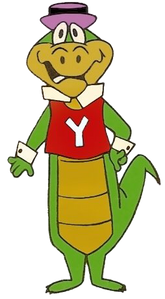