Spending time with his girlfriend Artemis.

Stop Black Beetle from destroying the world (succeeded, but at a cost of his life)

Superhero
Wallace Rudolph "Wally" West II, (Also known as Kid Flash) (Temporarily known as Dr. Fate) is one of the main protagonists of Season 1 and 2 of the TV series Young Justice.

Wally West, known as Kid Flash, was acting as the partner to The Flash, when at the age of 15, he was invited to join the Justice League. However he learned, alongside the other sidekicks, that full membership into the League was not on the table. They would only be given access to the League's public office and not the actual headquarters. At the end of Season 2 Wally West died while saving the Earth from Black Beetle's last attempt to destroy the earth passing his Kid Flash mantel to his cousin Bart Allen/Impulse.

He is voiced by Jason Spisak.

One day, Wally discovered his uncle Barry Allen was the Flash. Being the Flash's biggest fan, he begged his hero to let him become his sidekick. Barry refused, but that didn't stop Wally. He replicated the experiment that gave Barry his powers in his family's garage. He blew up the garage and ended up in the hospital. Barry felt guilty for leaving notes that Wally could work on. After he came out of the hospital, Wally manifested the powers he desired. Barry reluctantly agreed to let him become Kid Flash, but only if he did exactly as he said. He became a superhero in 2008.

During Season 1, Kid Flash is the team's fifteen-year-old speedster. He has enhanced speed, although he has not fully mastered his abilities, often falling down while running at high speeds due to a misstep. Kid Flash cannot vibrate his molecules through solid objects like the Flash and gets a bloody nose if he attempts to. He is a flirt, beginning with M'gann and extending to any woman he comes into contact with. Kid Flash and Robin know each other outside the team, even knowing each other's secret identities. Wally likes to collect souvenirs from the team's missions, such as T. O. Morrow's robotic eye and Cheshire's mask. Ava Dordi, of the Palo Alto Voice notes that Jason Spisak "captures the Lighthearted essence of Kid Flash well".

In Season 2 (set five years in the future), Kid Flash has given up the superhero life and is in a relationship with Artemis with the two living and attending college together. Wally does however, assume the guise of Kid Flash once again during the crisis involving Neutron wherein he assists Impulse and the two Flashes (Jay Garrick and Barry Allen) with containing a major explosion. It is revealed that Wally was aware of Nightwing's plan to fake Artemis's death so she could be placed in deep cover alongside Aqualad. He return to the mission during "Bloodlines" to stop Neutron and resume back into the team during "Summit". During "Endgame", he with Flash and Impulse manage to control the Magnetic Field Disruptor but due to his slower speed, the chrysalis' energy attacks him, causing him to disappear. In his dying moments Wally asked his uncle Barry to tell his parents and Artemis he loved them. When Wally disappeared entirely as the chrysalis's energy was finally dissipated, Barry honored him by telling Artemis that Wally loved her, much to the grief of his family, friends, and especially Artemis. 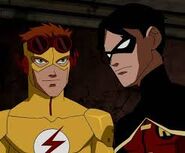 Kid Flash with The Team

Kid Flash with Jay Garrick, The Flash, and Impluse 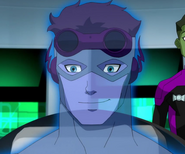 Wally Death
Add a photo to this gallery
Retrieved from "https://hero.fandom.com/wiki/Wally_West_(Young_Justice)?oldid=2088459"
Community content is available under CC-BY-SA unless otherwise noted.