Wang Jinrei (王 椋雷 Wáng Liángléi; Japanese Pronounciation: ワン・ジンレイ Wan Jinrei) is a fighting game character who was introduced in the original Tekken game and has returned for every other Tekken game, except Tekken 3 and Tekken 4.

Wang Jinrei is a brave old man who has a kind heart. Wang continued to remain generous and kind while living as a recluse in the Mishima gardens. Wang was a close friend of Heihachi Mishima's father, Jinpachi Mishima. After Jinpachi's death, he put his faith in Heihachi. However, Wang does not know of Heihachi's actions. He faces Marshall Law in the King of Iron Fist tournament and the fight ends in a draw.

As a close friend of Kazuya Mishima's grandfather, the user of the mind Kuni fist runs brave. Wang believes that peace will come once the Mishima Zaibatsu is ruined.

Ending Description, "Celebration": Wang walks up a hill while the sun is setting. He approaches a grave stone of Jinpachi Mishima. Wang pours a bottled drink on the top of the grave stone. Then, Wang pours some of the drink into a small cup. He drinks from the cup, and then he exhales. A close-up of Wang's face is shown as the ending video ends.

Long ago, Wang had a close friend from a distant land... Jinpachi Mishima. Just as the world was about to be engulfed in the flames of war, his friend comes to him and said "In order to bring about peace the Mishima clan must be destroyed".

Jinpachi disappeared leaving these words behind. Some time after, Wang learned of the death of his friend as the world was embroiled in war.

Thirty years later, Wang was living in isolation when an invitation to the King of Iron Fist Tournament 5 was delivered. Along with it was a message... "I need your help, old friend. Seek me out, Wang Jinrei". The letter was signed, "Jinpachi Mishima".

Believing his friend to be dead, Wang Jinrei was quite surprised by the message and decided to enter the tournament to look for Jinpachi.

Ending Description: Wang has defeated Jinpachi Mishima. Jinpachi's "Devil" form fades away, leaving only Jinpachi in his human form laying on the ground on his stomach. Wang holds Jinpachi, shakes him, and asks, "Jinpachi, are you ok?" Jinpachi replies, "I'm sorry I caused you so much trouble..." Wang says, "Don't say such things! We have been through so much and have always been like brothers.". Jinpachi reaches up to Wang with one of his hands and says, "Jinrei...", Wang grabs Jinpachi's hand with one of his hands and says, "Jinpachi!". Jinpachi says, "I wish we could have had one last drink together...but I'm afraid my time has come... Good bye, my dear friend... It was fun..." Jinpachi turns to dust in Wang's arms. Wang runs his fingers through the sand that was Jinpachi while saying, "Jinpachi... Jinpachi!..." Wang continues talking, saying, "It's the curse of the Mishima bloodline!..." Wang gets up while saying, "Jinpachi...it appears that my time has yet to come!" A shooting star flies across the sky.

Wang was utterly defeated in The King of Iron Fist Tournament 5 by Jin Kazama, whose purpose was to wipe out the Mishima family's cursed blood. However, the real chaos began when Jin Kazama assumed control of the Mishima Financial Group (MFG).

Blaming his failure on his indifference, Wang lamented his lack of action.

Ending Description: Following his victory over Azazel, Wang prepares to leave before sensing Azazel's presence behind him. But as the monster was about to attack, Wang used a powerful elbow attack right on his foe's spine (though apparently it was the tail), causing the latter to disperse into a orb with magneta-colored scarabs fading into nothingness.

Yet, it also took its toll on Wang as he murmurs "Jinpachi..my friend. My time has come." before falling onto his knees, saying "I'll see..you again..." as he falls onto the ground. 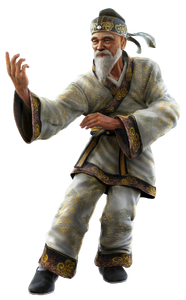 Retrieved from "https://hero.fandom.com/wiki/Wang_Jinrei?oldid=2180636"
Community content is available under CC-BY-SA unless otherwise noted.