Start a Wiki
Warlic The Blue Mage is one of the most powerful NPCs in the game. In fact, he's so powerful that he rarely interferes in anything because he can't risk his power getting out of control. Has a rivalry with Xan that goes way, way back. He dies in Nythera's first quest chain, but later comes back from the dead to save her from her own mistakes.

The Archmage Warlic is tall, wears blue cloak with fur trimmings and has silver-white hair. If you talk to him, he will actually call himself a "blue mage." He's over 5000 years old.

He shows an instant interest in the Player, as soon as he discovers your newly-created record, in the Enrolment Exam. His own office is found on the fifth floor of G.E.A.R.S. University. When you arrive there you feel as if something is watching you. Warlic is a brilliant Mecha Pilot and can be battled at the Star Captain's Club, in East Soluna City, on the first floor in the 'Assault Mecha' video game. In this game, his ID Number is 2 and he goes under the name "Evil Jim". Dean Warlic sends you on many missions including "Defend Soluna City", "Tibattleonia", and "Rescue!". 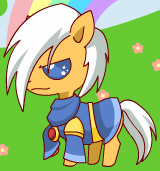 Add a photo to this gallery
Retrieved from "https://hero.fandom.com/wiki/Warlic?oldid=1592217"
Community content is available under CC-BY-SA unless otherwise noted.