Escape from his father Magus and the Technarchy (succeeded) Protect mutant and mankind (In progress), help Sunspot with the new A.I.M.

Warlock is an alien cyborg called a Technarch form a the planet Kvch. Warlock was introduced as a subplot in New Mutants #18 he joined the titular team in issue #21.

When a Technarch is born the infant has to fight there parent for the right to live Warlock did not want to fight his father so he fled. When he came to earth Warlock thought he was safe but his dad followed him to earth. After waking up from his crash landing he meet Wolfsbane, Sunspot, Cannonball, Magik, Moonstar and Magma the New Mutants who brought in Cypher to understand stand him. When his power was restored he joined the team and became friends with Cypher.

Warlock is a techno-organic being, capable of shapeshifting extensively. This ability is natural for a Technarch; Warlock's "mutation" is actually his morality, as non-mutant Technarchy are amoral and have a violent tendency to convert innocent organics into techno-organic matter to feed on. Warlock has the ability to do the same, but uses it as a last resort. Warlock also has amazing energy absorption and projection abilities, and has a very quick healing factor because of his shapeshifting abilities. 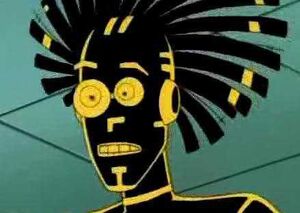