Avenge his father (formerly)
To beat Speed and Lash at Save the Citizen with Will (succeeded).
Help stop Royal Pain (succeeded).

Reformed Anti-Hero
Warren Peace is a false antagonist (later triagonist) in Sky High, and Will Stronghold's former "arch-nemesis". He is a very feared student in the school, mostly because his father was a supervillain named Baron Battle, and his mother was a superhero with an unknown name. Since Will's arrival, Warren followed him closely to avenge his father's arrest by The Commander's (Will's father) hands.

Warren appears first in the movie staring at Will and his friends from across the cafeteria. In his next appearance Lash pranks both him and Will by tripping Will over making him crash into Warren and spill food all over him. Warren then confronts Will and Will while trying to be reasonable only makes things worse for himself and causes a fight to break out between the two. Will is ultimately victorious since he received his powers mid way through the battle but the two are both sent to detention. In detention Will tries to make amends with Warren, Warren agrees to leave him and his friends alone but if he crosses him again he'll retaliate. He next appears during the Save The Citizen Game when Lash and Speed challenge he and Will, the two ultimately work together as a team but Warren still holding a grudge on Will and refuses to make amends once again. He next appears at the Paper Lantern Chinese restaurant where he sees Layla who was waiting for Will who promised he would meet her there. Warren and Layla have a long discussion in which they form a friendship and he encourages her to tell Will how she feels about him, this discussion lasts until his boss orders him to the front desk. The next day Layla being jealous over Will going to the prom with Gwen instead decides to form a plan with Warren to make Will jealous which he reluctantly agrees to do but says he won't wear a tuxedo.

At this point all of Layla's friends aside from Will begin sitting at his table and won't leave him alone much to his annoyance. On the night before the homecoming Will after his breakup with Gwen is sitting in the Paper Lantern waiting for Layla. Warren finally lets go of his grudge against Will and he reveals to him the truth about Layla and the plan although he does point out how Will does deserve to be shut out and ignored by his friends for treating them so poorly. On the night of the homecoming Warren decides to wear his dad's tuxedo otherwise it'd be going to waste. After Royal Pain begins her attack with the pacifier Warren burns an air duct vent so he, Layla, Ethan, Zach and Magenta can escape from the hall. He then fights off Speed with the assistance of Ethan. At the end of the prom with nobody to dance with a girl with ice powers approaches him and the two begin to dance with their powers reflecting each other as they held hands. At the end of the movie he becomes best friends with Will and the boyfriend of the ice powered girl. 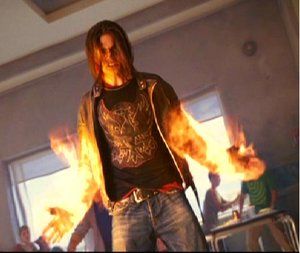 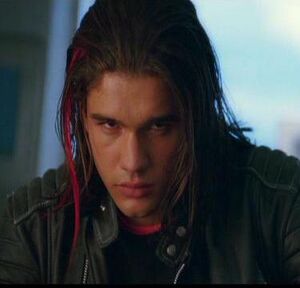 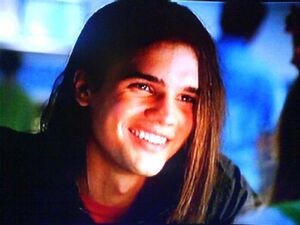 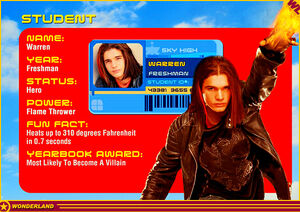 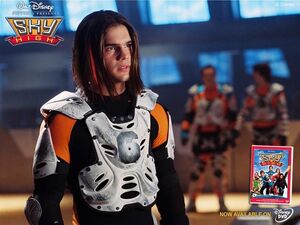 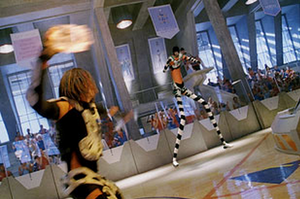 Retrieved from "https://hero.fandom.com/wiki/Warren_Peace?oldid=1418957"
Community content is available under CC-BY-SA unless otherwise noted.