Wash Buckler is a Mermasquid pirate in Skylanders: Swap Force.

He is voiced by John DiMaggio who also voiced Wallop, Pain-Yatta, Bender from "Futurama", Jake from "Adventure Time" and many others.

Wash Buckler was an orphan Mermasquid, who grew up on one of the roughest pirate ships in Skylands. While most pirates were interested in pillaging and plundering, Wash Buckler had other ideas for the future of pirating. Over the years, he earned the respect of his crew and eventually convinced his fellow pirates that they didn’t all need to be cantankerous bad guys. Thus, they set forward doing heroic deeds. Of course, this new good guy image did not sit well with other pirating crews, who attempted to sabotage Wash Buckler at every turn. But he was no ordinary pirate, and he defended his ship and his crew against the many attacking hordes. It was then that Master Eon took notice of Wash Buckler and asked him to join the Skylanders. 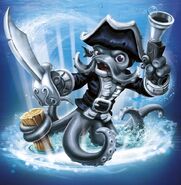 Retrieved from "https://hero.fandom.com/wiki/Wash_Buckler?oldid=2178261"
Community content is available under CC-BY-SA unless otherwise noted.