Professor Washu Hakubi is the greatest scientific genius in the universe and the key character in the Tench Muyo metaseries. Washu plays many different roles throughout the Tenchi universe, from an escaped criminal assisting Ryoko in her piracy career, to an imprisoned "demon", but like the rest of the Tenchi cast, her core personality traits are retained no matter which story is being used.

Washu creates an inter-dimensional laboratory in the closet of the Masaki house, although her laboratory is a lot bigger in the OVA series than in recent seasons. She even created Ryoko Hakubi her greatest creation and daughter. Washu also created Ryo-Ohki and is one of the Chousin; three sister goddesses who created the multiverse, the other two being Tsunami and Tokimi. In order to solve the riddle of finding someone more powerful than them, Washu chose to seal her godly powers and consciousness into three gemstones and descend to the third dimension in order to analyze the mysteries of the multiverse. 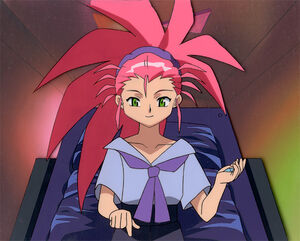 Add a photo to this gallery
Retrieved from "https://hero.fandom.com/wiki/Washu_Hakubi?oldid=1615471"
Community content is available under CC-BY-SA unless otherwise noted.