He is a novice mage, the first of his family to seriously study Magecraft and the master of Rider during the Fourth Holy Grail War, which he wishes to win so that the Mage's Association will recognize his genius.

He is voiced by Daisuke Namikawa in the Japanese version of the anime and Lucien Dodge in the English version, the latter of whom also voices Dust in KonoSuba: God's Blessing on this Wonderful World! and Jafar.

Waver Velvet is a nineteen year old student at Clock Tower, an institute of the Mage's Association, and a magus with a recognized magical lineage of three generations. While he is talented, he is not recognized by his peers or lecturers.

An intelligent young man, Waver came up with the revolutionary concept that a mage's power could be increased through effort, experience, and knowledge rather than increasing magical potential through that of a mage's heirs. His idea is dismissed by his lecturer, the nobleman Kayneth Archibald El-Melloi, who tears up Waver's manuscript without another thought.

Waver is not courageous by nature and somewhat short-tempered, cowardly, and whiny. When he met his teacher again at Fuyuki City, he was scared and frightened by hearing such horrifying words to him. During their search and find of Caster's lair, Waver was disgusted to the point of vomiting at the sight of the inhumanly murdered and mutilated corpses of children. Waver also stood up to Archer who was the most feared Servant of the grail wars. These events all signify Waver's inner sense of justice and courage.

After becoming Lord El-Melloi II, he takes on a reputation as a famous lecturer of the Clock Tower. His involvement with Rider changed his attitude, allowing his persistent effort to lead to him being called a professor. He cares little about his reputation, and he would rather focus on his own success as a magus. His irritations towards it have even caused people to say that he has haunted the school with a constantly cranky look to him for several years. He is not an ambitious person, and he does not like to become personally involved with his students, He dislikes people calling him Lord El-Melloi without the "second" because it is unbearably grating without it.

Shortly before the Fourth Holy Grail War, Waver Velvet's theories that a mage could become more powerful through experience rather than genetic lineage is dismissed by his lecturer, Lord Kayneth Archibald El-Melloi. Outraged and humiliated, Waver discovers that Lord El-Melloi will particpate in the Fourth Holy Grail War in Japan. After stealing the artifact El-Melloi intends to use to summon his Servant and running off to Japan, Waver intends to win the Holy Grail in order to force the Mage's Association to recognize his genius. Using the stolen artifact, he summons the Rider-class Servant, Iskander. The two of them stay with Glen and Martha Mackenzie, an elderly Canadian couple living in Japan, for the duration of the war. The couple, thanks to Waver's magical abilities, are under the impression that he is their grandson. Waver is youngest Master in the Fourth Holy Grail War.

Though an adept mage, his confidence in his own skill comes off as arrogance. Waver is not courageous by nature and somewhat short-tempered, cowardly, and whiny. In contrast, his Servant Iskander, the King of Conquerors, is noble and physically overbearing. Much to Waver's chagrin, the enormous man has little interest in the Holy Grail and cares more about conquering the world again, especially now that he realizes the world is much bigger than he was aware of during his life and is particularly fascinated by ordinary aspects of modern life. The Master and Servant have difficulty getting along at first due to differing personalities and Rider's self-centered nature makes him especially difficult to control and Waver finds himself accommodating his interests to his Servant's to ensure Rider remains focused on defeating opposing Servants.

Despite their differences they had a very close bond of friendship, similar to that of a father and a son. This is evident in the fact, that on their first encounter with the other servants and masters of the war, Rider defended his master's dignity after Waver was being tormented by his Lecturer Lord Kayneth Archibald El-Melloi, who was threatening to make Waver suffer for stealing his artifact and entering the Grail War with the servant he was intending to summon. Rider rebukes Kayneth by calling him a coward, saying that someone like him could never be his master even he really was summoned by Kayneth.

As the Holy Grail War continues, Waver and Iskander's friendship strengthens, Iskander teaches Waver how to live like a man. On the final day of the war, Waver decides it is too dangerous for him to continue participating in the war and uses all three of his Command Seals to order Iskander to defeat all the remaining Servants, win the Grail, and not to return unless he succeeded. By using all of his Command Seals, Waver effectively abandons his position as Rider's Master and allows the Servant to do as he wishes. However, Iskander insists that Waver stand at his side as he rides off to his final battle as his friend, rather than his Master.

During his battle with Archer, Iskander uses his final Noble Phantasm: Ionioi Hetairoi. However Gilgamesh uses his Anti-world Noble Phantasm to destroy Iskander's Reality Marble in an instant. As Iskander and Waver manage to evade the blast, Iskander asks Waver if he wants to be his subordinate, which Waver accepts. Iskander orders Waver to live and tell the story of his king, leaving Waver in a safe location to observe the battle. When the King of Conquerors is defeated by the golden Servant, Archer confronts

Waver. Though he is afraid, Waver courageously stands up to Archer, declaring that he is a follower of Iskander and that he has been ordered to live for Iskander's sake. Out of respect for Iskander's final wishes, Archer spares Waver's life.

Waver had survived the fourth Grail War, and returned back to Mackenzie house safely. The time he spent with Iskander has positively influenced him, he wanted to stop studying for a while and travel, experience and understand the outside world. He decided to stay in Japan for a while and asks Glen and Martha for permission to stay at their place. When he looks around his room and finds the game that Iskander brought earlier, Waver at first thought it was silly but decides to try new things out and realizes he likes playing video games after this. After the war, he expresses several regrets: he wonders if the conflagration caused by the end of war could have been prevented if he and Iskander had still been around and also that he wanted to be Iskander's friend as a equal rather than a subordinate.

At some point, Waver returned back to London. At the command of the El-Melloi Lords faction within the Mage's Association, the Archibald family was left in ruins after the ninth head, Kayneth Archibald El-Melloi, was assassinated in the Fourth Grail War.

Although Kayneth and Waver did not get along, Waver was still Kayneth's unofficial apprentice and he helped the Archibald family recover. With the situation cleared, the tenth head of the family, a little girl from the lowest branch of the clan, appointed Waver with the title "Lord El-Melloi II" as his reward:

"I recognize your deeds to the Archibald family, but since you were only making up for what you caused in the first place, you better serve me for your entire life."

Lord El-Melloi II later encounters Gray and takes her to London as his apprentice.

As Lord El-Melloi II, Waver Velvet is now 29 – 30 years old and is Rin Tohsaka's lecturer at the Magus Association. He possesses an interest in the popular culture of Japan, though he likes little else about the country. He is also the only surviving master of the Fourth Grail War, following the deaths of Kiritsugu Emiya and Kirei Kotomine.

Ten years after the end of fifth Holy Grail War (on the Fate and Unlimited Blade Works routes), Lord El-Melloi II arrived in Fuyuki and, together with Rin as the head of the Tohsaka clan, set out to completely take apart the Great Grail. While the Association was planning on bringing back the Greater Grail, they were completely opposed by the Church. After the end of a great turmoil of the same magnitude as the Grail War, the Greater Grail was completely dismantled and the Grail Wars of Fuyuki came to a complete conclusion.

Although not canon to the Nasuverse, Waver's student Flat Eskardos had participated in the Holy Grail War. He is shown in the cover of the Fate/strange fake fanfiction.

Waver is the tutor of Rin and Luvia, he was in distress about how to handle both of them until Zelretch intervenes.

Waver is skilled as an alchemist, as he was shown performing alchemy on water samples taken from the Fuyuki river to test for magic traces, which led to him and Rider discovering Caster's workshop.

He is also shown to possess the ability of Memory Manipulation, which he used to alter both Glen's and Martha MacKenzie's memory, making them believe that he is their grandson.

He improves his ability enough over time that he has no trouble declaring that he is a powerful archmagus as of becoming titled Lord El-Melloi II, but his skills as a magus are still hopelessly average. His true talent is realized as a lecturer due to being the best person at detecting the hidden talent of others and training it. Magi that study under him as students receive no less than the rank of Grand, and it is said they could change the entire internal power structure of the Clock Tower if they were to gather under him. His works as a talent production are regarded as the greatest masterpieces of their time, but he doesn't really care because he is more focused on becoming a successful magus himself.

Upon succeeding the El-Melloi title, he inherited Kayneth's Mystic Code, Volumen Hydragyrum, and he was able to improve its functions by modifying it into a kind of humanoid automaton, Maid Golem, that is similar to the liquid metal Terminator. While it normally does chores, it seems there is a troublesome bug that causes it to run out of control while insisting that it is a killer robot from the future. This may be because of a harmful movie it was shown during its developmental stages. 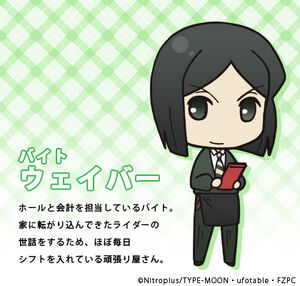 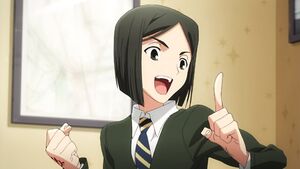 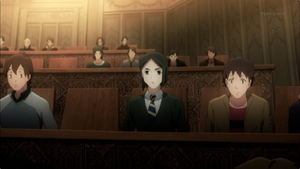 Waver at the Mage's Association 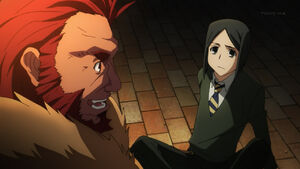 Rider berating Waver for being a coward 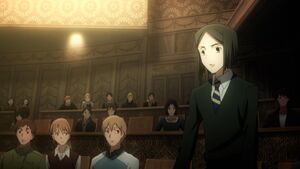 Waver addressing his opinion on magic experience in London 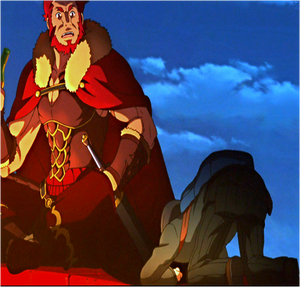 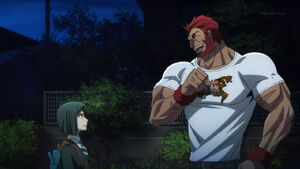 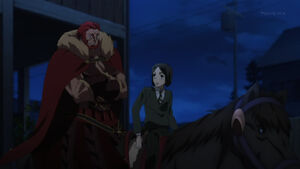 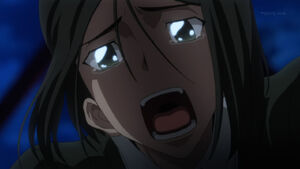 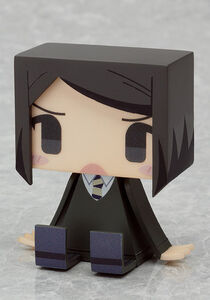 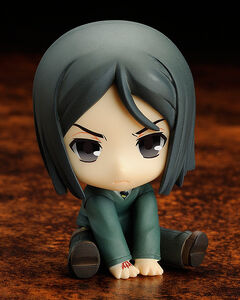