Heroes Wiki
Register
Don't have an account?
Sign In
in: Articles under construction, Ben 10 Heroes, Cartoon Heroes,
and 19 more

Ben 10: Secret of the Omnitrix

To protect the Planet Earth

Giant Alien, Clone Transformation
Way Big is the Omnitrix's DNA sample of a To'kustar created in Cosmic Storms. He is 150 feet tall with the ability to move at fast speeds and create a cosmic storm and has invulnerability, a To'kustar's only weak point is his fin, which momentarily paralyzes him when struck.

Gaining the ability to become Way Big in Ben 10: Secret of the Omnitrix, after Azmuth decides to deactivate the "Self-destruct mode" of the Omnitrix, Ben uses this form's size to his advantage. He was also seen in the non-canon episode "Ken 10" where Ben 10,000 fights Kevin 11,000 when he defeats Kenny. In Ben 10: Alien Force and Destroy All Aliens, the spikes on his hips and shoulders are gone and he now has green eyes. Way Big has great strength as shown in Ben 10: Ultimate Alien episode "The Ultimate Sacrifice" when he easily defeated all 6 Ultimates. He also has great strength on objects his size such as in "Primus" where he threw Vilgax into orbit, despite him being his own size. Also in "The Widening Gyre" he threw the garbage monster into the sun, despite it being relatively bigger.

In Ben 10: Omniverse, Way Big has his new design similar to his original. He also now speaks in a distorted voice with a Japanese accent.

Way Big in Destroy All Aliens 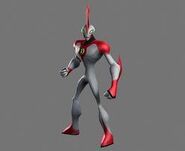 Way Big in The Original Series