Heroes Wiki
Register
Don't have an account?
Sign In
Advertisement
in: The Simpsons Heroes, Anti-Hero, Lawful Neutral,
and 40 more

To have a romantic relationship with Mr. Burns

Waylon Joseph Smithers, Jr. is a major antagonist/anti-hero and a major character in The Simpsons.

Waylon Smithers is Charles Montgomery Burns' assistant and foster son. He would do anything to make his boss happy, but his nature is not evil, in fact, he is sometimes friendly with the Simpson family and with other people.

While Mr. Burns for the best of it sees Smithers as a sycophantic toady, Waylon views him as a close friend and secretly harbors massive romantic feelings for him despite the massive age difference between the two. Despite his respect and loyalty for him, Smithers will occasionally go against his boss if he feels he's being too "diabolically evil".

His love for Burns is actually what caused his marriage with an unnamed woman to break apart as revealed in "Secrets of a Successful Marriage". A closeted gay and hopelessly in love, Smithers came close on multiple occasions to admitting his feelings for Burns during a "Do What You Feel Like" celebration he admits to his boss "I love you" but quickly recovers this with "in those colors". After which he says to himself "who am I kidding? The boathouse was the time!". Smithers on one occasion actually kissed Burns when he thought the world was about to end because of a message carved on a skeletal Angel however when it turned out to be a hoax he describes it as a "sign of my respect".

However this loyalty isn't totally one-sided. Burn's kinder side is normally brought out by Waylon, when Smithers' father died by preventing a meltdown he (presumably) raised the orphaned boy by himself. Burns was even willing to break the law by bringing pharmaceutical drugs from Canada after Smithers was overtook by his euphoria once the power plants drug plan was cancelled. Burns also made Smithers feel adequate after he berated himself for not being able to "protect" his boss from Lenny when he was drunk and in reality he only wanted to thank him for such a great night. He also forced Waylon to go on vacation when he became too stressed to be his assistant however he later callously fired Smithers after Homer taught him to be self-reliant.

Although he's much better than Burns, when pushed to his limit Smithers can be equally as bad as his evil boss. When pushed to a fault, Smithers becomes callous, misanthropic and violent. He made Burns aware of Homer Simpson embezzling the power plant's funds to buy his own Cymoxanil and regain his hair however this was more out of the intent to get him fired as Burns was slowly preferring Homer in comparison to him. In "Homer the Smithers", he violently attacked Homer in Mr. Burns' office when he ruined his plan to get rehired which actually causes his boss to be pushed out of a 3-storey window. He also shot Jasper Beardly in a drunken rage when he stopped him while he was on his way home and became a tyrant when he was a temporary boss and they mocked him for his soft approach.

Despite this dark side, Smithers does have morals. He ordered off the beating of Homer Simpson after Mr. Burns read an angry letter when Bart gave him a blood transfusion which Homer was expecting a reward for the deed. He was also extremely uncomfortable when Burns prepared to steal oil from Springfield Elementary and refused to take any part in his plan to block the sun. 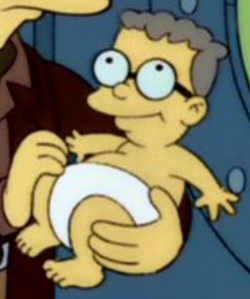 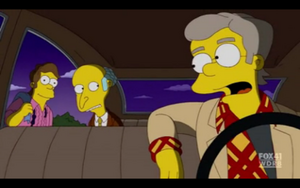 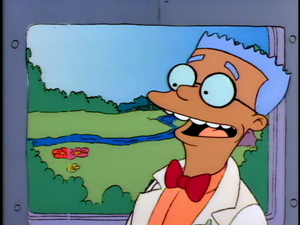 Smithers with black skin and blue hair, as seen in "Homer's Odyssey" 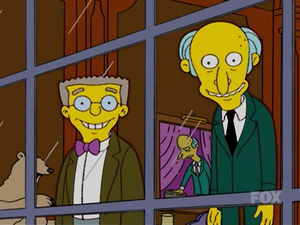 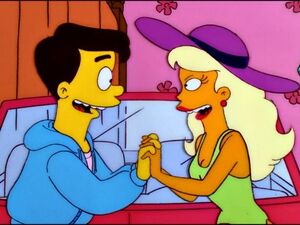 Smithers as a friend of Malibu Stacy

Smithers in The Simpsons Movie

Smithers in The Simpsons: Tapped Out 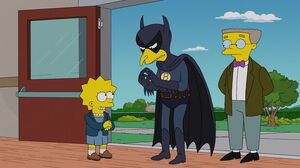 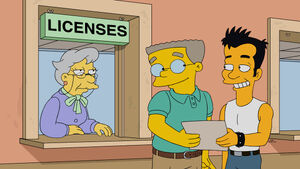 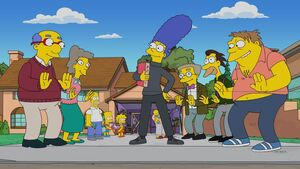 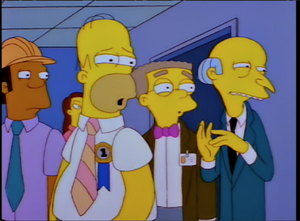