Heroes Wiki
Register
Don't have an account?
Sign In
Advertisement
in: Articles under construction, Spoilers, Mature,
and 24 more

Weather Report, real name Wes Bluemarine, is a supporting protagonist featured in JoJo's Bizarre Adventure: Stone Ocean. He is an amnesiac prisoner who seeks his memory and allies himself with Jolyne Cujoh. He is Enrico Pucci's fraternal twin.

Weather is a man of above-average height and medium to athletic build. He usually wears white buffalo hat and a dark bodysuit.

Weather was a mellow and eccentric man. He would boldly stand a few inches next to others to get their attention rather than calling their names and always walks with his toes. But at the same time, he was trustworthy and compassionate, rescuing those in need without caring for his own safety. He is also revolted by any form of injustice, describing his twin brother as "the worst evil".

However, after Weather regained his memories, he became more sinister. While still retaining his previous passion with his friends, he is now not afraid to flaunt his powers for his own amusement. 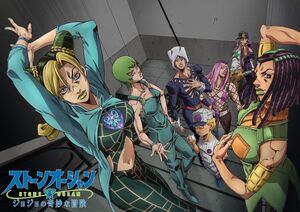